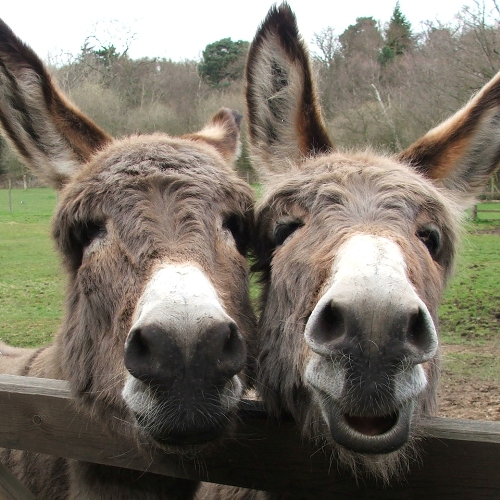 Retold joke on why men earn and why women spend money.

Using comical equations, Satyadev shows that both are donkeys.

"What are you haw hawing about?" Rosh asked her, looking up from the book he was reading.

"Came across some funny algebra like equations," she replied, reading aloud from her magazine.

"What do you think of that?" she asked him.

"A human is a donkey who enjoys his work," offered Rosh.

"Interesting interpretation," she smiled. "But Satyadev concludes that Human - Enjoy = Donkey + Work. So in simple English, a human who doesn't know how to enjoy is a workaholic donkey."

It was comical. He put his book down, and turned towards her in the bed. It was obvious from the look on her face that she had some more jokes ...

She continued onto Equation 2:

"What do you make of that?" she asked.

"A Man is a donkey who earns money," suggested Rosh. "An earning donkey!"

"That's hilarious," she giggled at him. "But Satyadev concludes that Man - earn money = Donkey. So, a man who doesn't earn money is a donkey."

"Has he got any formulas on women too?" Rosh asked.

"What does our in-house mathematician infer from that?" she teased him.

"A Woman is a donkey who spends money," smiled Rosh. "A spending donkey!"

"On the contrary," she clapped delightedly. "Satyadev concludes that Woman - spend money = Donkey. In other words, a woman who doesn't spend money is a donkey."

"Any other clever deductions?" Rosh was laughing now, gracious in defeat.

"You are game for punishment today," she chortled. "Yea, from Equations 2 and 3, Satyadev also concludes that Man - earn money = Donkey = Woman - spend money. What do you think of that?"

"So, Man who doesn't earn money = Woman who doesn't spend money," tried Rosh. "They're both donkeys. I think Satyadev is a donkey for coming up with equations like that."

She waited for him to elaborate, looking questioningly at him, but he just chuckled and shook his head, not taking her gambit this time.

"Satyadev is not a donkey," she insisted after the pause, "even though he is a man. He is a genius."

"How so?" Rosh looked at her lovingly. "You mean he's a genius donkey!"

"Yea right," he smirked. "Work your ass off, so she can spend it all. What a complementary relationship!"

It was beginning to turn him off already. She sensed the change in his mood.

"But darling," she put her magazine aside and nuzzled into him, "from postulates 1 and 2,

So, Man + Woman = 2 Donkeys that live together happily!"

"Once the donkey work is done," she asked him mischievously now, "can't we live together happily?"

"Yeah, we can," he slapped her ass. “But I’m wanting to be made happy right now.”

“Ooh,” Isha cooed in his ear. “Doesn't take much to bring out the donkey in you!”

They rolled away on top of each other in uncontrollable mirth. Their laughter awakened the slumbering timbres in the house.

‘Here they go again,’ the spider up the wall rolled up her eyes in mild amusement, and clambered up her web to grab a surer foothold.

Next Story: Who Will Make Coffee?