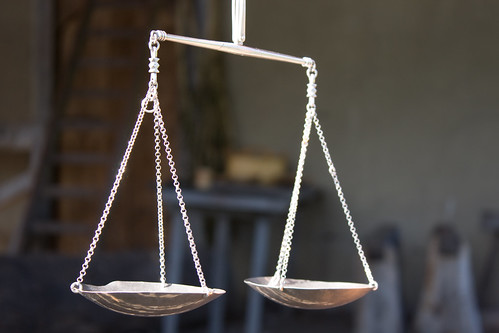 Trust once lost, is not easily regained.

She had done the dishes. Seeing them all there, she got under their duvet too. It was freezing cold outside.

"Pa's telling us the story of Ali Baba And Forty Thieves," Hosh replied excitedly. "Do you want to hear it too?"

Isha nodded. Hosh quickly summarized the story so far, for her. Then Rosh continued:

"Okay, weigh it if you must," Alibaba conceded to his wife, "but not a word to anyone."

She nodded and hurried off to Qasim's home to borrow their weights and scales.

"Do you need the big scales or small?" her sister-in-law asked.

"Small," she answered, "I don't need the big ones today."

"Wait a moment," said her sister-in-law. "I'll look around and find them for you."

'What does a woodcutter's wife need the small scales for,' thought Qasim's wife as she was hunting around for them, 'certainly not to measure hunks of chopped wood. If they are not measuring wood today, what are they up to?'

Wanting to know, yet not wanting to probe directly, Qasim's wife secretly smeared some suet under the bottom of a pan before she handed the weights and scales over to her sister-in-law.

"It's a bit of hard sticky fat from around the kidneys and loins in beef or sheep," Rosh answered. "Qasim's wife was very clever. She did that hoping that a bit of whatever it is that Ali Baba and his wife measure with the small scales, will still be stuck to the fat when the scales were returned. That way she would know without asking, what it was that they had measured with it."

Ali Baba's wife suspected nothing. She brought the scales home and began to weigh the gold.

Ali Baba was busy digging. When the money had been weighed, she helped him carefully stow most of it away into the hole and cover it back up with earth. Then she returned the scales to her relative, unaware that an Ashrafi was still stuck to the bottom of a pan.

When Qasim's wife saw the gold coin, she blew her top. Fuming with envy and anger, she relayed the events and showed the coin to Qasim when he returned home from the shop that night.

"For years, we helped them thinking they were dirt poor," she raged. "But they are so filthy rich, they don't count their money like ordinary folk. They weigh their Ashrafis! Your brother is as rich as an Emir. And he has been playing us all for a fool."

"Sobh bekheir, brother," said Ali Baba, though he was baffled to see him so early in the morning.

"Is Sobh bekheir 'Good Morning' in their language?" Josh asked.

"Kind of," answered Rosh. "And Shab bekheir is kind of like 'Good Night'. In Persian or Farsi language, Shab means night, and kheir means to be safe or to keep well. Roz means day. So 'Roz bekheir' would be like saying 'Good day to you', or 'May Allah keep you safe through the day'."

Josh understood and nodded. Rosh continued with his re-telling of the Arabian Nights tale:

"You are poor and needy, aren't you Ali?" Qasim asked. He was in no mood to beat about the bush.

Ali Baba nodded silently. He knew Qasim's temperament. Something was up.

"So poor, you can't afford to have your own scales to weigh something."

Ali Baba looked silently at Qasim. And waited. A showdown was coming. He could smell it in the air.

"So poor, you need to borrow my scales to weigh up your gold?" Qasim was beginning to tremble now, despite his efforts at restraint.

Qasim stared at him silently, getting redder and redder in his face and beginning to shake with his quickly rising anger.

"Liar!" Qasim burst out like an exploding volcano and threw the Asharfi at Ali Baba's face. "Your Asharfi was stuck to the bottom of my scales when your wife returned them yesterday."

"You robbed me of my fair share of inheritance from father. You salted away his fortune by stealth, while I went about thinking he had died leaving us nothing. I will report you to the Wali (Civil Governor) and have your Asharfis confiscated. You wait and see now. You will rot in Jail and die in ignominy. I will have my retribution."

Ali Baba realized that it was futile to argue or lie about his wealth now. Rather than cause further ill-will and mischief, he decided to take his brother in his confidence. But Trust once lost, is not easily regained.

Despite hearing his brother's extraordinary experience with the bandits and the magical cave, Qasim remained skeptical.

"Prove it!" he hissed. "Tell me where the cave is? What is the magic password? I will go and check these myself. And if you have lied, I'll go straight to the Wali."

So Ali Baba was forced to tell him the landmarks, the magical words whereby the rock face opened and closed, and the details of what the treasure trove contained. Qasim listened carefully, but he didn't really believe Ali Baba.

"You think I am a kid," he growled. "You can't fool me with your stories of magic. You've cooked up an elaborate lie to cover up your inheritance fraud."

"Check it out for yourself then," answered Ali Baba. "And stop yelling so loudly. You'll wake up the dead. Then, even they will know of the treasure."

Qasim shut up. He stared silently at Ali Baba for a very long time. Then he left.