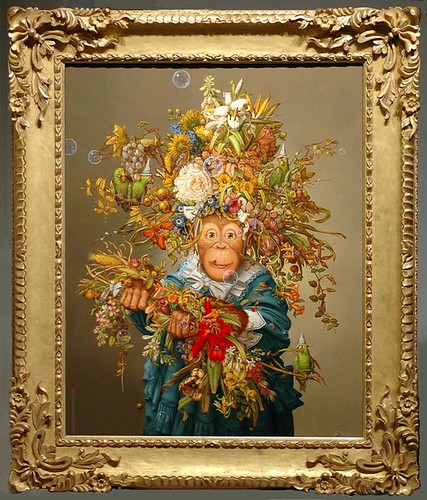 "What happened at the review today?" Isha asked.

"He patted my back," Rosh fumed. "Great work. You are a Star. But sorry, no increment. Bank Policy is Annual increments only."

"I'm sick of it," Rosh flared. "He hides behind 'Management Policy' when he doesn't want to do something. That's always the way to brick wall, if you don't want to it."

"But Company Policy?" Isha reasoned. "They can't have one rule for some and another for others, however meritorious."

"Then why not reward the shining stars when you find them? Why not reciprocate initiative with initiative, to retain it? If you pay peanuts, monkeys will come."

"And what is 'Company Policy' anyway? Lock five monkeys in a cage, and you can begin to formulate company policy."

"Get a two level cage," Rosh answered seriously, slightly offended by her mirth, "with a hole between the two levels just big enough for one monkey to squeeze through at a time. Lock up five of the buggers in the bottom level."

"Provide them sufficient food at the bottom level, but hang a banana at the top level too. That is the reward for risk, for sticking their neck out. For venturing out of their comfort zone."

"When any monkey moves up through the hole to get the banana, splash the remaining four left beneath with icy cold water. Hang another banana at the top level, when the top level monkey returns to the bottom cage."

"Every time a monkey goes up through the hole to get the banana, repeat the splashing of the remaining four monkeys with icy cold water. Then hang another banana at the top level."

"Soon enough, when a monkey tries to climb through the hole, the other monkeys will try and prevent it. Cos he gets rewarded for his initiative and risk taking while others get punished for not beating him to it. That's doubly unfair."

"So, they get programmed to not go for the banana. And programmed to stop others from having a go. That's tall poppy syndrome for you. Don't be a tall poppy. Chop the tall poppies. Cut down the out-performers, the go-getters."

"But wait, it gets worse. You can put away the icy cold water now. Remove one monkey from the cage and replace it with a new one. The new monkey sees the banana and wants to go through the hole."

"Shock and horror, the rest of the monkeys attack him. A few more attempts, a few more beatings, and learning is cemented on the newcomer that going up is taboo. Why, he knows not? But he does know that if he tries to make his way up, he will be assaulted. He's been converted!"

"Now replace another of the initial monkeys with a new one. The newcomer goes for the banana too, and gets the same treatment. Perception change is enough to result in behavioral change. He'll be converted soon enough."

"But what is more interesting, is that the previous newcomer beats up the new arrival too. With enthusiasm! And without knowing the real reason why the beatings were being given. Why does he do it? Cos that's what everyone else does here. That's company culture for you."

"None of the new monkeys was ever sprayed with icy water. That icy water is history. Nevertheless, no monkey will ever again try to go through the hole for the banana. Why not?"

"Because as far as they know, that's how it's always been around here. And that my dear, is how company policy begins. It's time someone changed it!"

Author's Note: No animals were harmed in the making of this story. Story is not based on any actual experiment. No experiment is being recommended.