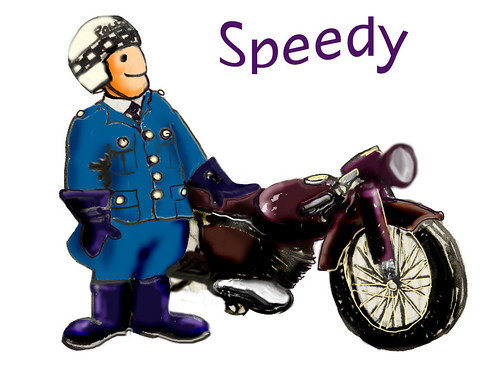 With retold joke on how a Scottish traffic cop demonstrates the difference between stopping and slowing down.

“You didn't stop at the Stop sign,” said Rosh. He had been teaching his son to drive.

Hosh had proved to be a quick learner and a safe driver, but some quirks remained.

“You didn’t come to a stop,” reiterated Rosh.

“I slowed down to a snail’s pace,” Hosh argued.

“You didn’t come to a FULL stop," reiterated Rosh. "It is important to form good habits while learning to drive!”

“But Pa,” Hosh felt irritated at being wrongfully chastised. "I looked left. I looked right. Then left again, before slowly rolling through. There was no traffic around on either side."

“A sign is posted somewhere for a reason," said Rosh, beginning to feel his temper rise. "To keep you and others safe on the road. You don’t argue with a sign. You follow it!”

“Or, would you rather we didn't have traffic signs? Or traffic lights? And the traffic can take care of itself. Like it does on Indian roads?”

“I couldn’t drive in India the last time I visited there, you know. It was every man to himself, and let the devil take the hindmost. Utter chaos on roads! Everyone's productive time lost in traffic jams everywhere."

"It is a high cost every one pays in India, simply because no one wants to follow road rules and there is not much enforcement. Leave one breach unchecked, and the dam bursts before you know it. Red lights in many parts of the world now, are mostly only for pedestrians."

"Pa, you're being pedantic,” protested Hosh. “We were in the middle of nowhere here. It was safe on both sides. There wasn’t any need to stop!”

“You're being smart now,” grumbled Rosh. “Like that hot-shot lawyer who ran up a stop sign, and got pulled over by a Scottish Traffic Policeman. You know what happened to that smart alec?”

“No, Pa! What happened?” Hosh asked, careful now, as he negotiated his car as well as his father’s temper.

“There is a difference between Stopping & Slowing down," replied Rosh. "This highly educated lawyer thought he was smarter than the simpleton law enforcer on the street. So, he decided to twirl the cop around his finger with his legalese."

When he pulled over, the cop asked for his Licence and Registration.

"Ye didnae come to a complete stop at the stop sign," said the cop.

"I slowed down, and no one was coming," replied the lawyer.

Cop: "The difference is, ye huvte come to a complete stop. That's the law. Now, Licence and registration please!"

Lawyer: "If you can show me the legal difference between Slow down and Stop, I'll give you my papers and you can give me the ticket. If not, you must let me go."

As soon as the lawyer stepped out of his car, the cop started beating the shit out of him with his baton. When the shocked lawyer yelled in pain, the cop asked him, "Dae ye want me to stop, or just slow doon?"

Hosh laughed, despite the tension he felt, as he slowed down at the Stop sign before the next intersection.

“So, what did you learn?” asked Rosh.

“Not to get smart with a cop!” Hosh laughed again, coming to a full stop before the solid yellow line. “Did I do it right now, Pa?”

“No!" said Rosh. "You did not indicate left, coming up to the intersection."

“But Pa, I was driving in the left lane, and I was going to turn left!” Hosh protested.

“Communication is very important while driving,” Rosh retorted. “I heard this story once …”

Hosh could have sworn a traffic light winked at him, as he drove off into the road at his left.