Who's Sinking Your Boat? 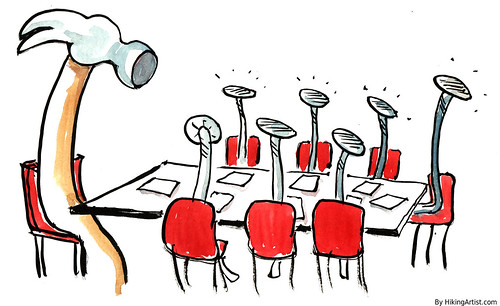 "Why did you resign?" Josh asked his father, as they started their daily trek.

"I was a man with an unusual problem", Rosh answered, "My immediate boss did not want the spectacular results I was producing, but my senior management wanted it."

"My boss had always reported, and perhaps always believed that management sales targets could not be achieved in that location because it was a lower socio-economic area."

"And he had been right. They had never been achieved in the history of that area. Until I came along."

"Not only did I achieve them, I got 400% of my targets. Now what would you have expected after doing all the hard work, if you were me?"

"I got plenty of that", Rosh laughed, "though of the wrong kind. My peers and my boss hated my guts, my hard work, my dedication, my passion, my engagement."

"A Job was supposed to be a 9 to 5 thing that you had to do for the reward it gave you. For the money you got, to do the things you really wanted to do. Before I came along. And rocked the boat too hard."

"Yes, I wanted recognition. Who doesn't? Perhaps that's why I gave it all I had. But I didn't just want empty words and useless certificates. I wanted money too. Praises don't pay the bills, money does."

"I wanted monetary recognition too, that reflected the discretionary effort that I chose to put in. The incremental effort that produced dazzling results. In areas where none had existed ever before, in the history of the company."

"I breathed my work. I lived it. There were times earlier in my life, when I almost died for it. But you shouldn't actually die for anything, cos all you get if you are lucky is a medal. What good is a medal?"

"Because I got wired up differently", Rosh answered, "I'm now incapable of giving less than my 100% at anything I do. Anything worth doing, is worth doing well."

"Do your best at whatever you do, Krishn had said in Gita. So, I do. Even when I know that doing it will most likely bring me grief in the end. But you listen up. You don't have to be like me."

"You can learn from my mistakes. If you want a more successful career and peer relationships, do as I tell you to do, don't do as I do."

"I served my customers and they loved me back. I produced results which were so spectacular, they were obscene. But when I did my job too well, my peers felt embarrassed, not inspired."

"They felt I was showing off, that I was exposing them for never working hard, not knowing how to, for never trying."

"When I did my job too well, I was in danger of embarrassing my manager in front of his bosses, because he had claimed targets couldn't be met. Yet I was doing it, month after month."

"You might have heard people being fired for not doing well, but there are many whose careers are destroyed simply because they do too well. Too well for their own good."

"I was never in danger of losing my job, but I became more and more aware of the negativity and resentment surrounding me. The work environment became toxic."

"The potential for embarrassment motivates people to do and avoid all kinds of things against their better judgment."

"Jerry Seinfeld once joked for example, that for most people, the fear of public speaking ranked higher than the fear of death. This means they'd rather be hit by a train than potentially look foolish in front of others."

"So if you want a boring but peaceful life, a successful but unscintillating career, try not to imperil it by doing or saying things which upset authority. Let them have the first say, the final say as well as all the say they want in between."

"A sales representative, an administration clerk, and a manager were walking to their carparks after work, when they found an antique lamp."

"They rubbed it. And presto! A Genie emerged."

"I'll grant each of you one wish for setting me free", the grateful Genie said.

"I want to be in the Bahamas" said the admin clerk, "riding a speedboat in front of my massive villa on my own island. Rich, and without a care in the world."

The Genie snapped her fingers. And puff! She was gone.

"I want to be in Hawaii" said the sales rep, "relaxing on the beach with my personal masseuse, an endless supply of Piña Coladas and the love of my life."

The Genie clicked her fingers. And puff! He was gone.

"I want those two back in the office, everyday, on time", the manager replied.