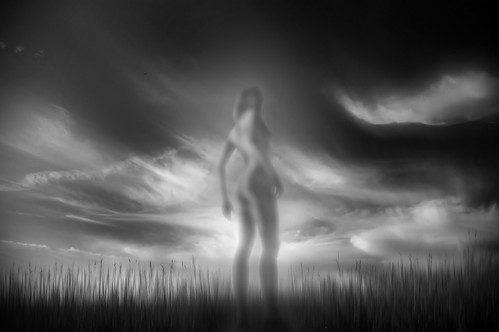 Isha sneaked into the bed quietly and snuggled into her husband's warm body.

"I am scared," she whispered silently to his sleeping form.

They had watched a ghost movie called Paheli (meaning Puzzle, in Hindi), together that evening.

The half-asleep Rosh awoke with a start, then settled back slowly in their bed, trying to regain his slumber.

"Don't be," he mumbled, hugging her tightly to him. "It was only a movie."

"How do you make a ghost go away?" she asked again, staring wide-eyed into the darkness.

He awakened fully now. He sensed her stiff body, her cold hands under the covers. He took them in his own warm hands and spoke quietly into the night, "The wife of a man, once became very sick. So sick, that it was time for her to go."

"For several years after her death, the husband grieved her loss. Life passed him by, as he stumbled through it for a while, but then he met someone and fell in love with her."

"As their affair got serious and he began to contemplate marrying again, the ghost of his former wife started appearing in his dreams. The apparition blamed him for not keeping his promise, and every night thereafter, started returning to taunt him. Haunt him."

"She would remind him of everything that had transpired between them, even to the point of repeating, their conversations verbatim. It upset him so badly that he began losing his ability to sleep at all. His bedside table became piled with sleeping pills, but his condition got from bad to worse."

"Desperate, he sought the advice of a Zen master who lived nearby."

"This is a very clever ghost," the master said, upon hearing the man's story.

"It is!" replied the man. "She remembers every detail. What I say. What I do. She knows everything!"

The master smiled, "Indeed, she does. She knows that you are in love with this other woman now."

"And knows that you want to marry her."

"Do you really want to marry this other woman?"

"And you really want the ghost of your dead wife to release you forever?"

"Then I will tell you what to do, the next time you see the ghost."

That night, when the ghost returned, the man responded just as the master had advised.

"You are such an omniscient soul," the man said. "You know that I can hide nothing from you. If you can answer me one question, I will break off with the other woman and remain single forever after."

"Ask your question," the ghost replied.

The man scooped up a handful of pills from his bedside table and asked, "Tell me exactly how many pills there are in my hand."

"Instantaneously, the ghost disappeared and never returned. Can you guess why this was so?" Rosh asked as he concluded the story.

"Because the ghost had came from the man's own mind," Isha responded. "He had created it. That's why she knew only what he knew. It was his own guilt that came to haunt him."

"The Buddhist master wanted him to realize that the ghost existed in his own mind. Only in his own mind! It had never really existed outside, like a pink elephant does not exist outside the mind."

"Could it be that ghosts exist outside the mind, but they may not be all knowing. They may be just like us. So, she knew a lot about him, but not everything. Honoring a deal, jealousy, these traits make her very human-like anyway."

"Why would she know about an ambush, but want to be ambushed regardless?" Isha was bewildered. "Know about the number of pills, but vanish and release him forever. A sudden change of heart, only when she had been put to the test."

"Why indeed?" he whispered softly. "Why did she disappear? Or choose to disappear?"

Isha pondered long into the night on that. When he hadn't spoken for a while, she turned to look at him. Sometimes, just looking at him gave her a clue to what he was really thinking.

He was already fast asleep. Sleeping like a baby. Free of any doubts or inhibitions.

She snuggled back into him. The warmth of his body tucked her away slowly into a drowsy haven. For a while...