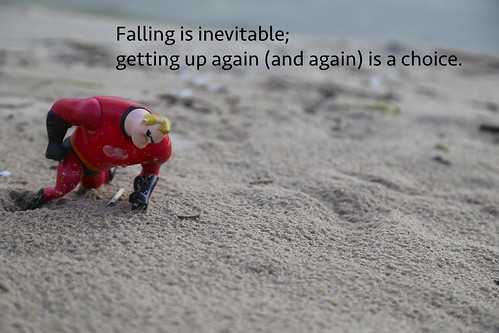 “I have been spending all this time with Josh”, Rosh said glumly, “but it doesn’t seem to be working.”

He was walking today with his elder son, discussing what else he could do to bring about change in his younger son’s thoughts and life.

All his efforts to date seemed to him, to have been in vain.

Hosh looked compassionately at his father.

“As a father”, he consoled, “You have done your duty. Your duty was to guide and counsel your child, and you did that. You also led by example. There’s not much else you can do.”

“But to what avail?” Rosh still felt miserable, “Doing one’s duty is not enough, is it? Not when all that effort remains fruitless, after trying so hard, and for so long.”

Father and son walked silently through the bush for some time.

“Sometimes”, Hosh said after some deliberation, “Change is not obvious on the surface, though it is happening. Sometimes, we can just be looking in the wrong direction.”

“A man was sleeping one night in his house when suddenly his room filled up with light. God appeared.”

“The Lord told the man He had work for him to do. He pointed at the large rock in front of his house, and said, “Push against this rock with all your might.”

“Then the Lord was gone, and darkness returned to the room. The man got up from his bed, went out and pushed against the rock with all his might.”

“The rock did not budge and after a while, the man got tired. After he had rested a while, he got up again and pushed against the rock again.”

“Not much happened. But the man kept at it, day after day. Days became weeks, weeks turned into months.”

“The man toiled from sun up to sun down, his shoulders set squarely against the cold, massive surface of the unmoving rock, pushing with all of his might.”

“When still nothing happened, despair started creeping in. Each night he would return to his room, sore and worn out, feeling that his whole day had been spent in vain.”

“Despair led his weary mind to doubt: "I have been pushing against that rock for a long time, and it still hasn't moved."

“Had he dreamt it all up? Had the Lord really wanted him to do such a fruitless task? Had he heard the Lord right? Had he let the Lord down?”

“The task was impossible or he was a failure, he thought. Doubt discouraged and disheartened him, and continuously sapped his strength. It eventually opened the doors to Temptation.”

‘Why kill myself over this?’ he contemplated, ‘Just put in the time giving the minimum effort, and that will be good enough until my time is done.’

"So that's what the weary man decided to do. He took his troubled thoughts to the Lord in prayer the next day, communicating his plan.”

"Lord," he said, "I have labored long and hard in your service, putting all my strength to do that which you expected from me.”

“Yet, after all this time, I have not even budged that rock from its seat. What is wrong? Why am I failing? Perhaps I misheard you and have toiled in vain.”

“God responded compassionately, "My son, nothing is wrong. You aren’t failing. And you haven’t misheard or misinterpreted me. When I asked you to serve Me and you accepted, I gave you the task to push against the rock.”

“This you have done, unfailingly and to the best of your abilities. Your task was to push. Never once did I mention to you that I expected you to move it.”

“You come to Me with your strength spent, your resolve wavering, thinking that you have failed Me. But, have you really failed?”

"Look at yourself. Your arms are strong and muscled, your back sinewy and bronzed, your hands callused from constant pressure, your legs now massive and hard.”

“Through opposition, through the rock’s resistance, you have grown much. Your abilities now surpass that which you used to have.”

"True, you haven't moved the rock. But your calling was to be obedient and to push. To exercise your faith. And trust in My wisdom. All this, you have done.”

“When we hear a word from God,” Hosh concluded, “we use our own intellect to decipher what He wants.”

“What He actually wants is just our obedience and our faith in Him. By all means, exercise the faith that moves mountains, but know that it is still God who moves the mountains.”

They walked quietly together for a while. Rosh was at peace again, his weary mind consoled, his batteries recharging.

'Amazing!’ he thought, ‘How God appears to those who are deserving. And miraculous, how they are able to get back through to Him.’

‘Yet these communication channels remain open to us all. As Intuition and Prayer. Intuition, when God phones us up. And prayer, when we are telephoning God.’

When the two sat down on a fallen log to rest, his finger subconsciously traced the words on the forest floor:

P= Persevere
U= Until
S= Something
H= Happens

‘Afterall, our greatest glory is not in never falling, but in rising every time we fall.’