The Wolves Within Us 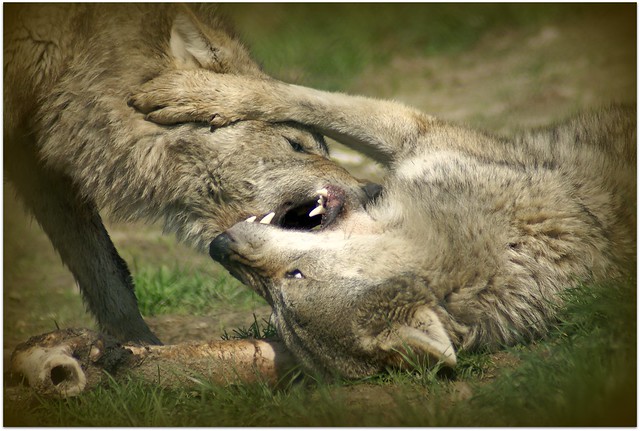 "I sometimes feel like doing some damage," Josh's eyes were filled with tears, "they are so unfair."

"They are not my schoolmates, but curses that plague me constantly. It annoys me so much, I don't know what to do with them... Or myself... Anymore."

'He's falling to pieces', Rosh thought, 'that's why he doesn't talk much these days.'

He looked at his son with a great sadness and felt his loneliness.

When tears had stopped rolling down his son's cheeks, he got up silently and started walking towards the summit. His path meandered up through the bush.

He pondered on his son's critical mental condition. Josh was angry like him, but he had never seen him so despondent. Friendlessness must have been eating away at his spirit.

"Have you nothing to say?" Josh asked him, when he had had finally caught up with his father.

He had been perplexed by his father's lack of response. He had expected something from Rosh - advice, questions, growling, even his anger perhaps. Anything but silence and walking away.

"You are walking the same path," Rosh started speaking, "that I have trekked before. I tried to guide you all my life, protect you. Save you from these experiences. But you make the same mistakes I did. The school of hard knocks will keep teaching you till you eventually learn."

"Like you, I too, have felt a great hate for those that have taken so much, with no sorrow for what they do. But, hate wears you down and does not hurt your enemy. It is like taking poison and wishing your enemy would die."

"Like you, I too, struggled with these feelings. Until I came upon a profound realization. That I was looking for answers to my problems in the wrong places. The answer did not lie outside me. It lay within me."

"A grandfather and grandson were out walking one early morning, when they came upon a ridge on the mountain. Over the ridge was a large clearing below, where at a distance, they could see two wolves – one black, another white – fighting each other viciously."

"The duo watched as the wolves attacked each other in battle. Both wolves were badly bloodied, but neither was backing down nor giving quarter. The boy looked at them, tearing each other apart alive with their fangs, and felt fear."

"He clutched his grandfather's hand tightly and whispered, "I am scared, Grandfather!"

"Don't be," the grandfather replied quietly, "See it. And remember. For such is our fight too. A fight we are all fighting inside us daily."

The boy looked up intently into his grandfather's eyes and asked, "What do you mean, grandfather?"

The grandfather replied slowly, "Our Life is like this battle of the wolves. Both wolves are inside us. One is good and does no harm. He lives in harmony with all around him and does not take offense when no offense was intended. He will only fight when it is right to do so, and in the right way."

"But the other wolf is full of anger. The littlest thing will set him into a fit of temper. He fights with everyone, all the time, for no reason. He cannot think because his anger and hate are so great. It is hard to live with these two wolves inside us, for both of them try to dominate our spirit."

"Like these wolves, neither wants to back down or give quarter. They are equally strong and equally dominating. The frightening thing is that any of them can win."

His grandson was watching him intently now, his brow creasing with hints of understanding and concern. The grandfather continued...

"When we see people doing good, making sacrifices for the good of others, we know that the good wolf's spirit is strong within their hearts. Each good and honorable deed they do, gives this spirit more power within him. This in turn, empowers the Human Being to be more honorable."

"Similarly, when we see people doing evil, people full of anger, greed, envy, ego and hatred, we know that the bad wolf within them is strong. Each bad and dishonorable deed they do, gives the bad wolf more power over them, until it has won, and has utterly consumed them."

The boy pondered on his grandfather's words as he continued to watch the wolves battling fiercely below.

"But grandfather," said the boy, "Which wolf will win within me?"

"Ahh," the grandfather replied solemnly, "The one you choose to feed".

"But can I really tame these great spirits within me?" Josh wondered aloud.

"Wolves were wild," Rosh answered, "yet we domesticated the dog. Domesticated dogs are descendants of wolves. Dog has become man's best friend today."