Is A Goat A Goat? 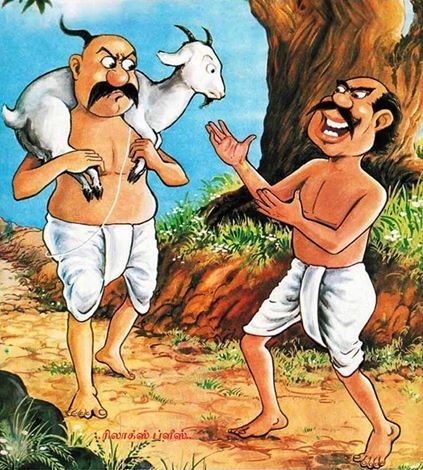 “Did you know that the world seeks truth,” Rosh was saying animatedly as father and son trekked their daily trek, "yet it seldom achieves it."

"This is because it does not recognize truth in the first place. Our ignorance is exacerbated because we seek confirmation when we do find truth somewhere."

"Now there is nothing wrong in putting your faith in something after it is tested or verified, but how can the blind lead the blind?"

“When I was a kid, I read an interesting story from the Panchtantra. A Brahmin received the gift of a goat from his patron."

"In those times, Brahmins were like the priests we have today in the western society."

"Mighty pleased with his reward and anxious to reach home quickly as it had started raining, he carried the goat home on his shoulders."

"Four rouges saw him walking towards them with his goat and hatched a quick plan to confiscate it.”

"Disguising himself, the first of the rogues approached him and asked, “Where are you going with that donkey on your back?”

“Does this look like a donkey to you?” retorted the Brahmin mockingly, “I’ve been gifted a goat for my services.”

“Oh, ok,” said the rogue looking quite surprised and walked away.

The Brahmin continued on his path. After a while, he spotted another man resting under a tree.

“Why, you must be tired carrying that fat ass pup on your back,” this man remarked.

The Brahmin frowned. He turned to look over his shoulder. The animal he carried certainly looked like a goat to him.

“This is a goat,” he asserted, but a slight doubt had crept in his voice, “Can’t you see?”

The second man smirked, “Yeah, some goat. Looks like an ass to me.”

The puzzled Brahmin hurried on his way to home, but he couldn’t help thinking about the two men he had just met on the way. ‘Are they crazy or what?’ he thought, ‘I’m sure this is a goat.’

A couple of miles later, he saw a third man walking towards him. This man began to chuckle as the Brahmin drew closer.

“What’s so funny?” asked the Brahmin.

“Isn’t the ass meant to carry you?” chuckled the man, “Oh, how times have changed?”

The Brahmin was now really perplexed. As he walked distraught towards his home in the pouring rain, he met a fourth man, who burst into laughter on seeing the hurrying Brahmin. The irritated Brahmin threw down the goat and looked at it in disbelief.

“Is that a donkey?” he asked the man bursting with uncontrolled mirth.

“Yeah. But why were you acting the mule carrying it?” replied the giggling stranger.

The thoroughly embarrassed Brahmin walked away furiously, without a second look at the dumped goat. When he was out of sight, the fourth rogue merrily picked up the goat and walked back to meet his gang.”

“Now Josh, the Brahmin knew he had a goat. Yet his conviction weakened. Not only did he distrust his own eyes, he grew angry at his patron thinking he had fooled him."

"Ridiculed by four strangers and in fear of losing face in front of more, he dumped his prize. Don’t we go about in our lives like this Brahmin too, dumping our goats and doubting ourselves when confirmation is not forthcoming?” sighed Rosh and fell silent.

“Is truth not The Truth until it is confirmed?” thought Josh grappling to reconcile it with the popular affirmation that Truth is an Absolute, as he walked back home with his father.

Next: The Coldest Winter Ever