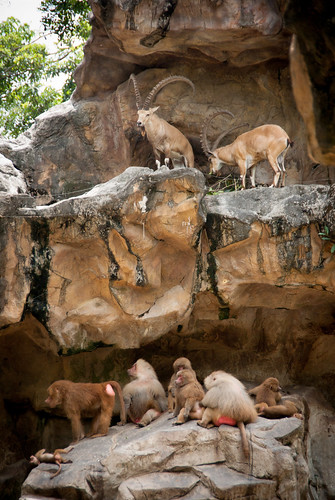 The news was grim. US sharemarkets had fallen again last night.

Other markets around the world were expected to follow suit when they opened today.

"What to do when markets are crashing, Ma?" Josh asked suddenly.

"Remember the story I told you yesterday,” Isha sighed. “About a village getting a visitor one day, who wanted to buy the village monkeys for a silver coin each."

"Yea," Josh nodded, remembering the tale. "Since no one has ever traded in monkeys before, the villagers catch all the monkeys in the neighborhood and happily sell them to him."

"Having bought all the monkeys around there, the buyer goes to the neighboring village. Later, another visitor arrives in the monkey-less village and is happy to pay double for the monkeys."

"But there aren't any more monkeys left around. They were all bought by the first buyer. So, the villagers ask the new buyer to come back next week, and go looking for the first buyer. Track him down. Offer to buy back their monkeys at cost. Buyer refuses to sell without a profit."

"Obviously," Isha continued the fable. "So, the villagers raise the offer price to coin and a half per monkey, but the buyer declines.”

“I don’t know," stumbled Isha, then recovered. "That was the least of their worries though, as the buyer didn’t sell at that price. So, they offered him a coin and three quarters per monkey.”

“Oooh,” Josh giggled. “That’s pretty clever. Three quarters of a coin won’t buy anything either. It is useless. Smokes and mirrors. They'll still be buying the monkeys back at cost.”

“Great usage of that English phrase," Isha laughed. "You really have understood what 'Smokes and Mirrors' means now. But a coin and three-quarters is still worth a lot more than just a coin."

“You don't know, Ma," Josh said authoritatively. "Three-quarters of a coin is worth nothing. The shop keeper didn’t sell me a sweet for a full defaced coin I’d found. He would most definitely give me nothing for a damaged coin.”

“Good point,” Isha had to agree with his irrefutable logic. “The buyer probably figured that out too, so he declined again. But remember, coins are made of metals. Even damaged coins are worth something."

"When you are older and smarter than you are now, you will find wonderful ways to profit, even where others see no opportunity. If you learnt how to use the magic of Math, you could really be rich one day."

"For example," Isha said, "if you bought two monkeys for three coins, wouldn't that be paying a coin and a half for each monkey? Two half coins make a full, and you wouldn't have to break the coin either."

"So if you were really smart, would you decline if someone offered you one and three quarters coin value per monkey."

"How do you mean?" asked Isha.

"Two three quarters, make one and a half," answered Josh. "Add two full coins on top. So, I could sell two monkeys for three and half coins. But half a coin is useless. I wouldn't want that. Likewise, with selling one and three monkeys, I get coins and parts."

"So, only if I sold them in lots of fours, would I get full coins ... seven to be exact. Paid four, got paid seven. I'll take that deal. But the buyer would have to buy four monkeys from me at a time."

Isha smiled at her precocious child and continued, "Maybe that's why he didn't take their deal. The villagers were horrified though, when in the heat of bidding, one hasty youth amongst them raised the price to two full coins. There was no margin left in it for them now.”

“Yet, their horror turned to shock, when the buyer declined this offer as well. It was clear he was holding out, but for how much? And why?"

"Whoever said you can’t sell a secret, was obviously wrong. He had never heard of whole subdivisions being sold off the plan, or public issues of dot com stocks that never earned a decent coin.”

“Anyway, negotiations had almost petered out without a deal, but the hot shot villager still had adrenalin pumping through him. Like a dog who just won’t let go of the bone, he bid the price higher and higher until the buyer finally relented at three coins.”

“The villagers were gob smacked, but reasoned that city dwellers being pretty astute and more informed than them, must be on to something big, to do with monkeys."

"Otherwise who would buy a useless monkey for a silver coin in the first place, and then not let go of him until three times that price.”

“Not willing to miss the proverbial bandwagon, they jumped on and bought back their monkeys too, for three coins each, before the buyer changed his mind or reset the price higher."

"Like in our original fable, the second buyer never returned next week to the village to buy their monkeys, or ever after. So, they were left holding the babies – I mean monkeys.”

“In Dhirendra Kumar's version of this parable, in yet another village nearby, another buyer appeared one day. He offered to buy goats for two silver coins apiece."

"Goats are useful domestic animals, you see. So, it would be fair to pay more for them, than what one would pay for the useless monkeys. But no one normally paid that much for them those days. So, the villagers happily sold all their goats to this buyer.”

“Then, they had a similar experience. A second buyer appeared soon after, offering them three coins for any goats. The first buyer refused to sell back without a profit, and eventually the villagers ended up buying back their goats for four coins each.”

“Yet again, the two buyers disappeared after the transaction, and no one ever came and offered so much money for a goat again."

"But there was a difference. Goats weren't monkeys. They could be milked every day, and when the milk stopped, they could be killed for their mutton.”

“Dhirendra writes that it wasn't such a disaster for the goat buyers. The monkeys ate too much, shouted and shrieked all day, and sometimes bit their masters and their kids."

"Eventually, when it became clear that the monkeys were worthless, their owners abandoned them and tried to forget about their losses.”

"If you are going to act a goat and pay absurd prices, betting on a greater fool coming along later, to relieve you of your burden, make sure you buy a goat and not a monkey.”

Next TaleTown Story: The New Healthy