How To Create Music? 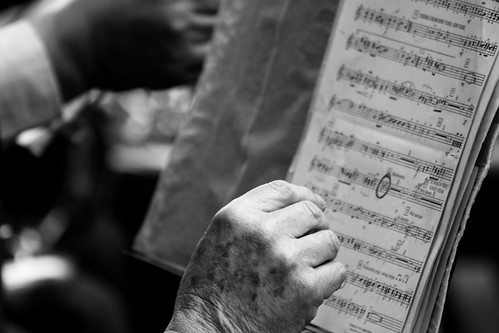 Previous Story: The Sound Of Music

"But how can good music be created, Pa?" asked Josh.

"The 20th-century western composer John Cage defined music as 'no noise, only sound'. Osho would probably have disagreed."

"Sound in and of itself isn't music, but we do conceptualize music in sound."

"Osho would probably have said that when the Soul overflows with love, what flows forth is Music."

"What is Music to one can be noise to the other, because we are all different."

"Yet, difference can be beautiful when it exists like various flowers co-exist in a garden. Difference is fulfilling when it helps us complement each other."

"While technology has helped engineer musicians, and harnessed the ability to play music at the touch of a button, music that touches - still happens. I believe it cannot be created."

"It comes when the conditions are ripe, the instruments tuned, the conscious conduit receptive. Then flows out the Opera, the Ballad, the Azaan, the Ghazal or the Bhajan. Music that is immortal. Music that leaves a lasting imprint on human psyche."

"The Mughal Emperor Akbar once asked Tansen, the music Maestro of his time and one of the nine gems (Navratn) at Akbar's court, as to why he couldn't play as well as his own Guru."

"This living legend, whose musical prowess reportedly smashed glass and extinguished burning candles, is said to have replied, "But I can never be as good as him. I play because I want something. He plays because he's got something."

"Ethereal music flows from a blooming personality. It is the sound of Life, of Being."

"But we live in a world that values Becoming over Being. If you must create, create that inner silence that metamorphoses naturally into music. Create that deserving conduit, through which the Anaahat can express its Naad."

Josh nodded silently and walked out of his father's room.

"What is Anaahat Naad?" Josh asked his brother later that evening, "Have you ever heard it yourself?"

"Did Pa tell you about it?" Hosh looked up from his books at his brother. Josh nodded.

"What did he tell you?" Hosh asked.

"Nothing," answered Josh, "He just told me to create Anaahat Naad if I wanted to create good Music. I didn't know how to do that, and I didn't want to go back and ask him either. So, I tried reading about it myself on the Internet."

"And what did you find?" Hosh enquired, his curiosity suddenly piqued.

"I read that it is an internal sound within the body, signifying spiritual growth, especially associated with the awakening of Kundalini. Now I don't know what or where Kundalini is? And I don't know absolutely anything about what to do to awaken it?"

"Be a bit careful," smiled Hosh, "with who or what you read on the Internet. There is a lot of crap on the web. People present their perceptions, as if they were gospel. And half the time they aren't even aware themselves, that they are doing so."

"Anyway," he continued, "I don't know much about awakening Kundalini. I think it is a Yogic process of enlightenment through meditation on Chakras in our body. But I don't think Pa wanted you to go down that track if you just wanted to create Music."

"Anaahat Naad or 'unstruck sound' is an Hindu philosophical concept that signifies primordial sound. Vedic thought says that it is the 'uncreated sound' or the sound of silence."

"So, you can't really create it, like you can create music or noise. It is believed to flow out from you when you are ready. You may feel it, if you were a mutant, a mystic like Kabir, or an ancient Rishi who experienced only the sounds that came from nature around him."

"But for the normal contemporary human being, experiencing the sound of silence is almost unachievable. We all crave silence, but can we really stand it? The longest anyone could bear to stay in the Earth's quietest place was 45 minutes."

"Exposure to absolute silence, the kind Anaahat Naad needs to happen, the kind that ancient Rishis espoused, can make you go crazy today, or at least make you hallucinate, scientists at Orfield Labs in Minneapolis have found."

"These scientists were studying how subjects react in their anechoic chamber. Anechoic means there is no echo, as the room is designed in such a way that it absorbs sound. Since sound doesn't bounce off its walls the way it does in a regular room, it is also known as the world's quietest room."

"The sound level in the anechoic chamber is -9 decibels, a Guinness World Record for the quietest place, compared to the average 'quiet' room's 30 decibels. So, if people can't even tolerate silence for any reasonable length of time, what hope have they got of ever hearing the sound of silence?"

"Can silence really have any sound? It seems like an oxymoron, a figure of speech, like saying 'deafening silence'. Did Rishis really hear it or did they mistake it for something else? You see, scientists discovered an amazing thing in the anechoic chamber."

"Even when there is no sound around us, our ears will hear! As our ears make their own noise!!"

"So, if he hadn't meant it literally," Hosh puzzled over what his father had said to his brother, "then what was Pa trying to tell you?"

"I don't know," said Josh with utter conviction, finally relieved to have confessed it.

"Well," Hosh looked at his brother quietly, then continued, "We still haven't told you how to create music. Actually, creating music is the easy part. You can do it with virtually anything that creates sound. Creating good music though, is an entirely different matter."

"What?" Josh was stumped, "Can you create music out of rubbish bags then?"

"You sure can," answered Hosh, "That's elementary!"

Next Story: The Science Of Sound

Photo source: Beto Vilaboim. Thanks for the photo Beto.