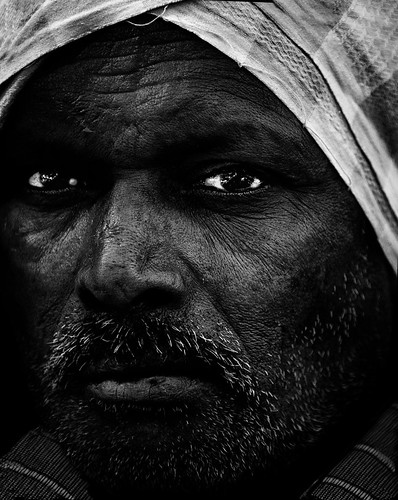 Another bandit marks Alibaba’s house but Marjina is vigilant.

The second bandit found Mustafa's stall easily in the dark hours before daybreak. He quickly struck up a conversation.

"Durood!" he said matter-of-factly. "Are you the master cobbler who claims he recently stitched up a dead body in the dark, blindfolded?"

"I am," Mustafa responded, "although that feat's not exactly public knowledge."

"I didn't say it was public knowledge," he agreed. "You told someone, who told me. He claims you even led him to the house where you did it. Blindfolded."

"What business is it of yours?" Mustafa asked.

"I don't believe any of it," the robber said. "No properly blindfolded man can accurately find his way back from anywhere. Especially while it is still as dark as it is right now. If it is all really true, prove it by taking me there right now, after you have been properly blindfolded."

"Why should I?" Mustafa retorted. "I don't have to prove anything to you."

"That you don't," he agreed amiably, placing an Asharfi on Mustafa's palm. "But I am happy to pay to see if it can really be done. I can make it worth your while to prove it to me."

"We don't have to go back to the same house to prove that," Mustafa said, as he pocketed the Asharfi and stood up for the test.

"But I want you to," the robber asserted and placed another Asharfi on Mustafa's palm.

Mustafa looked at the second Asharfi for a long time. Then, with a nonchalant shrug of his shoulders, he pocketed it too.

"Your business," he said, "is no business of mine."

He walked out of his shop to stand again at the place where Marjina had tied the kerchief around his eyes.

The thief blindfolded Mustafa, and was led through the same convoluted route to Alibaba's door.

He noted the work of his predecessor, and speculated on how and why he had been foiled. Perhaps the neighborhood kids had been playing with white chalk, liked his mark and had replicated it on their own doors.

He marked another unique sign with red chalk on the jamb in a place where he thought it would not be easily seen or accidentally get wiped, and walked away with Mustafa.

Arriving back at Mustafa's stall, he quickly paid Mustafa another Asharfi, thanked and praised him for his magical skills and hurried back to his rendezvous with the others.

Marjina had not told anyone about the white chalk sign, so it bothered her more. She had now been thoroughly inspecting the house exterior regularly, to gauge if the white mark had been a one-off event or was a part of something more sinister.

Her heart jumped when she discovered the new hidden red sign on her door jamb.

'I'm positive it wasn't there earlier,' she thought, 'but perhaps I'd missed it. I still need more than this to disturb the master.'

Nevertheless, she chalked the doors of all her neighbours again in a like manner. Her heart was filled with foreboding that someone had identified their house. So she decided to increase her vigil and really be on guard for anything out of the ordinary.

The robbers went to town again as planned. But when the Captain sent one of his men with the second robber as an advance party, they found that they had been thwarted again.

Fuming silently, as the risk of their discovery and capture increased exponentially every time they entered civilization en masse, they returned empty handed.

All hell broke loose when they finally gathered back at the cave den.

"Khaak bar sar-et," they howled at their failed brother. "You should die!"

"Khaak bar sar-am," the shamed man agreed. "I should die!"

He cut his own throat.

'Can't afford more delays or another failure,' their Captain pondered. 'I must do this myself. If these birds learn we are onto them, as they might already suspect by now, they may fly away.'

"You need to die yourself," he sighed, "to get to Jannat."

"Paradise," answered Rosh. "It is the opposite of Dozakh, or Hell."

"How can you get anywhere," asked Josh, "when you are already dead?"

"The life within you manages to stick to the physicality of who you are," Rosh answered. "That is why you perceive yourselves only as your body. Your body is not you, it is what you have gathered here."

"Death is the name for the end of this life. But in many cultures and religions, it is not considered as your end. It is simply an end of your body. Your soul journeys on."

"Death of this body is just the beginning of another journey for the soul within this body. Like you changing trains at the train station."

"The train stops at the station, but your journey continues. This body stops functioning at death, but the Soul within it, carries on. Where does it go?"

"Many cultures and religions believe that it takes another train, another body - until it reaches its final destination."

"Sometimes, it also temporarily stops at stations called Heaven and Hell. People believe that these stations do not exist on this Earth. They are somewhere out there. And the Soul reaches there after the death of this body."