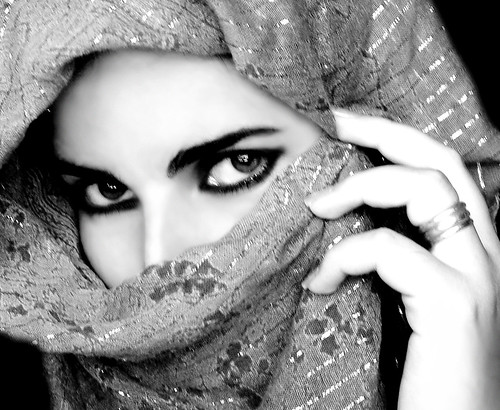 Marjina convinces the Haqeem that Qasim is very sick & then Mustafa to go blindfolded to sew the corpse.

Ali Baba left her weeping, and went to discuss with Marjina how to manage the burial of his brother.

After much consultation, he left the slave-girl and departed home to speak to his wife.

Then, Marjina went to the medicine dispensary, and requested daru from the druggist.

"Daru?" Josh's ears pricked. "Why did she want alcohol?"

"Similarly in Hindi, we say 'dava daru karo' when we are telling someone to get medical help."

When Josh nodded and did not seek further clarification, Rosh continued with his retelling of the Arabian Nights tale:

"Who is ill?" the physician asked Marjina.

"Master Qasim," she responded. "Been sick for days. Not eating, not sleeping, working himself to death. It's finally caught up with him, I'm afraid."

"The Hakeem questioned her thoroughly on Qasim's condition before an appropriate medicine could be given. But Marjina was a clever girl. She accurately described symptoms of a critically fatal sickness she knew of."

"While returning home with the Haqeem's medicine, she also briefly stopped to gossip with all and any acquaintances and neighbors about her master's dreadful illness."

"Meanwhile, Ali Baba discussed the situation with his wife while they dug and buried their latest installment of loot. She understood their predicament and consented to his plan of action."

"Throughout the rest of the day, they made a point of being seen, passing back and forth between Qasim's house and their own, and speaking to as many of their neighbors and acquaintances as they could, about Qasim being severely ill."

"In the evening, Marjina went to the Haqeem again. She asked for the strongest dose of a medicine that could pull back a man from the brink of death."

"Is he that bad now?" the druggist inquired, as he handed her his strongest dose.

Tears filled her eyes as she responded, "Much worse! Medicine appears to have done him no good. I'm afraid, he might have left it too late. It might be all over for him before he sees another day."

"No one was therefore surprised, when wailing and cries were heard from Qasim's house late that evening. News spread quickly in the neighborhood that Qasim was dead."

"Long before dawn the next morning, a veiled figure dropped the inner bolt on the outer door of Qasim's house and stepped quietly on the dark pavement outside. She checked left and right. Satisfied that no one was about, she closed the door from outside and walked briskly towards the Bazar."

Hosh sat up in bed, unable to bear the excitement lying down. Josh's head was poking out of the duvet too, watching him intently while the rest of his body lay well hidden under the covers.

Rosh felt at peace. The kind of peace that can only come from contentment one feels when one is with family. He continued with his retelling of the story.

"Now, I'll tell you about Mustafa," he said.

"Mustafa habitually arrived at his shop long before daybreak. He was getting on in his years and rapidly losing sight in both eyes, but that deterred him neither from practicing his trade nor from walking up to his shop in pitch darkness every morning."

"He was a master cobbler, and proud of it. He could still sew up a shoe without looking at it, a feat others found impossible to imitate."

"As he was about to open his stall this morning, a veiled figure carefully stepped out of the shadows and gently called out his name."

"You gave me a fright!" he whimpered. "What do you want?"

"Sorry," Marjina whispered as she gave him a gold mohar, "I didn't mean to scare you. I've been waiting here long. Will you come with me blindfolded, to do an urgent job? You will be very well paid."

"What is the job?" his curiosity was aroused at such a generous fare, despite his sudden apprehensions.

"Something only you can do," she promised him sincerely. "You will be very well paid."

He generally steered clear of intrigues. But personal pride and potential windfall forced him to reconsider today.

"Who are you?" he inquired further. "Why all this secrecy?"

"I can't answer questions that could identify my master," Marjina responded. "Secrecy is paramount. But you will be able to name your price."

"Secrets scare me," he scowled. "I am getting old. I don't like them anymore."

Silently, she placed another gold muhar on his palm, and assured him, "I will lead you, be with you at all times, and bring you back too."

He turned the golden asharfis over and over between his fingers while he stared at her eyes and mulled over his decision.

"Please come," pleaded Marjina. "I beg of you! We need your help."

She quickly tied a handkerchief tightly over his eyes and led him by his stick. She deliberately took a longer route, and went into unnecessary side streets just to double back again and confuse the blindfolded old fox.

The rest of the world was sleeping, blissfully unaware of her stratagems, when they finally reached her master's house. Opening the door silently, she ushered him in and took him to the dark room wherein lay the dead body of her master.

There, she asked him to sew together the pieces of the corpse, as they had been laid out for him.

When Mustafa had done her bidding, she paid him his fees. She then led the old cobbler back to the outer door.

Still veiled, she stepped out of the house and casually looked around.

All was clear. Guiding the blindfolded Mustafa out on the street, she bolted the door from outside and took yet another convoluted route to lead him back to his stall in the Bazaar.

A street dog barked and followed them awhile, but could not rouse anyone in the sleeping town. The cock was ushering in the dawn as she arrived home silently and safely once again.