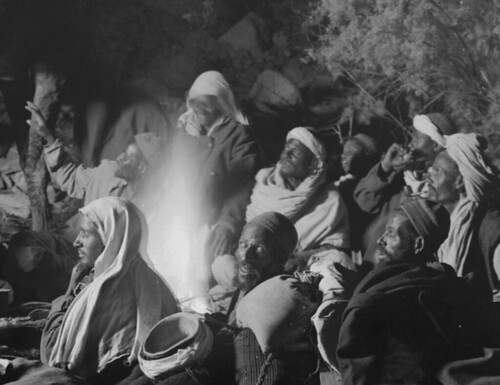 Captain of the thieves identifies Alibaba’s house & returns to hatch a deadly plan.

"Was the Captain preparing to die then?" little Josh asked.

"No," laughed Rosh, "he was using a figure of speech. A Metaphor. It is a manner of speaking. To describe something without literally meaning it."

"He just meant that if you want a job done perfectly, you've got to do it yourself. You can't bank on others to do it so well for you."

"So, he declared to his gang that he'll go himself this time. The din quietened a little, but he could smell blood in the air."

"Now, that's another Metaphor. It means he could feel the tension."

'I'll have to hurry,' the Captain thought.

Accordingly, in the dark hours before next morning, he went along to Mustafa, who obliged again for more Asharfis.

These night visitors of the last few days had paid Mustafa so well, he was richer than he had ever been before in his life.

"He knew the danger, but gold was a great persuader. He also sensed he had no real choice but to play along with these visitors now, and perhaps he might just survive long enough to spend his new-found wealth."

"When they came to Alibaba's house, the Captain made no marks on it. He just looked at it. Very thoroughly. Why do you think he did that?"

"So he could find it again, without actually marking it anywhere?" Josh tried.

"Yeah," Hosh interrupted, "so he could imprint its exact fine details on his memory. And never, ever forget it again."

"Yeah," Rosh agreed, "but also, so no one in Ali Baba's house could suspect, that he now knew where they all lived."

"His work done, he paid Mustafa and went on into the jungle to meet with his gang. A plan had taken shape in his mind, and when he met them, he discussed it in great detail."

"What say you?" he asked, after he had finished telling them his plan.

"Aurey," the bandits roared, shouting their agreement in unison. Their collective cry had a flammable timbre. Passions were running high.

"Yeah," said Rosh and continued the Arabian Nights tale. "The thieves departed in different directions. They had work to do. They worked separately, but when all their required materials had been acquired, they gathered back at the cave."

"Together, they had brought back 19 mules and 38 large airtight wooden barrels, one full of mustard oil and the rest empty."

"They smeared the outsides of all drums with mustard oil. Then they unwound the top round wooden covers of all empty barrels and made tiny holes in them."

"The holes were thin, but so long they passed through the depth of the wooden covers, so air could easily pass through them. Then, they nailed four fist sized blocks of wood on the four corners on the outer side of these round covers just inside the rim."

"This done, they readied themselves. With the cohesion and commitment of a Japanese drum line!"

"Then, armed and accoutred, one-by-one they climbed into an empty barrel each, and one of their comrades rewound the barrel's cover on top of them."

"A round leather cover was finally roped over the barrel top to hide the tiny holes in them, while still providing openings through the lashed sides for airflow."

"The barrels were then loaded up, one each on both sides of every mule. The nineteenth mule had a man in an empty drum on one side which was counterbalanced on the other side by the only drum full of oil."

Their work done, the leader disguised himself as an oil merchant.

As the dusky night rode down the sky, he drove his loaded mules into the darkening town before him and knocked at Ali Baba's house.

Ali Baba had just finished his dinner, and was strolling in his courtyard. He answered the door himself.

"I am an oil trader. Came to your town to trade, but was too late arriving here today. And now I can't find safe and suitable lodgings for myself, my beasts and my merchandise."

"If my oil-filled containers were to be stolen tonight, I'd be completely ruined. Please give us panaah (refuge) for the night."

Although Ali Baba had heard the Captain's voice while perched upon the tree and had seen him enter the cave, he did not recognize him now because of the darkness and his disguise.

"Khosh amadid," he generously welcomed the stranger. "You're welcome in my home."

"Mersi," the trader responded. "Thank you."

"Khahesh mikonam," said Ali Baba graciously, as he stepped aside from the door and waved him in. "You are welcome."

The trader bowed gratefully and led his mules into the courtyard. Ali Baba instructed his slaves to tether the beasts in the far corner of the courtyard and feed and water them.

"Have his barrels stowed in the alcove inside the kitchen," Ali Baba instructed Marjina, "so they are always within sight, yet safely out of everybody's way, especially the beasts. Provide for his needs and make him feel at home."

"As you wish, Lord," Marjina said and bowed.

"Tomorrow," he continued, "I'm off to bathe at the Hammam. I'll take Abdullah with me. Send suitable clothes with him, so I can wear them after my bath. Also prepare some broth tonight, so it's ready for me when I return from the Hammam before dawn."