The Frog Who Climbed The Eiffel Tower 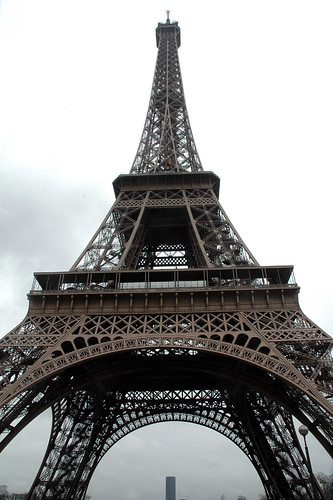 “I'll have science next year,” said Josh, as he started walking with his father. "It is very hard!"

“Everyone in my class,” he answered. “Even the seniors say so.”

“Pay them no attention," said Rosh. "You are going to a new school next year."

"Which isn’t generally much,” Rosh sighed and paused.

“Be different son,” he began again, after yet another sigh. “You don’t want to end up in the same place as everyone else."

"A climbing competition once happened in a community of frogs. Their goal was to climb to the top of France’s Eiffel Tower.”

"A big crowd of animals gathered around the Tower to see this interesting race."

"They had come to cheer on these tiny contestants, even though no one really believed that any tiny frog could ever reach their goal."

"As they milled about on le Champ de Mars, loud discussions raged about the chances of the frogs.”

"No way anyone will get to the top!” said one.

"Yeah, it's just too far for the poor buggers," agreed another.

"The contestant frogs heard all this chatter and began to have serious doubts about having set such a lofty goal. But it was too late to cancel the race now."

"Invitations had been sent. Guests had arrived. The show was on. With great fanfare, the race began.”

“The tiny frogs, though energetic hoppers, were no climbers. One by one, they started falling back to earth. Each time a frog fell back, the crowd 'aahed' and 'oohed' and said things like, 'See! It is too difficult for these tiny creatures! The Tower is just too high for them'!"

“Yet, some frogs kept climbing. Higher and higher. Now, climbing is tiring business, and Eiffel Tower is really, really high. Tiring as they climbed higher, more frogs gave up and fell back.”

“The crowd patted their bruised backs and comforted them, ‘You poor things, you did so well. But you never had a chance'."

“Yeah,” agreed others, "no one has ever made it to the top except the birds. No one else could ever make it."

“The remaining climbers heard these comments. It sapped their energy. Suggestions have great power, you see. One must be very careful with what one allows to take root into one’s mind."

"Encouragement plants strength in the mind. Criticism steals it away. That’s why more positive things happen to people who think positive, and not much usually happens to the rest."

"Doubt weakens our resolve, shatters our dreams, makes us lose before we even begin. So more tiny frogs fell back when they heard such comments."

"As more of them fell back, the crowd grew more confident and asserted even more the hopelessness of their quest. It became a self-feeding loop. And snowballed."

"In the end, only a few frogs remained. The ones who knew the power words have. They stayed cautious and focused on their goal. But as they climbed higher than their ancestors had ever done before, they felt scared."

"Afraid to go up even higher, more fell back."

"The crowd was a little scared too, and you could hear them say, 'Gee, it must be really really scary, up that high'."

"The sun climbed higher and higher in the sky too, and it became very hot. The tiny frogs were sweating now, and their tiny limbs pained.”

"Little drops of sweat fell in their eyes and blinded them. Sweat on their paws made things slippery. It made them lose their grip. The race became even more dangerous. One by one, more frogs fell back."

"Until there was one tiny frog left. He just wouldn’t give up."

"He kept on going until he reached the top and shook hands with the birds waiting to greet the winner at the top of the world."

"They flew him down to the Award Ceremony and to a standing ovation. When the commotion had died down, everyone wanted to know how he had done it. Silence fell, as the crowd waited for him to reveal his secret.”

“What was that love?” the winner croaked pleasantly at the interviewer. “Speak up a bit. I’m a little deaf!”

Rosh turned to look at his son.

“Be deaf, son," he concluded. "Be deaf to other's opinions. Words are powerful. Beware what and who you choose to listen to, for it will affect your actions."

"Be deaf, and daring like this frog when people say that learning science is as challenging as climbing the Eiffel Tower. Think ‘I Can!’ and you will.”