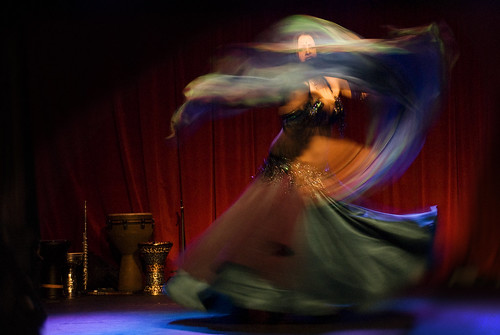 But why didn’t Marjina feel scared?

The night was young, but Marjina knew she was running out of time. She picked up her tempo. Motion fused into sound, creating a visual symphony that gyrated with abandon, bedazzling them.

Ali Baba looked at his nephew. He sat motionless, mesmerized, as Marjina moved closer to him.

'Swish, swish,' her sword moved in the air around him, creating flashes of moving light.

'Swish, swish,' her sword moved around Alibaba, as she hovered over him.

She moved closer to him.

'Swish, swish,' her sword moved around him, as she hovered over Hassan.

Then in one fluid motion before he had time to bat an eyelid, her sword leaped down, and he saw without understanding, how it sliced off his neck from under his very own eyes.

Ali Baba stared in disbelief at Khwaja Hasan's bleeding head. It tilted at an awkward angle from his neck, severed, yet still attached to his torso. Fountains of blood shot out, staining the couch and cushions.

Time stopped momentarily, as his torso slid slowly back on the carpet in slow motion.

Ali Baba's nephew was the first to recover. He jumped up in horror, too late to save Hasan. Then, there was bedlam.

"What have you done?" Ali Baba screamed at Marjina. "You've ruined us!"

"No my lord," she replied calmly. "I have saved you. Have him searched, and see what you will find."

Ali Baba's nephew searched the dead body, and discovered the concealed dagger. Marjina stepped up to the dead man. With trembling hands, she pulled away at his disguise.

Ali Baba gaped at the dead Captain. Blissfully unaware, he had sat beside his death for hours. Seconds ticked by, as he realized how narrowly he had escaped again from certain doom.

His admiration grew for Marjina's shrewdness, courage, and fidelity. It seemed to him that he could neither say nor do enough to thank her. Gratitude welled up in him.

Marjina shivered involuntarily. A tear formed in the corner of her eye, but she said nothing.

"As Allah is my guide," he continued, "and this household is my witness, I fix Marjina's marriage for a mahr (مهر‎; dowry) of a thousand asharfis with my nephew."

"Do you agree?" he asked his nephew.

"Do you agree?" Ali Baba turned to Marjina, and asked her now.

Marjina looked up at Ali Baba's nephew. He was staring back at her like a lost soul. She liked him, but had never thought of him in this light. It had been unthinkable before. It had been another life.

But that life was gone. And this life was just beginning.

This was a new life. A free life. Which held much promise. It was a life in which she could dream. And those dreams could come true. Even though, she hadn't yet learnt to dream.

"Movafegham," she mumbled her consent.

"Do you agree?" he asked again, louder.

"Do you?" he asked her again, one final time. Wanting to be sure.

He nodded and smiled at her compassionately. Then he removed his expensive shawl from around his own shoulders and put it on her. Wiping the blood off her face, he gently kissed her forehead.

"Ezde-va-jetoon mobarak," the shell-shocked others joined in congratulating the couple.

"Oh, she felt afraid all right," answered Rosh, momentarily pausing the Arabian Nights tale to answer his son's question, "but what we do when we feel fear, is what sets up apart from the others. It defines what kind of person we are."

"Fear triggers different reactions in different people at different times, depending on how their brains are wired up. Some primarily fight, some take flight, some freeze, others fawn."

"For example, your Ma yelled at me for pushing her to take her driving test when she wasn't yet feeling ready (fight). Hosh avoided going to party or left early because he felt uncomfortable around girls (flight)."

"I froze and hoped danger doesn't notice me, when sharemarkets crashed in the Global Financial Crisis (GFC). You fawn to your brother when you fear you have upset him too much and that he may not talk to you anymore."

"Our automatic response can change with our situations, but whatever our response is; it helps us cope with danger. In the movie After Earth, Will Smith tells his son the difference between fear and danger."

"Fear is not real," he says. "The only place fear can exist, is in our thoughts of the future. It is a product of our imagination, causing us to fear things that do not at present, and may not ever, exist."

"That is near insanity," he tells his son. "Do not misunderstand me. Danger is very real. But fear is a choice. We are all telling ourselves a story."

"A coward gets scared, and quits. A hero gets scared, but carries on. He feels the fear, but he does it still. Do the thing you fear, said Ralph Waldo Emerson, and the death of fear is certain."

Rosh paused and nodded at his son.

"Courage is resistance to fear, son," he replied quietly. "The mastery of fear, Mark Twain believed, and not the absence of it."

An awkward silence prevailed in the room, as no one spoke. Then Hosh nuzzled into Rosh and whispered softly, "I love you Pa. I'm sorry. I didn't mean to hurt you."