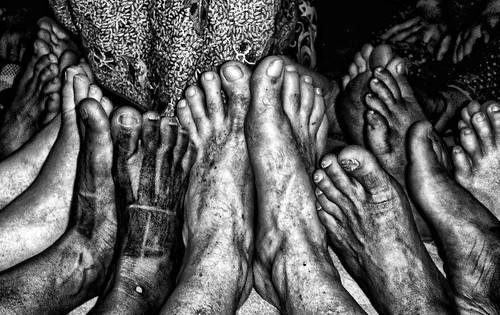 Marjina sat glumly, not knowing what to say. She had done her duty as best she knew. But things could have also gone terribly wrong.

"We all owe our lives to Marjina," Alibaba was concluding. "I shall not forget her bravery and discretion until my last breath."

"As Allah is my guide and this household is my witness, in gratitude for what she has done for us, I now free her from my bondage."

"She is no longer my slave. From this day on, she is a free woman."

"But I hope she continues to stay with us, as the bandit and his mates are still at large. Together, we are much safer but we must remain on our guard."

"Thank you, Lord," Marjina was overwhelmed by his magnanimity. "I will stay. I know I will be safe and well looked after here. But I daresay that after losing 37 of his men in one night, he won't have the courage to return here soon."

Ali Baba considered her confident prediction carefully. It was more hopeful than it was logical. But he kept his reservations to himself. His household had suffered enough trauma for one day, and there was still a lot of work to be done. Their day was only just beginning.

He smiled at her and nodded, thankful for her optimism and thoughtfulness in trying to restore confidence amongst the flock. Panicking wouldn't help them, he knew.

But then, neither would neglect. For he also suspected deeply, that the men he was up against would not rest until they were dead. Or until they had annihilated him and his household.

"What should be done now?" he mused aloud, wondering how to manage their immediate mess.

"We must bury these corpses quickly, and quietly," Marjina proposed pragmatically. "Soon, they will start to rot so much, that the neighbours will begin to notice their smell."

"Yea," agreed Ali Baba. "No good will come out of making these deaths public. Which means we can neither hire labor to dig pits for these corpses, nor load them onto beasts and take them away for burials."

"Bury them here in our own courtyard," suggested Qasim's ex-wife. "And let none of us ever speak of these deaths outside this house."

"This means we can't even summon the Imam from the mosque," added Ali Baba's first wife, "to say the final prayers for these men."

"We'll do the best we can under the circumstances," said Ali Baba. "Allah sees all. Now, this is what we'll need to do..."

He delegated jobs and outlined what he wanted everyone to do. Marjina was sent away to sleep and rest. Then, he took turns with his men in the back-breaking task of digging a deep and wide pit in the courtyard, large enough to take up 37 bodies.

Women rolled out the Trojan barrels still sitting in the kitchen alcove, dragged the dead bodies out of them, and stripped them of their clothes and weapons. The weapons were cleaned and temporarily stored in a room beside the kitchen.

A fire was lit in the kitchen fireplace and the soiled clothes were burnt in it one by one. Water was heated up in a big cauldron on this fire and used to bathe the corpses (Gusl) and clean the fluid discharges from their skins.

Washed bodies were covered with plain clean sheets as shrouds (kafan) and laid beside each other in another room. Once all the corpses were ready for burial, the door was shut on them to prevent the flies from getting at their open disintegrating vitals.

Kitchen floor and walls, all utensils, as well as the 38 oil barrels were thoroughly washed in warm water and cleansed. Then one by one, the females bathed to clean themselves and set about preparing food.

By the time lunch was cooked, the sun had become too hot to be working outside in the uncovered courtyard. Heat sapped the energy of the tired men. Taking turns, they bathed, were served their meals and then returned to their digging shifts.

After doing the dishes and the multitude of other little things that needed doing, the women temporarily relieved the men in digging. Then they went back to their chores and set about cooking dinner.

Despite the short respites in the long-hard slog, it took the household the rest of the day to dig the massive grave. When it was eventually done, the bodies were carried out of the room in the dying light of the day, and lowered into the mass grave.

"Laa ilaah illallah (There is no god but God)," intoned Ali Baba gravely, pouring the first handful of dirt into the open grave. "Muhammad ur Rasulallah (Mohammad is his prophet)."

"La ilaha illallah, muhammadur rasulullah," responded the others, also pouring their first handfuls of dirt into the open grave.

"Allaho akbar," whispered the others sombrely.

As darkness descended in the courtyard from behind the palm trees, the final prayers were said and the robbers were buried. The pit was closed and the ground levelled as much as it could be levelled.

The room, where the corpses had lain during the day, was thoroughly washed with hot water. The household bathed again one by one, and went to bed after having their dinner. Marjina was also awakened, bathed, fed and sent to bed again.

Over the next few days, Ali Baba sent the mules with his slaves to the neighbouring bazaars in ones and twos, and sold them all. Chores gave no one the time or opportunity to sit and dwell idly on the recent events. Routine restored normalcy. For the time being!

Rosh paused his retelling of the Arabian Nights tale, and leaned back in the bed. Josh and Hosh lay on either side of him, and Isha was reclining opposite. All had been listening attentively.