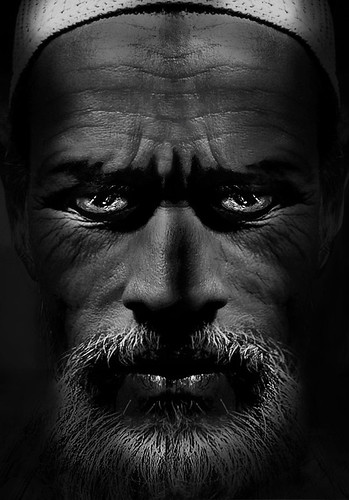 Alibaba went to the Hammam completely unaware of the silent executioner working stealthily in his house.

The family gathered around Rosh again, the next evening, eagerly waiting to hear what would happen next in the Arabian Nights tale he was retelling.

Rosh smiled at them, and started speaking:

Long after the midnight hour, but hours before dawn, all was dark and silent in Ali Baba's house.

A tall dark figure emerged from the guest quarters. He carried a dimly lit lamp and moved stealthily across the courtyard towards the kitchen.

"It's time!" he hissed at the oil-barrels sitting in the alcove, even before he had reached them. The whisper was low-pitched, yet urgent.

He peered closely at the barrels in the really dim light of his lamp. Then, he suddenly stopped.

The leather strapping over the barrel cover was missing. 'How? When? Who?,' his mind screamed. A thousand fears raced through him in a flash.

He peered in the dim light at the other nearby barrels. Their leather strapping was gone too.

Then he smelt it, and he knew. It was the smell. The smell of death. Of urine, and blood and rotting flesh. A smell he knew so well. But he had to be sure. There was no other way.

With fingers trembling with mad rage and confusion, he unwound the top cover on the first wooden barrel. A pair of unseeing eyes stared back at him from its dark womb.

He stepped to the next barrel and unwound its top. What had once been a proud fearless man, was melting to pieces within.

There was nothing he could do. For any of them. His friends were disintegrating in the shadows, blissfully ignorant of their own demise. The ones who were still alive, would be dead by dawn.

He turned and ran. Out of the kitchen, and into the courtyard. In one leap, he was over the wall of the house and out into the dark street.

He ran, and ran, and ran. Out of the city, and deep into the forest. He ran, until he stumbled and fell. It was then that the magnitude of his loss and of his total failure finally hit him.

"Yallah!" he cursed. "What evil is this? And why have you spared me? To live with this shame?"

Rosh looked around the room. Everyone was listening attentively. No one spoke. He continued:

Two hours before the day dawned on the city, Abdullah awoke. He carefully picked up a lamp and his master's clean clothes, went to Alibaba's door and knocked softly.

Ali Baba came awake instantly. He rose from his bed and stretched. He came out of his room, and closed the door quietly behind him. Abdullah was waiting patiently outside his door.

With Abdullah following in his wake, he opened the front door and stepped out into the dark street. They walked quietly to the Hammam, completely unaware of the executioner who worked silently behind them in their house, slowly squeezing the remaining life out of their uninvited guests.

Ali Baba had his bath. With Abdullah again in tow, he returned home before dawn. The mules tethered in the courtyard seemed a bit restless, but he did not dwell on his observation.

The household was still asleep. Ali Baba felt hungry after his bath and walk. He walked to the kitchen with Abdullah, wanting to be served his broth. Then the smell hit him.

He spotted the open oil-barrels as soon as he entered the kitchen, with their oily wooden lids strewn all around. With a sudden premonition, he walked over to the alcove and peered into the closest open barrel.

A scalded corpse stared back at him from within. He faltered, almost fainting with fear and shock. Then, there was pandemonium.

The sun was peeking above the horizon by the time the household's nerves had finally settled. Marjina had been revived from her stupor by Abdullah, but had to be carried to be presented before Ali Baba.

She was lethargic and needed support, but with time and broth, she recovered enough to narrate her incredible nightly adventure with at least some clarity. Ali Baba questioned her thoroughly, and made her tell him everything again slowly from start to end, many times.

"Alhamdulillah!" he said finally. "God protects us! It is clear that the man who took refuge in my home last night, was the Chief of thieves. It is clear that he brought his men here, to murder us and to plunder our house."

"It was probably these bandits who repeatedly marked our house with chalk earlier. When Marjina marked our neighbours' houses similarly, it may have confused them and delayed their morbid plans."

"I forgive her for not telling me all of this earlier, as I understand her reason for not doing so. False alarms should not be raised. Fearing every encroaching shadow makes living impossible. The chalk marks could well have been graffiti by kids."

"Allah helps those, who help themselves. Marjina has singlehandedly accounted for these 37, and I salute her for her daring and wisdom. But from now on, I need to be told anything that any of you think is out of place."