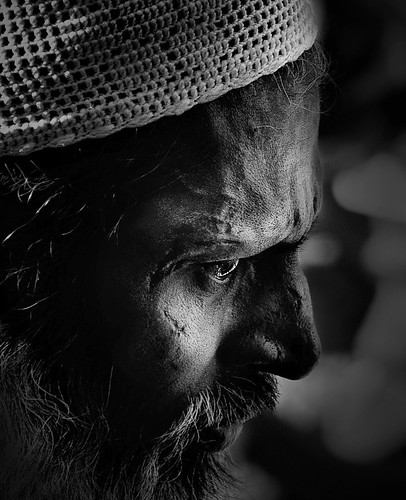 The blindfolded Mustafa leads the thief to Alibaba's house.

The home is marked, but Marjina foils the ID.

"I can't tell you where I did it," Mustafa retorted at the affront. "But blindfold me again and lead me as I tell you to lead me. I can take you there if you pay me."

The thief chewed on this proposition for a few moments, excited at the possibilities yet skeptical of the old man's vanity.

‘Could he really lead them back to the right house blindfolded,’ he wondered, ‘when he had gone there just once, months ago, and been led back using another route?’

'No harm in trying,' he thought. 'What have I got to lose? This old man is full of surprises, and it’s still hours before daybreak. I will easily know if he's lying.'

He finally nodded and slipped another golden ducat into Mustafa's palm.

The old cobbler left his shop open, walked out and stood at the spot where Marjina had tied the kerchief around his eyes.

The thief blindfolded Mustafa, and was led into the same convoluted route Marjina had taken.

The thief marveled at the slave-girl's machinations, as he saw how she had turned into unnecessary side streets and doubled back to confuse the wily old fox.

He marveled more at Mustafa's sure-footedness as he walked on, counting step by step.

But the proof of the pudding lay in its eating. After having taken such a convoluted route, if the blindfolded old cobbler could bring them back to his stall after identifying any house, the thief felt reasonably sure that Mustafa would have successfully defeated her intrigues to hide the job location.

He marveled at the old man's intellect and sharp senses, but held his tongue lest the old man failed or had been lying.

It didn't seem like Mustafa was concocting a show for his benefit out of greed, but then it was Mustafa's town. He had grown up in it, and probably used these streets since childhood.

'Let's see what happens,' he thought, barely able to hold his bubbling enthusiasm in check, despite years of practice and vocational requirement.

He was jolted out of his reverie, when the blindfolded Mustafa halted suddenly, calmly pointed at a house and said, "This is it. This is where I came with her."

Mustafa had stopped in front of Qasim's house, where his brother Alibaba now lived with his extended family.

The bandit took a white chalk and made a special mark on one end of the door, so he might readily identify this house in the future. Then they walked on in the dark.

The blindfolded Mustafa led the thief back towards his stall on the second leg of his journey using the alternative route Marjina had followed. To the robber's amazement, Mustafa arrived at his shop without once faltering en-route.

"Believe me now?" he mocked him, removing the blindfold from his eyes and returning the thief's kerchief.

Marveling at what he had just witnessed, the thief bowed in open admiration and awe at Mustafa's unique skills. He quietly placed another Asharfi on Mustafa's wrinkled palm. Then he hastened back to his rendezvous with the other thieves.

Shortly after they had gone, Marjina emerged from her house on some errand and saw the strange white mark on her door.

She puzzled over it awhile, and suspecting it might mean mischief, she chalked the doors of all her neighbours in like manner. However, she kept her misgivings to herself, not wanting to stir up a storm in a teacup and unnecessarily disturb her master or mistresses.

Meanwhile, the bandit returned and told his comrades his tale of adventure and how he had found the clue. The Captain and his men arranged a rendezvous in the town and dispersed, entering the town at different times in singles and twos using different routes.

The man who had placed the mark on Ali Baba's door accompanied his leader to point out the house. He took him to the place straightway and showing his sign on the door, exclaimed, "This is it!"

But when the Captain looked around him, he saw that all the houses around them bore similar chalk-marks.

"How can you be so sure," he asked, "when the whole neighborhood has the same sign on their doors?"

Noticing his mark now on so many different houses, the guide was suddenly baffled and became unsure of the house he had himself marked in the first place. They returned to their rendezvous and the Captain told his men to disperse and reassemble at the cave den.

Back at the cave, the men were furious.

"Was this a joke?" they roared. "We labored in vain. How clumsy can you be? Inept! Showing us a sabz bagh!"

"It's Persian slang for being led up a garden path," Rosh explained. "For deceiving them, giving them wrong information, wasting their time. They risked so much by going there, you see. But they achieved so little. So they were mad at him."

"Khaak bar sar-et," they hissed at their failed brother. "You should die!"

"Khaak bar sar-am," the shamed man agreed. "I should die!"

They cut his throat.

Hurried plans were then made, and a more responsible and thorough man was sent to do this job properly.

Josh was staring at Rosh, incredulous at what he had just heard. 'How could they kill their brother for something like this?' he thought. Rosh noticed his silent look and understood his disbelief.

"People are different," he tried to explain. "They have different values, think differently. And they can do surprising things. It's best not to judge, or at least, not to judge too quickly."

"For you see, whatever is worth doing, is worth doing properly. The thieves thought the job had been botched because of their brother's mistake. Mistakes can be costly. In the world they lived in, mistakes could be fatal."