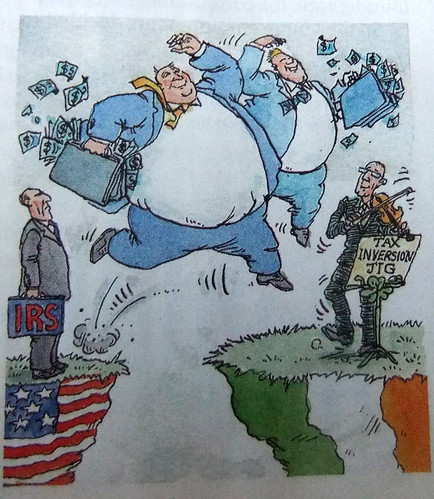 “Is that how much the rich are taxed in USA?” Isha was curious.

“Yea,” Rosh laughed, sensing where she might be headed now, “those figures may have been for around 1999, because Don’s story first appeared in 2001. But where can rich Americans go now to dine?”

“Post 2008 Global Financial Crisis (GFC), the European Union (EU) was considering taxing the rich more, like the rest of the world.”

“With legislations like the 2010 Foreign Account Tax Compliance Act (FATCA), Americans were sniffing their rich out all over the world. So, not many safe foreign diners left for them to go, I guess.”

“Anyway, whenever economies falter, desperate or ignorant politicians promote “tax the rich” schemes, although the rich already pay a disproportionate share of taxes.”

“This leads to more tax avoidance and tax evasion, which results in the rich actually paying less tax than they should.”

“How can you conclude that?” Isha was belligerent, “Anyway, they also earn a disproportionate share of national incomes, so they can afford to pay more.”

“The information is freely available,” Rosh laughed, “Just look it up. Even in New Zealand (NZ), IRD collected millions in extra tax since a unit was set up in 2003 to investigate high-wealth Kiwis. So much for being rated amongst the top three honest countries globally on the CPI for years.”

“No,” Hosh answered, “Pa is talking about the Corruption Perceptions Index (CPI). It has consistently shown New Zealand as a country with low levels of corruption in its public sector.”

“Since its inception, New Zealand has always scored in the 98th percentile, with a score of 90 in 2012, and ranks either at the top or within the top three countries in the world.”

“That’s not an apples with apples comparison,” Isha objected, “CPI focuses on corruption of public officials and government entities, not corruption amongst rich individuals.”

“A purist argument,” Rosh dismissed the objection, “What makes you think Kiwi politicians and government officials are a different breed of people than rich Kiwis?”

“What would 10 Americans be paying for their dinner today, Pa?” Josh brought them back on track.

“I don’t know,” smiled Rosh, “The data in that parable is probably a decade old now, even if it was factually correct then. But if one is interested, it is easy to reconstruct the story based on current numbers from US Inland Revenue Service (IRS) again.”

“According to Monty Guild, the top 1% American earners had paid 38% of total federal individual income taxes in 2008. The top 5% US earners paid over 58% of the total US taxes that year.”

“Interestingly, that same year about 52 million American filers paid NO federal income tax and many millions more did not even file a tax return.”

Rosh paused. There was pin-drop silence in the room. They waited for him to continue.

“More interesting than the numbers in the data,” he obliged, “is what those numbers are trying to tell us. If you observe them carefully, you can begin to understand how the (US) tax system works.”

“The first four men in the parable - the poorest - paid nothing. This means, 40% of Americans together paid less than 1% of national income tax that year. The numbers today won’t be too different, I think.”

“The tenth man - the richest –paid $59. What it really means is that around year 2000, the wealthiest 10% in America paid 59% of all income taxes collected by the Federal Government.”

“Almost a decade later, wealthy Americans were earning about 50% of all income but paying nearly 70% of the federal taxes, according to an analysis by CBO - the Congressional Budget Office (CBO).”

“That can also mean that the rich got richer and the poor got poorer,” argued Isha.

“It can mean that too,” Rosh agreed, “But also likely is that the rich ended up paying more tax than they were paying earlier, once the top tax rate was lowered.”

“It appears tax cuts essentially ended up costing him more, instead of being a saving for him.”

“Even mathematically, tax cuts are not fair to the rich, just like they don’t benefit the poor much. They are skewed in favor of the middle class – the majority.”

“Perhaps the restaurant owners all over the world are afraid of being beaten up by the five men in the middle. Historically, it has been the working class that has usually caused all the trouble.”

“The fifth man,” said Rosh, “like the first four, now paid nothing after the discount, or tax cut. For him the dollar saved was a 100% saving of his food bill.”

“The eighth paid $9 instead of $12. A 25% saving. Catch my drift? Savings are getting lower proportionately, the richer you get.”

“The ninth paid $14 instead of $18. Saving only 22%. So the system apparently shortchanged the richer folk again.”

“How ironical then, that the guy who paid the greatest share of tax and made the smallest proportion of saving on tax cuts was the one who got blamed and lynched by the mob!”

“That is what the rich get. Yet people aspire to be rich. It is the American dream, isn’t it?”

Next: There's No Free Lunches