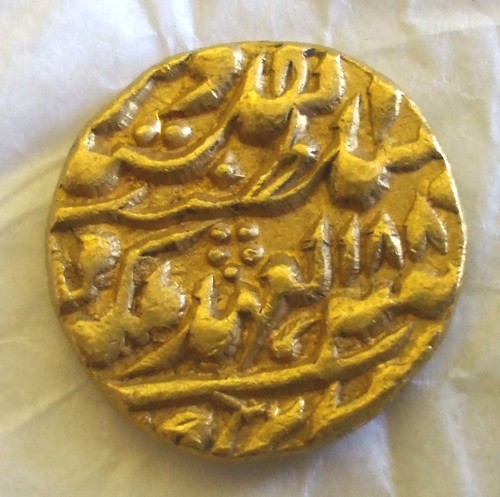 With slave-girl Marjina, Alibaba plans full Islamic burial rites for Qasim, but how to avoid suspicion?

Morning came, but Qasim did not return. Ali Baba set out for the hidden cave with his three asses.

He was full of foreboding, and his unease increased as he neared the rockface.

"Baaz kon Simsim," he invoked fearfully, not really wanting to go in.

Reluctantly, he pushed his mules before him and entered.

Bile rose in his mouth as he sighted the quartered parts of his brother's body hanging inside the cave entrance.

Shaking involuntarily, he untied the body parts, wrapped them in two cloths and laid them upon one of his asses.

Although he was terribly afraid, and wanted to flee, he tied up and placed more sacks of gold coins upon the two other animals.

Safely out of the robbers' den, he chanted the cryptic password and Simsim closed behind him. He hid his animals' loads carefully by piling sticks and brushwood on top, and hurried back home.

Handing over the gold coin loaded mules to his wife, he asked her to bury the treasure. He did not tell her that he had found Qasim.

All he wanted now, was for Qasim to be buried, without anyone knowing that he had not died a natural death. Leading the ass loaded with his brother's corpse, he walked to Qasim's house and gently knocked at the door.

The slave-girl, Marjina, undid the bolt and admitted them into the courtyard of the house. Looking at her, an idea began to take shape in his mind. He knew she was trustworthy, quick-witted and astute. Taking her aside, he confided in her.

"But first, we must secretly prepare your master's body for the burial rites," he concluded. She understood and nodded silently.

Together, they unloaded Qasim's body from the beast's back and took it inside the house. Then Alibaba went in to see Qasim's widow. He knocked softly on her door and called out her name.

She opened the door with hurried anticipation, a multitude of unasked questions waiting to fly from the tip of her tongue. But one look at him killed all hope in her.

Fear choked her throat and tears flew from her eyes again. He could see that she had been crying all night. Slowly, he took her hands in his own. And led her to the room where her husband's fetid body lay in pieces.

The flesh had already begun to rot, and a deathly smell pervaded the room. She was horrified.

Wave after wave of nausea shook her body and weakened her legs. She sunk on the ground and wept wordlessly.

Ali Baba stood silently in the room, witnessing her sorrow. Grief overpowered him, but a lot needed doing. His sense of duty cleansed him of fear.

When the tempest inside her had subsided, he recounted to her how and where he had found what remained of his brother, and what they must do now.

"What has been done, has been done," Ali Baba concluded. "It can't be undone. But we are all in great danger now. When the thieves return to their den and find the body gone, they will know that that their secrets are secret no more."

"They will not rest until they find who is responsible. Qasim must be buried without anyone knowing that he did not die a natural death. Our lives depend upon our secrecy."

She nodded in silent understanding and promised to keep the affair concealed. But Ali Baba hadn't finished.

"When your Iddah is over," he continued, " I will take you as wife, as is customary. Since you are already wealthy and I will have moved in to live with you, no one will suspect anything when we begin to spend our new found wealth discreetly."

"You shall also be able to live in security, comfort, privacy and happiness with us. I will need to explain all these things to my first wife, so she understands our dilemma and so there is no animosity between the two of you."

She lifted both arms towards the sky in the deathly room, and a tear rolled down her cheeks.

"Allah knows best," was all she said. Then shaking spasmodically, she burst into silent tears again.

"Qur'an (Al Baqarah 2:234)," explained Rosh, "prohibits widows from engaging themselves for four lunar months and ten days after the death of their husbands, unless they are pregnant. So it seems to be the prescribed mourning period for Muslim widows."

"Some Islamic scholars," Rosh answered, "consider this period as providing an acceptable balance between mourning of husband's death and protecting the widow from criticism that she might be subjected to, if she re-marries too quickly after her husband's death."

"Others have speculated that this period was required and sufficient, to ascertain accurately whether a woman was pregnant or not."

"Interestingly, four and a half months is about half the length of a normal pregnancy. Now, I am not a doctor and I don't know what external tools people of that age had to determine pregnancy. So I don't really know enough to comment on the pregnancy argument either which way."

"But how much time must a widow wait before remarrying," asked Hosh, " if she was pregnant when her husband died?"

"I think," answered Rosh, "the waiting period for a pregnant Muslim woman is still until after she delivers the child."

"Then what happened, Pa?" Josh asked impatiently, wanting to get on with the Arabian Nights tale of the forty thieves and their magical cave.