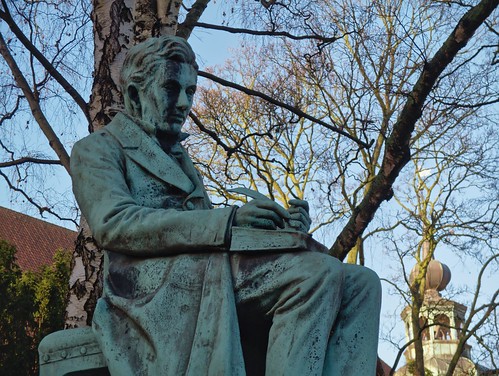 “Sounds too limiting, doesn’t it?” Isha was skeptical.

“Have more faith in yourself,” he answered. “The more we restrict ourselves, the more resourceful we become."

"Soren Kierkegaard said that in Either/Or, although he was talking more spiritually there. You should read him sometime.”

“Who was Søren Kierkegaard?” she asked, sitting him down at the lunch table. She loved his stories.

“A very interesting man,” he replied. "A great thinker born in Denmark in 1813. Denmark was dominated by the Lutheran State Church at the time, which was in turn greatly influenced by the rationalists Kant and Hegel.”

“While the Hegelian centered church was teaching rationality and the value of collective spirit, Kierkegaard advocated the importance of individual choice in the matter of belief in God, and wrote about the need to make ‘a leap of faith’ to believe.”

“What do you mean?” she asked.

“Well”, he said. “Argument was raging that faith should be based on reason. For me to believe in God, I must first have proof that God exists.”

"Our beliefs determine the choices we make in life, affect our actions. Kierkegaard redefined what it meant to be a believer, given the ‘subjective nature of truth’ and the ‘objective uncertainty of God’.”

“Fortunately for western philosophy, his father Michael, was very wealthy. It was his inheritance from his father, which allowed Kierkegaard to pursue his highly independent and controversial writing career.”

“Michael was an extremely religious guy. So, Soren had a stern Christian upbringing, which emphasized the sufferings of Christ and the folly of mob rule.”

“Tragedy also played an important role in Soren’s early life. Out of the seven children of Michael and Anne Kierkegaard, only Soren and Peter survived to reach adulthood.”

“So, Soren inherited not only his father’s wealth, power of mind and rigid interpretation of religion, but also a legacy of erratic moods and severe depression. A crucial event in the development of his thought occurred when he was 25, an event he named ‘The Great Earthquake’.”

“This was when he learnt his father’s deepest secret, that when Michael Kierkegaard was a boy, he had cursed God for his poverty and hardship.”

“Because of this, Michael had come to believe that a curse lay upon his family, that he himself was doomed to damnation and that all of his children would die before they reached 34 years of age, so none of them would outlive Christ.”

“His father’s premonitions deeply influenced Kierkegaard. You can see the effect it had on his thought: the emphasis on guilt, and on our relationship with the almighty.”

“Probably because he thought it unlikely that he would live to surpass Christ in age, he completed a prolific amount of work before his 34th birthday. His belief in an imminent death also changed his sense of personal priorities and introduced a certain honesty and integrity in his personal relationships.”

“Like Tolstoy, my father and I, had told our future wives all our faults before our marriage to them. Kierkegaard didn’t do that, but he did something very similar.”

“He had successfully pursued Regina Olsen, and they became engaged. Soon after this however, Kierkegaard had an abrupt change of heart and wondered if he was not mistaken in his decision. He cancelled their engagement and returned her ring.”

“People speculate about his reasons for doing this: that he felt unsuitable for Regina due to his depressive personality, that he realized he would most likely die young due to his ill health, that he felt his authorial aspirations would take all his energy and time.”

“Either way, Kierkegaard’s aborted engagement is consistent with aspects of his philosophy. He always stressed that an individual must make definitive choices, rather than pursue a path of accommodation.”

“I think he broke his engagement due to his empathy for Regina’s future well-being. But the break allowed him to pursue his philosophical and theological ambitions wholeheartedly, rather than sharing himself between his wife and his thought.”

“It is interesting to note that Kierkegaard never considered himself a philosopher, but rather a kind of poet. While he had written up several shorter literary works before his failed engagement, it was only in its aftermath that he began to articulate some of his more radical ideas.”

"He called the first section of his mature work ‘Indirect Communications’. He used many pseudonymous authors to portray his thought, each pseudonym writing from a different philosophical standpoint and maintaining a defensible and coherent position consistently.”

“Why use pseudonyms?” Isha asked.

“Maybe for anonymity," said Rosh. "Religious tolerance and being allowed to safely practice freedom of speech, are not commonly found in human history. It wasn't just the Muslims who issued fatwas, you know.”

"Ironical, isn't it," noted Isha, "that the man who preached the 'leap of faith' didn't have enough faith himself in his maker. Using pseudonyms to voice dissenting opinions! Did he not believe His maker could save him from the society he lived in?"

“Maybe!" Rosh faltered at her insight. "Or maybe it allowed him to forward philosophical and theological viewpoints that were not necessarily his own, but that he felt were worthy of critical discussion.”

“He did come out in the open though, later. At the end of the Concluding Unscientific Postscript, which was originally intended to be the summation of his thought, he revealed himself as the author of his various pseudonymous works.”

“By then, he had crystallized most of his own philosophy, and was ready to battle the influence of the Lutheran Church of Denmark without his armor of anonymity. Or maybe he had found faith himself. But it wasn't his fight against the State Church that interested me."

"All Danes were born Lutheran at the time, so they became automatic members of the Church. Just like born Hindus, most unquestioningly practised familiar rituals and dogmatic traditions that prevailed. People normally do so, even today.”

“What interested me in Kierkegaard was the realization that here was a man 200 years before me, thinking about how belief inherited through custom, tradition or lineage reduced the wonder of faith to a civil duty.”

“Like in post-Upanishadic India, up until recent times, religion was being practiced by the Danish population out of habit and fear, rather than through any individual choices made by people about their own lives and destiny.”

“This automatic affiliation with the church for every Dane, like with a temple for every Hindu, or with a mosque for every Muslim, had turned religion into just another bureaucracy through which the churches and their office bearers could exercise power.”

“How could a thoughtlessly inherited belief system provide salvation for any soul? To Kierkegaard, having faith was a very personal, a very conscious, a very courageous choice that one made in life.”

“Kierkegaard died in 1855 at a hospital in Copenhagen. He refused to have his last rites administered by the local priest, sarcastically stating that he had ‘no need of the ministration of a civil servant’.”

“So, Kierkegaard wasn't a hypocrite. He died, living as he had preached throughout his life.”

Next Story: A Leap Of Faith