Monk With The Midas Touch 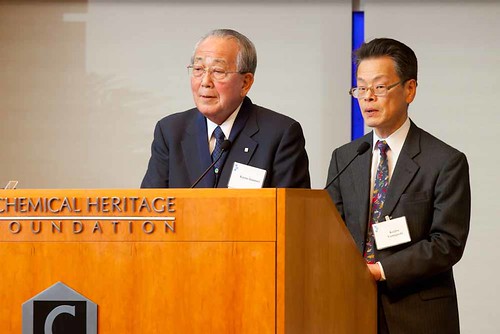 “Power corrupts,” argued Josh. “And absolute power corrupts absolutely. No exceptions. That was the lesson from The Animal Farm. And we see it everywhere in the world around us today.”

“Perception is a clash of mind and eye,” said Rosh. “The eye believes what it sees, the mind sees what it believes. Maybe you’re not looking hard enough, or looking only in the wrong places.”

“Power is amoral. Some abuse it, but some do put it to good use. King Janak, and King Bharat, after whom India was originally named, are still remembered for how they used their power for the common good.”

“Those times are long gone, Pa,” countered Josh. “We have a different breed of people now.”

“Be careful Josh, with what you let become a conviction. Because it molds your future. We don't see things as they are, we see things as we are. Remain open.”

“Inamori Kazuo (稲盛 和夫)?” laughed Rosh. “In my book, he’s a Buddhist monk with the Midas Touch. His story is a very inspiring one indeed.”

“An 83-year-old Japanese billionaire, who’s redefining how to do business successfully in the new world of today, with what many decry as old 'values of yesterday'."

“In a world where managers are obsessed with pleasing shareholders, Inamori, entrepreneur, management guru and Zen Buddhist priest, focuses instead on making his staff happy.”

“And it works. He setup Kyoto Ceramic over half a century ago. The headquarters of this electronics giant, now known as Kyocera, now gaze over the hills and temples of the ancient capital of Kyoto.”

“Then it moved into making silicon transistor headers for Fairchild Semiconductor and ceramic substrates for IBM, set up production in United States and became one of the first Japanese companies to list in USA."

“With personal net worth of over $1 billion, Inamori and family were Japan’s 32nd richest people in 2015. How did he do it?”

“If you want eggs, take care of the hen,” he said in a recent interview. “If you bully or kill the hen, it’s not going to work.”

“Modern management theory teaches that these hens are your customers. But for Inamori, they are his employees. When he talks about making them happy though, he doesn’t mean they can muck around.”

“He works hard like a true Shojin, and expects the same of his employees. A Shojin gives oneself with undaunted vigor to the cultivation of Buddha's ways. For him, happiness comes from working hard. From complete commitment and such devotion to a task that it elevates one's soul.”

“He wrote a book in 2004 in which he questioned Japanese people’s increasing tendency to value their leisure time. He might as well have been talking to Kiwi kids like you, who cherish their free time more than anything else.”

“It was a different world five decades ago,” said Isha, siding with her son. “I’m not so sure his doctrines would work today as successfully.”

“He took on the challenge of saving Japan Airlines (JAL)”, said Rosh, “the world’s 10th largest airline, when it went bankrupt in 2010. He was 77 years of age then and had had no experience in this industry.”

“He turned it around within two years, and had it relisted on the Tokyo Stock Exchange. His secret - change your employees’ mentality.”

“After becoming its CEO, he gave a small book on his philosophies to each staff member, which declared that the company was devoted to their growth.”

“He also explained the social significance of their work and outlined Buddhist-inspired principles for how employees should live, such as being humble and doing the right thing.”

“This made them proud of their airline, he said, making them work harder for its success. He leads by example, and is one of only a few CEOs around who cut their own pay in bad times.”

“Company leaders should seek to make all their employees happy, both materially and intellectually, he says, that is their purpose. It shouldn’t be to work for shareholders.”

"His views reveal that there are factions of Japanese business who don’t buy into Abenomics - Prime Minister Shinzo Abe’s reforms to make companies more responsible to shareholders."

“Companies do belong to shareholders, but hundreds or thousands of employees are also involved,” Inamori says. “The hen has to be healthy.”

“While that might make his investors uneasy, Inamori himself sees no conflict. If staff are happy, he says, they’ll work better. Earnings will improve. Companies shouldn’t be ashamed to make profits, if they’re pursued in a way that benefits society.”

“Interestingly, not all of his tactics are so spiritual though. His 'amoeba management' system split staff into often tiny units that make their own plans and track hourly efficiency using an original accounting system.”

“While Inamori may not be espousing western capitalist ways, his JAL turnaround cut roughly a third of the airline’s workforce, about 16,000 people.”

“Maybe his philosophy gained traction in Japan,” suggested Isha, “because work and personal lives in Japan are not as clearly demarcated as they are in other countries, and Shinto and Buddhism are Japan's two major religions. Shinto is as old as the Japanese culture, and Buddhism too was imported from India in the 6th century.”

“Inamori’s teachings may sound odd to western management gurus,” answered Rosh, “but there’s no shortage of people wanting to learn them. More than 4,500 business owners attended the annual convention of his Seiwajyuku School in Yokohama recently.”

“He has been an International Advisor of Goldman Sachs Group, Inc. In 2015, he was connected to 150 board members in 7 different organizations across 11 different industries.”

Next Story: The Lesser Evil