Put Your Glass Down 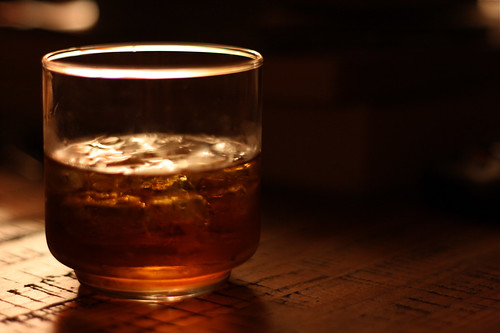 The sun was setting outside. Wisps of fluffy white cloud floated lazily against the backdrop of purple pink hues in a clear blue sky. Birds were chirping in the trees, getting ready to retire for the day.

Rosh looked outside at this panorama and felt at peace. He poured himself a drink, opened his ranch slider and walked out onto his vast wooden deck. There was no breeze outside.

Isha let herself in, walked up the staircase and saw him standing on the deck staring out at the vista. She had just arrived back from work. She walked out to him, and hugged him from behind. He smiled.

“Stressful,” she moaned. “Busy day, short-staffed, extra workload, shop-lifting incident and traffic woes driving both ways. Got told there would be no pay increase again this year. That’s fourth year in a row.”

“Another year or two of pay-freeze,” Rosh frowned, “and you’d all have fallen to minimum legal wage rate despite years of your hard work and loyalty. The company is making money, isn’t it?”

“It’s very profitable,” she assured him. “All senior staff have to go again on a retraining course next week. I don’t feel like going as I am still grieving my brother’s death. And, I hate that course instructor.”

“Chaos!” said Rosh quietly, contemplating the drink in his glass. “Thy name is life.”

“Did my medical test results arrive today?” she asked him. “And can you get our cars fixed this week. I haven’t got time, as I still haven’t caught up on chores pending due to our China visit.”

“Couldn’t sleep last night due to the stress, you know, and my elbow is still paining …”

She stopped suddenly in her tracks, noticing that he had raised his glass to her. She waited for the toast, half expecting to be asked the ‘half empty or half full’ question instead.

But he just smiled at her, and when he was certain he had her attention, asked, "How heavy is my glass?"

“What?” she was baffled.

"How heavy is my glass?" he repeated sincerely.

“And what would happen if I held it up like this for a few minutes?” he asked her again.

“And if I held it up like this for an hour?” he persisted.

“Your arm would be sore,” she replied. “Very sore!”

“You couldn’t,” she answered, still unclear about where he was heading. “You’ll have severe muscle stress. Aches and pains all over. You’ll risk stuffing up other systems of your body, if you persisted with that nonsense...”

“During all this,” he interrupted her again, “would the real weight of my glass change?”

“No,” she said after a pause, trying now to understand.

“Then what will cause the severe muscle stress?” he asked her simply. “The aches and pains?”

“Holding it up for too long,” she answered. “In either case, the real weight of the glass won't change, but the longer you hold it up, the heavier it’ll became."

“So, what should I do before I start to ache?” Rosh asked.

“Put your glass down!” she replied.

“Then why don’t you?” he asked, putting his glass down on the deck railing. She looked at him, confused.

“Problems in life are the same,” he explained. “Hold them up in your head for a few minutes, no tension. Nothing happens if you think about them for a while.”

“They become so when you won’t let them go. When you hold on to them for too long. It not only makes them look bigger than they are, it also effects other people and situations around you.”

“Some worry is useful. It is your body’s natural reminding mechanism, an alarm system. But too much strain about anything, or worrying about everything are no good. Stress needs to be managed.”

“Yeah,” she agreed, “we don’t set reminders for every little thing. Only the important ones. An alarm that goes off and just won’t stop is most times, a bigger nuisance than the thing that set it off.”

“Worrying about a problem doesn’t rectify it,” Rosh nodded. “Doing something about it does. It's important to think of problems and challenges in your life so you can tackle them, but it is even more important to put them down at the end of the day before you go to sleep.”

“That way, you are not stressed out. You wake up every day, fresh and alive, ready to handle any issue, take on any challenge that may come your way. There’s a difference between having worries and becoming a worry."

"So, free your mind! Remember to put your glass down. Learn to do it often. Whether the issues are at your workplace or at home, it is important to regularly put them aside. At least, for a while.”

Next Story: Get A Worry Doll