Swimming With The Tide 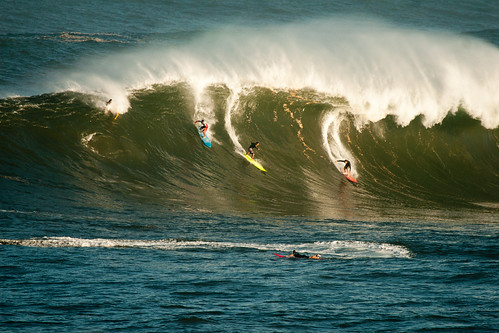 Previous: The Air Up There

Everybody had been present at the project meeting. It was a usual affair, except that the new contractor had shown a lot of initiative, made lots of suggestions, but they had all been vetoed down.

Personally, Rosh thought some of his suggestions were workable, but perhaps the management thought they rocked the boat too much.

The contractor caught up with him as he came out of the building to buy himself some lunch.

"So what did you think of what happened today?" asked the contractor.

"Some good suggestions," Rosh answered, "and good on you for making them. Keep up this initiative, this thinking outside the square and you will soon become an asset to the company."

"I'll never be an asset to this company," the contractor muttered.

"Why's that?" Rosh asked as they crossed the road.

"Because the shop-floor staff here play football. Mid-level managers are more interested in tennis. And the top management here has a distinct preference for golf."

Rosh looked at the contractor, completely baffled. He didn't know what he was talking about. What did sport preferences of staff and management have to do with their company or with anything else, he wondered.

The contractor noticed Rosh's puzzlement. He liked Rosh. This guy was a hard worker and a hard taskmaster, but he was also a straight shooter and played fair.

He was also quite smart, and the fact that he expected high standards from others that he worked with, actually inspired people like the contractor.

"As you go up the corporate ladder here," he explained, "the balls reduce in size."

Rosh laughed at his clever turn of the phrase. He had been given a lot of flak, and it was only natural that he gives some of it back. Rosh didn't mind because he didn't take it personally.

"Be patient," Rosh replied, as he paid for his takeaway, "Good things come to those who wait."

"Looks like I'll be retired," the contractor retorted, as he paid for his lunch, "before they listen to me here."

"Creativity and courage are great assets," said Rosh, as they started walking back towards their office, "but for success and longevity, you also need empathy and prudence."

"Change can be costly for an enterprise. The speed of change can also kill an organization. More important than Return on Money in Business and Investment is the Return of Money."

"Management has to be careful that they do not act or expand in a way that could adversely impact their own livelihood and the livelihood of their other employees. Profit is the reason a business exits, but cash bottlenecks have killed many a profitable business."

"You have thought as an entrepreneur. They were thinking as a manager. Perhaps, they will find your ideas and suggestions more useful if you heard what they want first and then channelized your creativity into suggesting solutions to the problems they already have."

"A manager and a couple of his staff were on their way to buy their lunch at the local takeaway. They saw an old lamp lying on the side of a road."

"One of the employees picked it up and rubbed it jokingly, as if it were Aladdin's Magic Lamp. But it was indeed a wonder lamp."

"Pfuf", and a genie emerged out of it. He said he was very grateful for his release from the lamp. An evil magician had imprisoned him there."

"I'll grant you guys a wish each now, before I go," he said to show them his gratitude, "So long as it is reasonable, you can have anything you want. So tell me, what would you like?"

"I've never heard a Jinn put a reasonability condition on wishes before granting them!" the contractor laughed.

"There's always a first time," Rosh jested, "Besides, the world is getting unreasonable. You've got to have checks and balances in place to manage your risk and exposure."

"Must have been a manager djinn!" the contractor gagged, "Would wishing for three wishes be an unreasonable wish?"

"I guess," agreed Rosh, "Anyway, the first employee said he wanted to be cruising in Mauritius on his own speed boat and have no worries. There you go, that's a three-in-one wish."

"Pfuff", and he was gone, cruising in Mauritius on his own speedboat and without any worries."

The other employee said, "I want to be in Florida with beautiful girls, plenty of grub and booze."

"Pfufff", and he was gone too, into Florida to enjoy beautiful girls, plenty of food and cocktails.

The manager thought for a minute, and said calmly, "I want these two idiots back in the office after lunch".

"So," he asked, "always allow the boss to speak first?"

Rosh nodded and winked at the contractor, taking his first bite as he sat down on the grass to eat his lunch. The afternoon was sunny, his kebabs looked tempting, and his trainee's progress was promising. What more could a man ask for?

"You'll make swift progress," he offered, "if you can learn to swim with the tide. Don't worry, be happy."