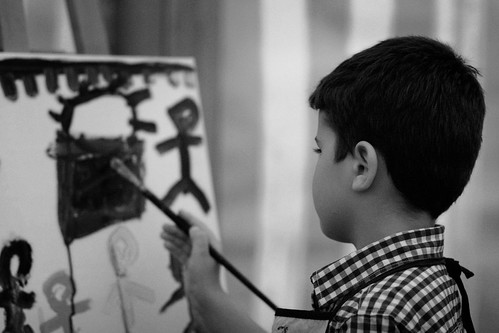 Is initiation by Life superior to parental guidance?

Insightful story of a painter who refused to ordain his own son in his ways.

Was the experiment successful?

“Sir,” said Suman. “Feel like hearing something from you!”

He was sitting on the lawn outside the Engineering College with some First Year Juniors, who had arrived from Bihar. These boys got along very well with him, ever since he had saved them from ragging.

“Narrate anything you wish,” Suman insisted.

All the boys gathered around him immediately. He laughed at their eagerness. Intimacy swelled up in his heart, and began to choke his throat.

The sun was setting. An invisible painter was creating new pictures every moment, on the canvas of the sky. A thought transformed into words and came up to his lips. He felt like voicing it out.

“I haven’t got anything written up,” he said, “but a story emerges in me as I witness this colorful evening. Let me try and bind it in words.”

The boys were listening to him with rapt attention. He broke-off a grass shoot, bit it between his teeth, and started speaking:

Whenever the child entered his father’s room while playing around, he was awed at seeing his father paint. Forgetting his play, he would long gaze upon the pictures.

He was amazed how different brush strokes gradually transformed into shapes. Observing the child’s curiosity, the painter invited the creator within him one day.

As the little boy sat silent and surprised, admiring his father’s latest work of art, the painter got up and put a paintbrush, colors, palette and a blank page in his little hands.

The lad looked up at his father, a question rooted in his look.

The painter smiled. “Create!” he said.

Confidence and hope lit up the child’s eyes with joy. He was delighted and thrilled.

The painter smiled. “Begin!” he said.

The child looked fervently at those items. But suddenly, he sobered. Silently, with his father’s gifts clenched in both his hands, his quiet look queried his father again.

The painter smiled. “Yourself!” he said.

“Not mine!” the father replied seriously, “Life’s! My teaching is nothing compared to your initiation by Life. And, it will leave my mark on your work.”

The child bowed his head, respectfully touched the creative materials to his forehead, but did not move. The painter understood his hesitation. He pointed a finger at the horizon, and said, “Study!”

Holding everything with great care in his tiny palms, the child returned. Days passed. And weeks. Then months.

One day, the father saw his son trying to mix colors. The painter became a silent spectator.

The child was excited. It was his first effort. But inadvertently, the paint spread everywhere.

The child was shocked. Lifting his head, when he found his father observing him, helpless tears rolled off his eyes.

“Analyze!” the painter said. He gave the child a blank new sheet, and retired.

A while later, the little boy tried again. His brush gave birth to some scribbles on the page. With curiosity and enthusiasm, the child brought the sheet to his father.

The painter looked at the artwork. Unaffectedly, he returned it to the child, and said, “Decide!”

The kid looked at the picture for a long time, then let it drop. His entreating eyes petitioned silently again. Compassion swelled up in the father. He gave a new leaf to the potential artist.

The child returned again. He placed the new sheet carefully. After much contemplation, he set his brush free again one day. A different shape surfaced on the paper.

The child looked at his work with pride and affection. Satisfied, he went back to his father with the painting. The painter looked at the new creation. Returned it to the boy, he said, “Redo!”

The child was surprised, but he became an examiner. He checked and examined the image from different angles. Eventually, he slowly dropped it there. Eyes bowed in mute solicitation.

The father smiled, and gave a new sheet to the young painter.

The old painter used to wonder, how his grandson twittered and played like his son had done. Time held his grandson’s hand and guided him through childhood to puberty.

One day, as he did every day, the grandson was sitting alone, beholding nature.

‘It’s time for his education,’ thought the old man.

Bracing against the armrest of his chair, he stood up, and with the help of his walking stick, walked near his grandson. The youth was imploring the sky:

“O Life! Even if I am unable to color your pages the best, please give me a new leaf to try again.”

A spontaneous smile flashed on the elder’s face. Inspiration is but a sign. The eternal teacher Life had accepted his grandson as student.

Breathing a contented sigh, he returned and sank back into his chair again. The education had begun. Today had been the first lesson.

Next TaleTown Story: Marketing Made Easy