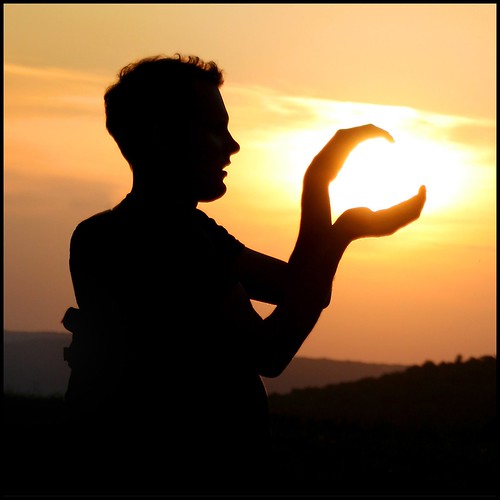 “Midas was stupid”, Josh voiced his opinion, “why didn’t he just wear gloves? That would have been much safer. He could have had the gold and touched things without turning them into gold.”

There was pin drop silence for a moment. Then Hosh spoke up.

“He couldn’t even have put them on", he said, "without touching them first. And the moment he touched them, they would have turned into gold.”

“So even if he wanted to wear gloves, he couldn’t possibly have put his hand in them at all, as they are initially flaccid and all crumpled up.”

“It is only when we push our hands into them that our gloves give way and become a good fit around our hands."

"But gold cannot be bent just by flexing our fingers. So our fingers wouldn’t even be able to get in after the glove has been transformed.”

“He could have had a wooden mitten made”, Josh suggested after a moment’s thought, “anything to shield his hands from accidently touching things, including himself.”

“Even if he couldn’t bend his fingers in them, they’d be out of harm’s way. Until he needed them out to make more gold. It would have been much safer.”

“And how would he have washed his potty?” Hosh argued back, “Or scratched himself? No, his gift was cruel. Very cruel to him and to all around him.”

“With this gift, there was no way Midas could have prevented himself from turning everything around him into gold. Nobody around him was safe. Not even his own self.”

“Because you see, he wished that everything he touched to be turned into gold! Not just what he touched with his hands. We can touch with any part of our body. Our whole skin is our sense organ.”

“That means he could never have kissed anyone ever again. Never been able to drink, or eat. Even when he was being fed by others.”

“Midas should have thought before he wished for anything”, Josh hated losing an argument, “We should think before we open our mouths. Right Pa?”

“And Kings are already rich, aren’t they?” Josh continued, “Then why did he want more gold?”

“Cos he was greedy”, Isha was tired after a long day and wanted to go to bed, “He got what he deserved. This story was a lesson to all who are greedy. So, don’t be greedy!”

“That’s certainly one moral of this story that kids have been taught”, said Rosh, “But stories are great capsules of wisdom. The more you dive in them, the more insights you discover.”

“Greed is bad”, Hosh took his father’s cue, “It squeezes the truly valuable things out of life. Only after he lost his daughter and could neither eat nor drink, that Midas learnt what is really valuable in life.”

Rosh nodded. Words of a long forgotten Ghazal, sung by Jagjit Singh, flashed on the canvas of his consciousness. He hummed softly:

“What do they mean?” asked Josh.

“Take my wealth”, answered Rosh, “take my glory too. It’s ok if you snatch my youth from me. But please return the springs of my childhood, those paper boats, those waters of rain.”

“Life is more precious than money”, Hosh clarified his father’s import to his younger brother, “Only after losing the real things in life, do we understand how precious they are.”

“Only after turning them into gold, did Midas realize what is truly precious. To be able to touch your daughter. Taste an apple. Smell a rose. Gold is pretty, but you can neither smell it, nor taste it.”

“Yea” countered Josh, “But you can buy apples and roses with it. As many as you want. I’d still rather have the power to convert an apple into gold, so I could buy lots more apples with it.”

“And convert your daughter into gold too?” flared Isha, “Human life is worth a lot more than gold. We spend money to keep ourselves healthy. Or haven’t you learnt any lessons?”

“Then why does Pa work so hard for money?” asked Josh, “he’s losing his health for it. Why do they show in movies someone murdering someone else for 10 bucks?”

“Stop arguing”, Isha thundered, “Midas learnt the value of love over gold when he lost his child. The message is that wealth is not the most valuable thing in life. Money can’t buy happiness.”

“People weren’t very smart back then!” Josh retorted. He wasn’t cowed by his mother’s anger. He pressed on.

“He should of wished for gold”, he said, “Instead of wishing to turn everything he touched into gold!”

Rosh stared silently at his younger son and wondered.

‘I stand no chance with him,’ he thought, ‘he won’t learn from us. Like me then, he’ll have to learn at the school of hard knocks. And life ain’t a cheap or lenient teacher.’

‘But he isn’t wrong, is he? What would I have done, if I had Midas’ choice? Was Midas really not smart enough to use his gift?’

‘It may be the answers that provide us solutions and make our lives livable’, he realized, ‘but it is the questions that send us on our quests. Without the power and freedom to ask them, humanity would be nothing.’

“What if Midas wasn’t greedy?” he took a deep breath and suggested, “Life isn’t just black or white. It has many shades of gray. Though not for fools and fanatics, who are always so sure of themselves. But we are neither, are we?”