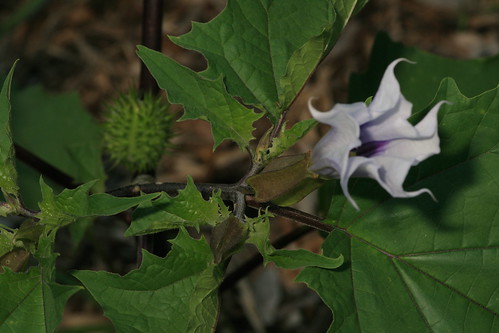 Hosh reveals why she chose to use these...

"Then, Marjina hastened out into the courtyard," Rosh continued the Arabian Nights tale, "and pulled out some hemp plants growing in one corner. She crumpled them as much as she could."

"She also plucked a few Datura pods. She knew what Abdullah used these plants for. Then she hurried back with them into the kitchen."

"The oil was beginning to heat up. She knew she was running out of time. She would have to act before it started to smoke and caught fire."

"After another quick fanning of the logs burning underneath the cauldron, she threw the crumpled hemp plants and Datura pods beside them in a corner of the fire. She wanted them to smoke and not burn out too fast."

"Then picking up the handled large pot she had just used for pouring oil and pulling down a couple of muslin cloths from the shelf, she silently raced out of the kitchen, pushing its door shut behind her."

"In the cool, fresh, night air of the courtyard, she tied one muslin cloth over her nose and the other around the handle of her pot. Then, she waited."

"Why is she smoking the hemp plants and Datura pods, Pa?" Josh peeked out of the duvet again, perplexed. "So the robbers choke to death from the smoke?"

"No," Hosh answered for his father. "If the variety of the Hemp plant she's used is Marijuana, it'll anesthetize them. If it is not, it will still give them anoxia. The fine vapor from the smouldering hemp fibres, flowers, buds and seeds, will spread into the kitchen and the alcove inside it."

"The assassins are under instructions to wait for the Captain's signal. They also can't move until he comes and frees them. They are hiding in cramped barrels with just little holes for air. And Marjina has barred the door to reduce fresh air supply while fumigating the kitchen with Hemp vapor."

"So, right now they are unsuspectingly breathing in heavy quantities of this vapor and will be anesthetized. Smoke from Datura pods is also going to make them hallucinate at best. At worst, its dosage might even be lethal for them all."

"Meanwhile, oil is heating up on the fire. If the cooped-up chickens don't make a move now, they are all going to be cooked in their own oil before they even know it. Death draws near. On silent wings."

"I've already told you," Hosh was saying, "that third degree burns are painless because our biggest sensory organ, skin, is completely destroyed by the burn. Anesthetics like this hemp smoke, and hallucinogens like this Datura smoke, are going to deaden pain further by inducing a state of anesthesia in the thieves."

"This means that some or all of their senses, especially touch, will stop functioning or will be reduced. So, when the super hot oil is poured on them, they shouldn't even feel it, let alone cry out and alert others."

"With Mustard Oil at 200+ degrees Celsius, which is over twice the temperature at which water boils, they are going to get third, fourth, fifth and sixth degree of burns when the oil hits them."

"It will be burning them fatally, yet they won't be feeling a thing. These levels of burns cause little or no pain, because the nerves and tissues in the skin get damaged."

"Once the skin and muscle is gone, there may be nothing left to hold their internal organs in place. These may start falling out and immediately get burnt too or become infected."

"Oil also acts as a heat trap on burnt skin. So while they are still away with the fairies, oil will continue to feed upon their flesh like flame itself. Remember, Pa gave us that quote earlier as a clue, when he was telling us how oil destroyed the enemy at the battle of Jotapata."

"Were those words a clue?" Josh was positively animated now, trying to remember everything else his father had said earlier.

"The super-heated oil," Hosh continued, "will cause deep damage also as it collects and builds up near their feet and legs inside the barrel, after having easily run down their whole body from head to foot and under their clothes."

"Except for the holes in the wooden covers, they are sitting in an airtight barrel. This means super hot oil can go in from the top, but not come out from the bottom. If they keep sitting soaked in this super hot oil, there will be no fight left in them in no time at all."

"But," Isha objected, "oil won't flow down these tiny air holes at all, when Marjina pours a potful on each cover and the oil immediately chokes off all its air holes."

"Good point," agreed Hosh. "Marjina will have to keep at least one air hole uncovered when she pours the boiling oil on top of the wooden barrel covers. Even a single unplugged air hole would be enough to keep the air pressure inside and outside the barrel equalized."

"Oil will then rush down through the other air holes in the wooden covers and quickly scald the anesthetized thieves hidden inside oil barrels. This is also why we sometimes make a hole in very tight lids that aren't turning on glass jars, to open them. Release pressure of the air trapped inside!"

"Interesting observation," Rosh corrected them. "But air always moves from areas of high pressure to areas of low pressure. Also, there's gravity and the fact that oil is denser than the air inside the barrel."

"So, even when all air vents in the barrel cover get clogged out by oil, oil should still go through all the holes. If, as Hosh noted, at least one hole could be kept unplugged, oil will fall through the air holes faster than it would have done otherwise."

"Check this out as an experiment in the science lab next time with your teacher's permission, by corking out a test tube mid-way, making some holes through the cork and then pouring oil on the cork top in the test tube."

"Even if oil could not flow through the plugged out air vents," Hosh added, "the air supply for the hallucinating or anesthetized bandit inside would still be cut off, suffocating him to death. After being smoked out, he wouldn't have the strength or will to dislodge the oil or crack open the cover from inside the barrel anyway."

"So," Josh moaned, tired of their logistics debates, "can she pour the oil out now, Pa?"