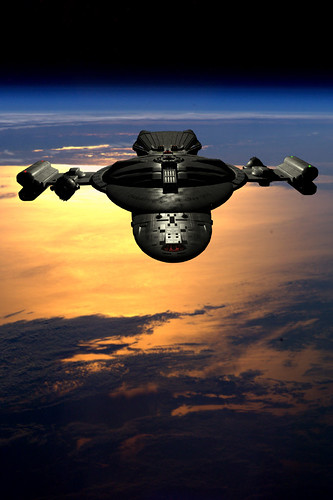 The elite commando journeys back to Space Sector 47B9 with the Dark Energy vials he has stolen.

Unaware of the danger…

The parents were still slowly trickling in for the Parent Teacher Meeting. The teacher looked at his watch, and smiled at the assembled parents.

'Let's give them five more minutes," he announced. "Then, we'll begin."

Although my mind had healed fast, the body that housed it was still broken. I faltered.

Even with Cold Steel unsprung, the mere thought of it sent a shiver up my spine. Images etched in my memory exploded on the blank canvas of my mind.

But there was no time to lose.

Without a word spoken, I mentally commanded my torturer turned slave liberator, to escort me out of his high security facility. He turned to the door and bent down for a retinal scan.

Guard robots stationed outside our door seemed surprised when we both walked out, but no one stopped us. Guards of high security facilities are mostly on a need-to-know basis to protect the security and identity of occupants. This one should be no different. We’d banked on that in our training.

I was still fascinated by the elaborate technological security measures of this facility. My interrogator used different things to open different doors and navigate through infrared detectors and lasers. A voice command here, a fingerprint scan there. A temperature check at one door, a blood scan at another.

Trust in technology was ubiquitous, trust in people absent. I didn’t really care, as this worked in my favor. The guards stationed on the perimeter took no notice of us, as my savior chauffeured me out of his facility in his own car.

It was unbelievably easy - almost an anti-climax to the high drama, blood and sweat that had preceded my escape.

As he drove me to my rendezvous, I asked him, "How did you find me?"

He told me about the Micro Global Positioning System (MGPS) beacon etched onto the Dark Energy vials. To avoid detection, their transceivers were programmed to transmit co-ordinates on secret intergalactic frequencies only when they were in motion.

So, whenever the vials were being moved, motion sensors automatically triggered and transmitted their position co-ordinates in periodic signal streams, on undetectable wavelengths to an unknown destination.

I cursed. So, they must have been transmitting all along, as I now eloped with them. I was visible and vulnerable. I had to vanish. Fast!

There was no time to analyze the situation and risks, but I was almost at my rendezvous.

Wordlessly, I whistled an ultrasonic octet. I was rewarded immediately by the briefest humming sound from my camouflaged ship, as its engines fired.

I ran out of his moving car even before he had a chance to slow down. My invisible vessel identified my racing form, plucked me out of thin air and teleported me back into my pilot seat in a flash.

I set course to Space Sector 47B9 and hit the autopilot. Noticing him in the still moving car outside, I beamed a mental command for him to return to Lab, and do one last thing for me.

No harm in sending a Trojan back to my enemy. At worst, he would still function as a decoy and buy me some time. Then I forgot all about him and concentrated on more pressing things at hand.

I sprayed silver over my battle suit chest area to cut the MGPS transmissions from the vial. As my vessel zipped through Space unchallenged, I dictated an ACC4MC (Advance Communication Capsule For Mission Control).

'Soon, it would be over,' I thought, exhaling an involuntary sigh of relief. 'I survived Cold Steel. I escaped. I am still in one piece. I am headed home, with my prize. What more could I have asked for?'

I settled back in my seat, and let myself drift. I was safe at last...

A small stubby figure stood in the middle of another of those small rooms, illuminated by light that perforated down from the low white ceiling. The flooring was fibre glass, but the room smelt like a hospital.

He watched intently as a tracker rose high in the sky on his 3D screens.

“Finally,” he said, satisfied. "We’ll know where they came from. The bio-tracker we cultured in him has flowered well."

"What about the Dark Energy vials he stole?" his assistant croaked.

"Let them break the sheaths. The GRB (Gamma Ray burst) will cook their planet."

Next Story: Is A Goat A Goat?