Previous: The Pursuit Of Happiness 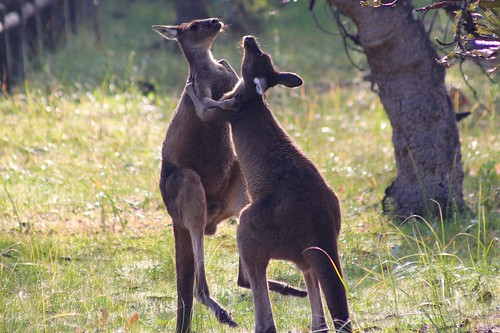 "Pa", Josh asked after the family had eaten their dinner one evening, "I've got to give a speech on Sibling Rivalry next week at school and I have penned down some thoughts. Can we discuss them now?"

"Sure", invited Rosh, "Everyone is here. Everyone can listen and join in."

"Sibling rivalry is the jealousy," began Josh, "competition or fighting between brothers and sisters, whether blood related or not. It is as old as humankind."

"Bible has many stories on it. The Book of Genesis describes how Cain killed Abel in a fit of jealousy because God preferred his younger brother's offering to his own."

"In other Bible stories, Jacob tricks his brother Esau out of his inheritance, sisters Leah and Rachel compete for the love of Jacob, and Joseph's brothers are so jealous of him that they effectively sell him into slavery."

"Ok, sibling rivalry may be ancient and common," Rosh interrupted, "but is it normal?"

"Well," replied Josh, "that depends on your point of view. Children often fight more in families where parents think aggression between siblings is normal and an acceptable way to resolve conflicts."

"How parents treat their kids and react to conflict themselves can also make a big difference to how well siblings get along. If children see their parents shout at each other, slam doors and argue loudly, then it's quite likely they'll behave in the same way with each other."

"Interesting," said Rosh, "But it still doesn't tell us whether you think it is normal or not."

"Well," said Josh, "Stress in kid's lives can shorten their fuses, and decrease their ability to tolerate frustration, leading to more conflict. What can lead to murder, can't be normal!"

"Tales of murderous siblings abound in human history – whether they be of the Muslim Emperor Aurangzeb or those of the Shakespearean King Richard III of England."

"The Indian epic Mahabharat tells a gory tale of war and wholesale slaughter of men caused by sibling rivalry within a clan."

"So it's not good!" Isha summarized, pretty confident that she knew what was to follow now.

"Yea," he threw a twister, "But having a sibling ain't much better either. It sucks being a sibling - whether you are the eldest, somewhere in the middle, or the youngest."

"The eldest has to lead, take initiative, look after the youngsters as well as take the blame when things go wrong. That's not fair."

"Nobody likes being in the middle, as the eldest gets all the privileges and the youngest gets away with murder. Being the youngest, or being 'the baby', you always get treated like 'the baby'."

"Are you saying," Isha was startled by his argument, "that you'd rather be the only child?"

"Maybe," Josh replied, grinning teasingly at her, "Even the animals have wizened up to this. Did you know that one in four spotted hyena pups is killed by their own litter-mate."

"Offspring of the black eagle are even more ruthless. The eagle lays two eggs, and the first chick to hatch makes sure its brother or sister never makes it out of the nest alive."

"In his book on Sibling Abuse, Vernon Wiehe says that Abuse is more enduring. It is a longer term pattern that is more likely to lead to victimization of the other rather than just being occasional disagreements."

"Rivalry tends to be incident-specific, he says, reciprocal and obvious to others, while abuse flourishes in secrecy and is due to an imbalance of power."

"Sibling rivalry starts," Josh agreed, "when kids feel they are getting unequal amounts of parent's attention. They might feel their relationship with parents is threatened by the arrival of a new baby."

"Birth order, personality differences, parental treatment and experiences outside the family can complicate things further. According to child psychologist Sylvia Rimm, sibling rivalry is particularly intense when children are very close in age, of the same gender, or where one is intellectually gifted."

"When you think about it, there's very little reason why siblings should even like each other. Unlike friends, siblings don't get to choose their family or each other. But they still have to put up with them."

"Unlike friends, they may have different interests, big age differences, belong to different hobby or cultural groups, or go to different schools. But the biggest problem is that they have to share the most important people in their lives: their parents."

"So let's be like the eagle. Eradicate our siblings off the planet so there's no more of the fighting, hassling or competition for food, stuff or parental attention."

He paused suddenly, noticing the horrified look on Isha's face. She just wasn't getting his provocative intent.

"He understands me even when my parents don't. I'd rather fight with him than be alone, because even fighting with him is fun. It bonds me more with him. We might argue whether a glass is half full or half empty, but together we try more often to fill the glass, rather than to empty it."

"If I had to act like an animal, I'd rather hunt in a pack with wolves than fly alone like an eagle. I'd rather help feed and guard my younger siblings like wolves do, rather than kill them like hyenas."