The Wolf And The Lamb

Previous: What Type's Your Salary? 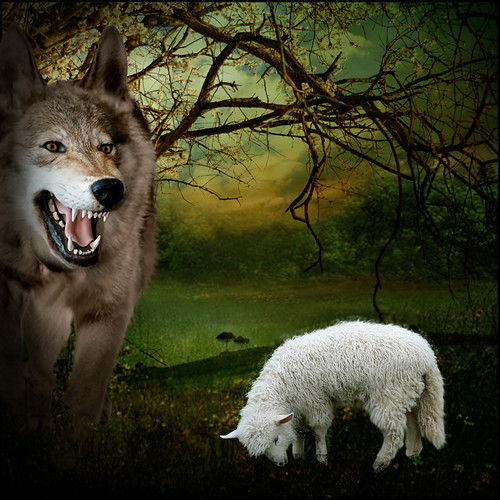 "The bully beat me up again today," Josh sobbed, "even though it wasn't my fault."

Rosh hugged him close and heard his story. It was quickly coming to a point when Josh was beginning to lose his desire to go to school at all.

He didn't want to go to school authorities again, as he wasn't sure who to blame for these repeat incidences. He knew Josh was naughty too, but the repeat beatings were another matter altogether.

"From next week, you are going to join Karate lessons," he said after Josh had finished speaking, "you will at least learn to defend yourself, if you can't learn to keep out of trouble in the first place."

"Let me also tell you something very important about bullies. You can't reason with them. When I was a child your age I read an Aesopian story about a Wolf and a Lamb."

"There are many versions of it around, and there’s even a similar one claimed to be from Panchtantra. The message though, is the same.”

‘There's my dinner,’ he thought, ‘if I can find some excuse to grab it.’

“Hey you,” he called out to the lamb, "How dare you dirty the water I am drinking?"

"No Sir," gasped the surprised lambkin, "if the water is muddy up there, it cannot be because of anything I’ve done, as it runs downhill from you to me."

“We’ll have to investigate that,” warned the wolf as he walked down menacingly towards the little lamb. The lamb stood his ground knowing that he hadn’t done anything wrong and had spoken the truth.

"I know you!" growled the wolf with sudden recognition, as he inched closer to the lamb, "you are the guy who swore at me this time last year."

"Couldn’t have been me, Sir" refuted the lamb, "I am not even six months old yet."

“Must have been your father then,” snapped the wolf, getting closer and angrier.

The lamb sensed real danger now, and began to tremble. But it was too late to run.

“Sir,” he pleaded, completely scared, “I can only apologize for my father, if he ever did so.”

“How dare you doubt my word, you shithead!” snarled the wolf, his fangs now bared with anger, “You need to be taught some manners.”

“Sorry Sir,” the lambkin bleated, “if I have offended you. I didn’t mean to. I’ll never do it again.”

“No you won’t,” thundered the wolf, “Cos you won’t be alive to insult me again.”

With that, he pounced on the lambkin and tore him apart.

"Any excuse will serve a bully. It is pointless trying to reason with them or trying to placate them. You only make them angrier by doing so. But there are other ways to deal with them. The easiest is not to be caught alone with them. Stay in groups. Always. There is safety in the crowd.”

“Bullies are cowards really, and they will only bully you if they catch you in a place where no one can see them, or where they can scare the others around them. So, make friends and be with friends. Don't be alone.”

"Remember the Spanish saying, Lobo hambriento no tiene asiento. A hungry wolf doesn't hang about. So, try and stay away from one, as much as you can."

Next: 魚之樂, The Happiness Of Fish