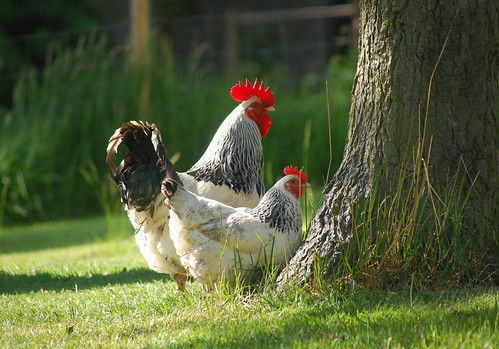 "Pa, we could have our own chooks if we didn't eat these eggs," said Josh.

"Well, actually we can't," said Rosh, "because these eggs we buy from the supermarket are not fertilized. Chooks can hatch only from fertilized eggs."

"A hen must mate with a rooster in order for her egg to be fertilized. Only a fertilized egg contains both the male and female genetic material necessary to create an embryo inside the egg."

"An unfertilized egg does not contain the rooster's genetic material, so a chick can never hatch from that egg."

"But then, how can an egg form in the hen?" Josh was surprised.

"Hens don't need roosters to lay eggs," said Rosh, "A rooster is needed only to fertilize them. Hens will lay just as many eggs whether there's a rooster around or not."

Josh looked at his father uncomprehendingly.

"A hen's ovary contains all the ova it will ever have when it's hatched," Rosh explained, "So, hens are born with all the eggs they can ever lay."

"That can't be right," Josh objected, "they lay a big fat egg every day of their lives. If they were born with all their eggs, they'd be really really fat."

"Hens don't lay an egg every day," said Rosh, "In the height of winter, cold temperatures slow the rate of lay as hens seek to preserve their energy. In the height of summer too, they grow lethargic in the heat and again produce fewer eggs."

"Even in perfect conditions, hens can't lay an egg every day of their lives because it takes them about 25 hours to make each egg. And they do stop laying too, when they get older."

"When do they stop laying?" Josh asked.

"There is no age in particular," answered Rosh, "some can stop at 5 years old, while others will continue to lay for 10-15 years."

"But here's the deal with a hen's reproductive system. Eggs are not formed from a hen mating with a rooster. They are formed from ova which are already present within her when she is hatched. "

"The hen has only one ovary, but the ovary has several thousand ova in different stages of development and looks like a bunch of grapes."

Josh shook his head, more perplexed now than before.

"You can see now, why the question," laughed Rosh, "whether the hen came first or the egg, has baffled mankind for centuries."

"A yolk is released from the ovary into the oviduct when it has grown to the right size. Then it travels down the oviduct to acquire its whites, membranes, shell and shell color, if any. Thus an egg is complete and finally ready to come out of the hen."

"Soon after one egg is laid, this process starts again inside the hen. So, a hen is like an egg factory, regularly delivering eggs."

"Unless there is a rooster around to mate with her, she will keep delivering eggs with only her own genetic material throughout her laying life. These eggs will look exactly like the fertilized eggs, but they will be infertile."

"So how does an egg get fertilized?" Josh asked, "does the rooster mate with an egg?"

"No, you egghead," laughed Rosh, "The rooster mates with the hen. His semen gets automatically collected and stored in "sperm nest" areas within her oviduct for later fertilization of eggs. Fertilization happens inside the oviduct."

"This is a natural survival mechanism by birds for making fertile hatching eggs even after their males are no longer available."

"That is why even when the rooster in a flock dies or is removed, the hens will continue to make fertile eggs for up to four weeks after that."

"Birds like turkeys and waterfowl have even longer periods during which fertile eggs can be produced without mating."

"You may have seen Roosters sitting on hens to mate, but they don't have a penis. Like all other animals, they do have testes though, where their sperm are produced."

"Roosters have two very large testicles, one on each side of the backbone in the body cavity right behind their lungs. Their sperm formation takes about 15 days. The rooster's semen contains around 5 billion sperm per cc, about 40 times as much as that of a human."

"Once a rooster matures and if he is maintained properly, he will manufacture about 35,000 sperm every second of his life."

"However, just like the males of many animal species, the fertilizing potential of roosters varies. Some are extremely fertile, some aren't."

"When are they mature enough?" asked Josh.

"Roosters are sexually mature at the same age as hens start to lay," Rosh said, "Light breeds anything from 16-20 weeks, heavy breeds 20-26 weeks. Birds maturing as the days get shorter, will mature at an older age."

"But Roosters aren't selected for breeding until the age of 24-32 weeks when their sperm quality has increased. Most roosters can't produce high-quality sperm for long."

Next TaleTown Story: How Eggs Fertilize?