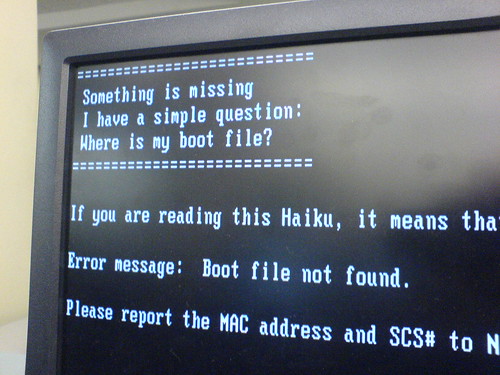 Previous Story: What Do We Work For?

“What is this?” Isha asked excitedly. “A briefcase computer?”

His work had decided that all interviewers with computer knowledge were to take a laptop home from work to get acquainted with the new interviewing software that the company had bought, to use in the field for their next interviewing project. Rosh had been mucking around on it in his office.

“They’ve been around since I was a teenager, but I hadn’t worked on one before until I started working here.”

“Osborne 1, released in 1981 and named after its inventor Adam Osborne, cost less than two grand and came bundled with about 1,500 USD worth of programs.”

“Interestingly, it was an 8-bit CPU machine that weighed over 10kg, had no battery, dual 5.25-inch (13.3 cm) single-density floppy disk drives and a tiny 5-inch in-built CRT screen.”

“Teach me how it works,” said Isha.

“Sure,” said Rosh, and closed the interviewing software. But the programme froze and gave him an error message. Rosh tried short-cut keys but nothing happened.

“What do we do now?” Isha was afraid. The last thing she wanted was expensive borrowed equipment going kaput on them.

“Weep!” Rosh sighed, and pushed the machine away in frustration.

“This message is really scary,” Isha said, staring at the cryptic impersonal warning.

Rosh noticed the dread in her tone. She was pregnant again, and the last thing he wanted was for her to stress out on something like this.

“Yea,” he agreed, catching hold of her skirt and pulling her towards him. “They should be a bit more poetic. That’ll be more helpful. Something like:”

I ate your Web page.
Forgive me. It was juicy
And tart on my tongue.

“Yeah right!” she smiled suddenly, his assured demeanor instantly releasing her tension and comforting her. “Why don’t they write them like that then?”

“Actually, that poetic error message is a real one,” said Rosh, “It originated at a server at MIT, and was posted to a mailing list in 1996.”

“Funny, isn’t it!” he laughed too. “The American magazine Salon, ran a Challenge earlier this year, inviting readers to replace the unhelpful Microsoft error messages with Haiku. It got over 200 submissions.”

“What is Haiku?” Isha asked.

“Japanese poetry,” he answered, “Formal Haiku has strict construction rules. Each poem can only have 17 syllables, in a total of three lines. Five syllables have to be in the first line, seven in the second, and five in the third line.”

“The MIT one was a bit funny,” she said. “Do you remember any others like that?”

Rosh nodded. Slowly, they came back to him, as he tried to recount a few comical ones for her:

Serious error.
All shortcuts have disappeared.
Screen, mind, both are blank.... (Ian Hughes)

A file that big?
It might be very useful.
But now it is gone. (David J. Liszewski)

Everything is gone;
Your life's work has been destroyed.
Squeeze trigger (yes/no)? (David Carlson)

With searching comes loss
And the presence of absence:
"My Novel" not found. (Howard Korder)

Stay the patient course.
Of little worth is your ire.
The network is down. (David Ansel)

A crash reduces
your expensive computer
to a simple stone. (James Lopez)

Out of memory.
We wish to hold the whole sky,
But we never will. (Francis Heaney)

You step in the stream,
but the water has moved on.
This page is not here. (Cass Whittington)

Errors have occurred.
We won't tell you where or why.
Lazy programmers. (Charlie Gibbs)

To have no errors
Would be life without meaning
No struggle, no joy (Brian M. Porter)

Windows NT crashed.
I am the Blue Screen of Death.
No one hears your screams. (Peter Rothman)

Yesterday it worked.
Today it is not working.
Windows is like that. (Margaret Segall)

Printer not ready.
Could be a fatal error.
Have a pen handy? (Pat Davis)

The Tao that is seen
Is not the true Tao, until
You bring fresh toner. (Bill Torcaso)

Having been erased,
The document you're seeking
Must now be retyped. (Judy Birmingham)

Program aborting:
Close all that you’ve worked on.
You ask far too much. (Mike Hagler)

She was rolling in mirth by now. Some of these were real beauties.

“Have they replaced the computer error messages with their own Haikus in Japan then?” she asked.

“Not yet,” Rosh laughed with her. “It was just a bit of creative fun. Most of these clever and inventive error messages weren’t even written by the Japanese. But you never know. It’s early days yet …”

“What are we going to do about this laptop now?” she asked again, her concern returning.

He winked at her mischievously, and replied with another Haiku, this one by Suzie Wagner:

Chaos reigns within.
Reflect, repent, and reboot.
Order shall return.

Next Story: Yours Faithfully