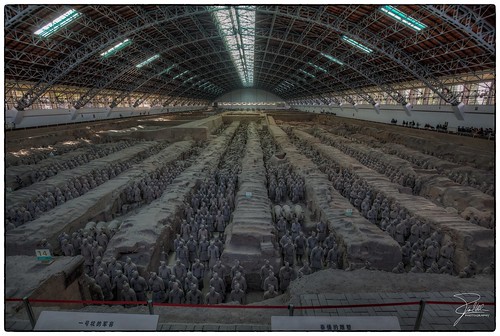 No two terracotta warrior figures in this vast army were completely identical. Do you know why?

“Where are we going today?” asked Isha, when she was finally ready for the day.

“To see terra cotta warriors,” Rosh answered, as they boarded a local bus to the Xi’an Train Station.

“Ya,” smiled Rosh. “The Terracotta Army is a collection of terracotta sculptures of the army of Qin Shi Huang, the first Emperor of China."

"Like Akbar, he became King when he was only 13 years of age. As Akbar had set about uniting India under him, Qin set about conquering and uniting China.”

“Did you know that Qin is pronounced Chin. So, some scholars have theorised that the word China and its earlier related forms were ultimately derived from the state of "Qin", the westernmost of the Chinese kingdoms during the Zhou dynasty which unified China to form the Qin dynasty."

“Is that how China got its name?” asked Isha. “From Emperor Qin Shihuang?”

“I can’t say,” replied Rosh, “but the common way Chinese write the name China in their script, makes it pronounce as Zhongguo (中国), which literally means 'middle nation'. Obviously, ancient Chinese weren’t the only people to imagine that they lived at the centre of the Earth.”

“Since joining the International Convention Concerning the Protection of World Cultural and Natural Heritage in 1985, China has also made large-scale renovations on many of its cultural heritage sites, making them some of the best preserved sites now in the world.”

“Many of these sites are in Beijing – the Temple of Heaven, the Great Wall, the Forbidden City, the Summer Palace, the Grand Canal, and the 'Peking Man' site at Zhoukoudian. I’ll be taking you to visit some of these when we reach Beijing.”

“Tell me more about these Terracotta warriors!” Isha commanded, as she looked out of her tourist bus window at the scenic route to the Mausoleum from Xian train station.

“Interestingly, no two figures in the vast buried army are completely identical,” Rosh piqued her curiosity with trivia he knew was bound to do that. “The figures vary in height according to their roles, with generals being the tallest.”

“All terracotta warriors found, are life-sized. Besides height, they also vary in uniform and hairstyle, in accordance with rank. We now know that the warriors’ gear was originally also painted with bright pink, red, green, blue, black, brown, white and lilac pigments."

"Most of the figures also originally held real weapons such as sharp spears, swords, or crossbows. Some of these weapons, such as the swords were coated with a 10–15 micrometre layers of chromium dioxide, which has kept these swords rust-free for 2,000 years."

"Dating from 3rd century BC, the 8,000 soldiers, 130 chariots with 520 horses and 150 cavalry horses (estimated figures), the majority of which remained buried in three pits near Qin Shi Huang's mausoleum, were probably buried there to help guard his empire in his afterlife."

"The coloured lacquer finish, real weapons and individual facial features would have given these life-sized figurines a realistic feel when they were buried here first. Ponder for a moment, that we don’t have a photo of any man who lived 200 years after Buddha or 250 years before Christ.”

“Whatever images we have created or sculptures we have crafted to date, are figments of pure imagination, because no one amongst us today, knows what they really looked like in reality then.”

“Don’t you shudder when you think that today, when you are going to stand in front of this Terracotta Army, you will come face to face with 2,500 year old men.”

“Why? Because artisans of Qin Shihuang made realistic portraits of these soldiers. No man’s face resembled another’s, although many of these figurines inherited identical torsos.”

“The weapons handed to them were real too. I am getting very impatient now, in wanting to travel back in time and come face to face with them again.”

“Besides soldiers, other terracotta non-military figures have been found in other pits, including officials, acrobats, strongmen and musicians, but who knows what else lays buried there, still undiscovered.”

“Haven’t they dug it all up yet?” Isha was surprised.

“Oh no!” Rosh exclaimed. “Excavation is a slow painstaking process, and can take years. First they have to take stuff out without damaging it, then restore it, and then preserve it. The terra-cotta figures currently on display have all been restored from their fragments.”

“Most of the tomb remains unopened to this date, possibly due to concerns about preservation of its artifacts. For example, after the excavation of the Terracotta Army, the painted surface present on some terracotta figures began to flake and fade."

"The lacquer covering the paint can curl in fifteen seconds once exposed to Xi'an's dry air and can flake off in just four minutes. That’s probably why so far, only about four main pits have been excavated approximately 7 metres deep."

"Pit one, the largest pit discovered at 230 metres x 62 metres, contained the main army of more than 6,000 figures. It had 11 corridors, most of which are more than 3 metres wide and paved with small bricks with a wooden ceiling supported by large beams and posts."

"This design was also used for the tombs of nobles and would have resembled palace hallways when built. The wooden ceilings were covered with reed mats and layers of clay for waterproofing, and then mounded with more soil raising them about 2-3 metres above the surrounding ground level when completed."

"Construction of this tomb was described by historian Sima Qian. In his most noted work, Shiji, written a century after the mausoleum's completion, Sima Qian says that work on this mausoleum began in 246 BCE, soon after Emperor Qin had ascended the throne, and the project eventually involved 700,000 workers."

“Wow!" said Isha, finally beginning to get the scale of this project. "How was this buried army eventually found?”

“For years,” said Rosh, “pieces of terracotta figures, fragments of roofing tiles, bricks and chunks of masonry had reportedly been found in this area, but not much attention was paid to these by archaeologists."

“Then in March 1974, east of Xi'an in Shaanxi province, farmers digging a water well a couple of kilometres east of the Qin Emperor's tomb mound at Mount Li (Lishan), a region full of underground springs and watercourses, stumbled upon a part of this hidden treasure.”

“Now Chinese archaeologists came to investigate, and uncovered the largest pottery figurine group ever found in China. In 1980, they also discovered a two-piece Qin bronze chariot.”

“The first piece contained a driver with two seats in the chariot with a bronze umbrella. The second piece had a separate carriage. Both pieces were about 50% of the size of a real horse."

"When the artifact was first found it was in broken pieces. It took five years to restore both the chariots together. Interestingly, this bronze chariot is one of 64 designated historical artifacts that are prohibited from ever leaving Chinese soil."