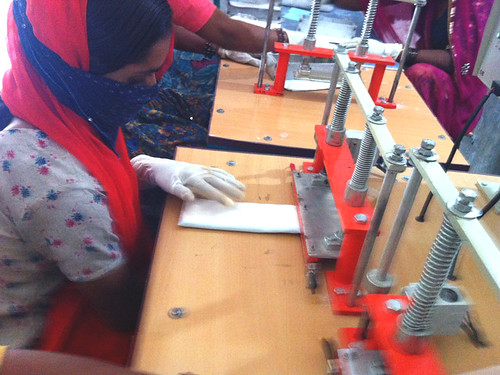 “Now that is a cause worth donating to,” said Isha.

Rosh nodded. The Akshay Kumar starrer ‘Padman’ had been an inspiring watch.

One man’s empathy for his wife had transformed the lives of women worldwide. The film had indeed been motivating infotainment, rather than the mundane entertainment Hindi movies normally offered.

It was based on a true story about Arunachalam Muruganantham, a school dropout from a poor South Indian family, who had revolutionized menstrual health for poor rural women.

Murugan had invented a simple, low-cost, sanitary pad making machine, which was now being used by poor women in developing countries to make cheap sanitary pads.

He stumbled upon the idea of making pads simply to prevent his menstruating wife from using unhealthy rags, as his family could not afford the expensive sanitary pads being sold in the market.

He was subsequently shocked to learn that women didn't just use old rags, but also other unhygienic substances such as sand, sawdust, leaves and even ash.

Women were also too embarrassed to dry these cloths out in the sun, so they were rarely properly disinfected. Menstruation also had other social stigmas and superstitions attached.

Menstruating women couldn't visit temples or public places, weren’t allowed to cook or touch the water supply. They were still the untouchables in an awakening India.

Murugan discovered that his wife wasn’t the only one who suffered from these taboos and risked infection and even possible death from such unhygienic practices.

More than 90% of the women around him suffered the same plight. His findings were echoed by a 2011 survey by AC Nielsen, commissioned by the Indian government, which found that only 12% of women across India used sanitary pads.

Poor menstrual hygiene caused approximately 70% of all reproductive diseases in India. Due to this, millions of poor women worldwide suffered from avoidable painful urinary-tract infections.

Murugan set about doing something about it, but he paid a heavy price for his research and efforts. He was misunderstood and ostracized by his village. His mother and wife left him.

He suffered failures and setbacks. He had no money to buy the expensive machinery required.

But as the son of a gutsy hand-loom worker, who had survived in a city of 446 fully mechanized mills with a simple wooden handloom, he lacked no grit.

Five years later, he had succeeded in creating a low-cost method for making sanitary napkins. IIT Madras entered his machine in a competition for a national innovation award.

There were a thousand contenders, but he won. The award by Pratibha Patil, the then President of India, won him instant fame and glory as well as patent rights to the only machine in the world which could make low-cost sanitary napkins.

He could have sold it then and walked away with his riches. But he didn’t. It was then that his story got even more interesting.

He believed that big business was parasitic, like a mosquito. He preferred business with a lighter touch, like that of a butterfly. A butterfly sucks honey from a flower without damaging it, he said.

This social entrepreneur from Coimbatore, Tamil Nadu - the hometown of Sadhguru Jaggi Vasudev – now set about replicating and distributing his machines.

In the next couple of years, he built and distributed machines in the poorest and most underdeveloped states in Northern India - Bihar, Madhya Pradesh, Rajasthan, and Uttar Pradesh.

Here, women often have to walk for miles to fetch water, something they can't do when they are menstruating - so families suffer.

In the next decade, his machines reached thousands of villages in 23 out of 29 Indian states. A manual machine cost around 75,000 Indian rupees (1667 NZD) - a semi-automated one a bit more.

Each machine converted 3,000 women to pad usage and provided employment for 10 women. Each could produce 200-250 pads a day, which sold for an average of about 2.5 rupees (5c NZD) each.

In each case, the pad-manufacturing businesses were owned by NGOs and women's self-help groups. It was women who produced the sanitary pads, and women who sold them directly to other women.

Now women could finally get not just the product, but useful information on how to use them, directly from another user.

Sometimes, they didn’t even need any money to buy them. Some sales women happily bartered them for onions and potatoes.

Manufacturing women chose their own brand-names for their range of sanitary pads and towels, so there is no over-arching brand. It was business ‘with the women, by the women, for the women’.

Murugan also worked with schools to empower girls. He had found out that 23% of girls dropped out of education once they started menstruating. Now school girls make their own pads.

When the Indian government announced it would distribute subsidized sanitary products to poorer women, but did not choose to work with him, Murugan cast his net worldwide.

He quickly expanded to 106 countries across the globe, including Kenya, Nigeria, Mauritius, the Philippines, and Bangladesh.

Murugan now lives with his family in a modest apartment, Rosh found out soon. He still has no desire to amass wealth.

"I have accumulated no money but I accumulate a lot of happiness," he says. "If you get rich, you have an apartment with an extra bedroom - and then you die."

In 2014, he was included in Time magazine's list of 100 Most Influential People in the World. In 2016, he was awarded the Padma Shri by the Government of India.

What has been his legacy, Rosh thought? “When people felt ashamed to even speak about pads,” Murugan had said, “we made them take photos with pads! Our biggest success was change in the mindset of people!”