The Horse & The Goat 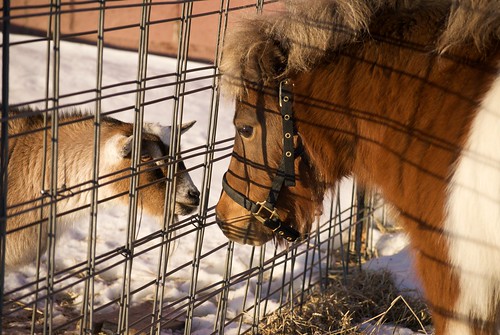 The secret to survival in our corporate world is …

At a new project briefing, Rosh observed one of his contractors unusually quiet.

“You good?” Rosh caught up to him during the tea break.

“Life's a bitch,” the contractor said sadly, shaking his head.

"My new apprentice was going to lose his job, because he was too slow grasping the mechanics of what the job required of him. All his colleagues and bosses were making fun of him. I felt sorry for the poor bugger.”

“If anyone ever tells you, I told him, that your work is unprofessional, remember: Amateurs built the Ark (which saved all the species), and professionals built the Titanic (all died tragically).”

“Out of pity, I also began training him in my own free time. And kept this thing under wraps, so he wasn’t hassled any more than he already was.”

“Sadly, I did it so well, my biggest client ended up giving him part of my job directly, as he was lower pay. My hours were cut down.”

“Bloody economics!” Rosh empathized. “You hit a rate ceiling. Then it became cheaper to replace you than to remunerate you. Retrain! Upskill yourself!”

“I will have to!” the contractor pursed his lips with displeasure. “I have no choice. Life is just not fair.”

“Don’t berate yourself for helping someone out though,” Rosh placated him. “That company would still have eventually found someone cheaper. It happens all the time, in corporates everywhere.”

“Sometimes, the bosses just aren’t smart enough to know which employees deserve recognition. Sometimes, they just can’t see who's actually slogging away behind the scenes to make things happen. Don’t let them steal your happiness too.”

“Learn to work without recognition. It is the secret to survival in our corporate world.”

The contractor gawked at the thought. Rosh looked at him compassionately, but kept sipping his tea.

“I’m no saint,” the contractor said finally. “I can’t learn to think like a monk now. I’ve a family to feed. So, is there any hope for normal mortals like me in your brutal business world? Or not?”

“There is always hope!” Rosh smiled, staring at the bright sunshine outside the Briefing Room window behind the contractor.

‘The world's a sunny place,’ he thought, ‘but you've got to let the sunshine in.’

“A farmer had some horses,” he looked back at the contractor, and continued cheerfully. “Once, a horse fell ill. So, the farmer called in a veterinarian. The vet examined the sick animal thoroughly.”

"He’s in a pretty bad shape,” the vet said finally. “Seems to have caught some sort of viral infection. But I don’t know what!”

“You don’t know what?” exclaimed the distressed farmer. “But you’re the vet!”

“Doctors are not God, you know,” the vet said sadly. “They don’t know everything. There are thousands of viruses, which cause multitudes of diseases - from simple infections to AIDS.”

“Most viruses don’t cause fatal diseases. They are killed by the body's immune system - its network of natural defenses. In many cases, people never even know that they have been infected.”

“But unlike bacteria, which can be killed by antibiotics, most viruses can’t be treated by any medications we currently have. Fortunately, there is vaccination, which helps the body develop natural immunity - to prevent many viral infections, but that is not an option for this sick bugger now, is it?”

“I’ll prescribe him some anti-retro virals and give you some medicine for symptomatic management, but it will only give this poor beast symptomatic relief, get his fever down.”

“Viruses take time to heal. In most types of viral infections, the immune system clears the virus from the body within days. Maybe a few weeks.”

“But some viruses cause persistent or latent infections, which can last for years. In these cases, the infected seem to recover, but illness recurs again later.”

“Keep this horse clean, and in isolation for a week. If he gets worse, you may have to put him down, lest he infect others on the farm."

The Vet gave the farmer the medicines, and left.

The farmer’s goat, who chanced to be grazing nearby, overheard their conversation. He approached the ailing horse, after he had been isolated from the other animals and administered the medication, and said, "Be strong, friend. Recover soon, you can do it!”

The horse felt no better, the next day.

The goat came back, and said: "Come on buddy, get up and get going. Or they'll put you to sleep!"

But the horse felt worse, the next day.

The goat warned him again, “Your clock’s ticking, mate. You're going to die, if you don’t get going!”

But the horse was still down, and more miserable, the next day.

But the poor horse just wouldn't get up!

And so it went. The week passed. The horse got worse, his body feeble, morale down. The Vet came in again to have a look, and pronounced the verdict, “Unfortunately, he’ll have to go. Otherwise, the virus might spread and infect the other horses."

As the farmer walked away with the Vet to see him off, the goat rushed over to the horse and bleated, "Listen pal, it's now or never! Have courage! You’ve got nothing to lose! Get up! Give it all you’ve got!”

The horse made an extreme effort, and got up on its wobbly feet. The goat cheered him on, “That's it champ. You did it! Now move it … Fantastic! Trot, don’t stop now … Great! Gallop, feel the wind … Yay!”

As the horse ran for his life, gaining confidence with each step, and the goat cheering him on, the farmer returned to see a miracle unfolding.

“My horse is cured!” he yelled delightedly. “Blessed be your name!”

“To celebrate this miraculous recovery, he cooked the goat that night!”

The contractor was still gawking, the corporate lesson still unclear.

Rosh sighed, took his empty tea-cup from his hand, and guided him back to the table. The briefing was about to resume.

“Help the horse,” he winked at him, “but keep the farmer in the loop. Whatever you do in future, mark a CC to your boss.”