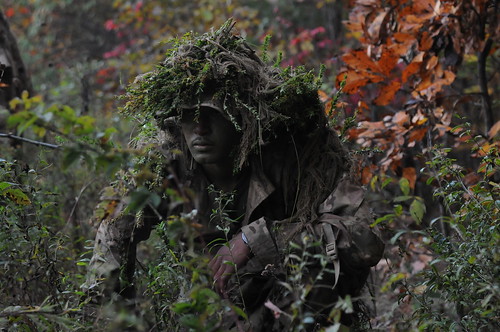 In the darkness within & without, do they know who they shoot at or why?

"Devastating," said Rosh, summarizing the Liam O'Flaherty's story. "So, Ireland was in the throes of a Civil War, with Free Staters fighting Republicans."

"A sniper, positioned on a Dublin roof, and was calmly picking off people with ease. An enemy sniper, on a roof top across the street from him, discovered his hiding place when an elderly woman gave away his cover."

"Curious about the identity of his deadly dead foe, the first sniper went over to see the corpse. And discovered that he had murdered his own brother. Devastating!"

Father and son were silent for some time, each lost in their own thoughts. Finally, Rosh spoke again, "Tell me a bit more about the life and times of the man who wrote this story."

"Well," Josh started, hiding his feet under the duvet on his bed, to keep them warm. "O'Flaherty was born in 1896, in a poor family. World War I erupted while he was still studying at University College, Dublin."

"He left college in 1915, to join the Irish Guards of the British army. He served in France and Belgium, but due to shell shock, was given a medical discharge from the military in 1917."

"During the next two years, while traveling about and doing odd jobs in many countries, he wrote four short stories. But they were all rejected by the publishers. So, O'Flaherty gave up writing."

"He returned to Ireland in 1920, and became involved in politics. In the Irish civil war, he supported the Republicans, who opposed the division of Ireland, and took part in the Four Courts rebellion."

"Wanted by the Irish authorities due to his political activities, he fled to London in 1922. Here, writing once again, he published The Sniper in 1923, in a small London-based Socialist weekly, The New Leader."

"It was a very well-written story, set in Dublin at the time of the 1920s Irish Civil War. Four Courts provided the backdrop for it. The story became so popular, that almost a century after it was first published, it is still widely read in the secondary schools of many English-speaking countries, due to its short length, easy readability, and notable ending."

Rosh nodded. "And your thoughts?" he asked.

"It kept me at the edge of my seat, throughout the reading," said Josh. "The author used short sentences to build up the tempo and kept it exciting, making me want to read more. For example: The turret opened. A man's head and shoulders appeared, looking toward the sniper. The sniper raised his rifle and fired."

"I also found the character of the sniper interesting. He was a Republican soldier, like O'Flaherty. Experienced, efficient, and deadly as a murdering machine, despite his young years. His face was the face of a student, wrote O'Flaherty, but his eyes had the cold gleam of the fanatic."

"Perhaps a reflection of O'Flaherty himself, as O'Flaherty had joined the War leaving his studies in 1915, and spent the next couple of years fighting as part of the Irish Guards for the British Army in Belgium and France. Constantly facing death and having to kill many people, to survive, must harden men into efficient killing machines."

"But efficiency at killing cannot come without acquiring an apathy towards the killed. You can't butcher someone, if you feel empathy towards them. The calm mechanical way in which the sniper goes about eliminating his enemies, as the story progresses, suggests to me that he had acquired that apathy."

"O'Flaherty signaled those signs to our attention when he wrote that the sniper's eyes were deep and thoughtful, the eyes of a man who is used to looking at death. Used to looking, and feeling nothing. Feeling would be a professional hazard here, wouldn't it? You couldn't kill, if you felt for your victim."

"However, as the story progresses, even he gets disheartened and angry about the constant fighting and death around him. He became bitten by remorse, O'Flaherty wrote, cursing the war, cursing himself, cursing everybody. Isn't it amazing that humanity survived, despite the training to make man a ruthless fighting machine and despite extenuating circumstances to which man was exposed to fight for his own survival."

"I was struck by the same thought when I was watching Jason Bourne movies. As I was marveling at these insights, I also came to realize that war can make humans faceless and communities war zones. The sniper's last kill was no ordinary target. It ended up being his own brother. Civil war had turned neighborhoods into jungles, where neighbor fought neighbor, and brother killed brother."

"It diminished human beings to mere shadows and moving objects. They had no names, no faces. They were just targets, nothing more, to be shot at from a distance. Perhaps, to support this theme, O'Flaherty refrained from naming any of his characters."

"Human history is rife with events of ruthless massacre, yet we learn nothing from them. During the American Civil War, which was the bloodiest war ever on American soil, families and friends fought against each other. An example is the Crittenden brothers who were brigadier generals on opposite sides of the conflict - George Bibb Crittenden within the Confederate Army, and Thomas Leonidas Crittenden within the Union Army."

"In the epic battle of Mahabharat, men collectively conspired to kill their own family members, and continued butchering them enmasse, in broad daylight, for 18 days. Reflecting on these parallels with the O'Flaherty story, gave me another perspective on war and on our society."

"People no longer remain individuals in war. They become sides! Wars make people lose their individuality. They no longer remain who they were as individual people, but inherit a new collective identity from the role they play within their group. Their identity just becomes the side, that they are fighting on."

"All because of the choices they made, and the sides they chose. Not humans any more, but troops, just like the faceless blades of grass on the field, to be trod upon without further thought."

"It doesn't need to be this way. Not always. If only we could learn from our past. From our collective human history. But we don't! Or maybe we do learn, only to forget it quickly."

Rosh nodded. "Those who forget history," he said sadly, getting up, "are condemned to repeat it!"