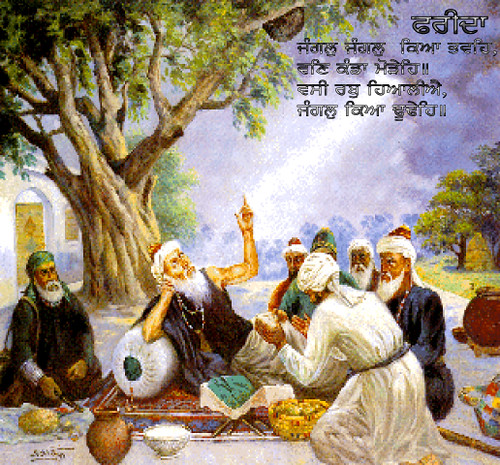 Rosh explained the lyrics as Nusrat Fateh Ali Khan’s soulful voice danced out on the airwaves.

“Who is Fareed?” asked Hosh.

“Farid-ud-din Masud, also known as Fariduddin Ganjshakar, or Sheik Farid, was a famous sufi saint,” Rosh sighed, taking his ear-phones off. “Born around 1175 A.D. in a village called Kothewal, a few km from Multan, in the Punjab region of what is now Pakistan, Hazrat Baba Fariduddin Masood Ganj Shakkar, is said to have been a disciple of the Sufi Qutbuddin Bakhtiyar Kaki.”

“The city of Multan existed when Alexander invaded it in 326 BC. It was an important metropolis on the Multan-Delhi route and is situated on the bank of Sutlej River. It is still famous as the Sufi capital of the world.”

“Fareed was a Muslim, with three wives and eight children, and folklore has it that one of his wives was the daughter of a Sulṭan. Baba Farid's descendants include the Sufi saint Salim Chishti, founding father of the Chishti Sufi order, whose daughter was the Mughal Emperor Jehangir's foster mother.”

“How can anyone have so many wives and kids, and still be a saint?” Hosh asked, perplexed.

“Having sex, or having a family has nothing to do with someone being good or bad, or does it?” Rosh laughed. “Krishna was married, and people call him God. If it is ok for a God to marry, and have kids, why would it not be ok for a saint?”

“Tell me more about this Sufi, Farid,” he demanded.

“The great Arab traveler, Ibn Battuta,” answered Rosh, “once visited Hazrat Farid. Battuta claims that Baba Farid was the spiritual guide of the then Sultan of Delhi, and that this Sultan gifted Hazrat Baba Fareed the village of Ajodhan (now Pakpattan, Pakistan).”

“According to Riaz Padamsee, there are 134 hymns of Sheik Farid incorporated in the Guru Granth Sahib, the Holy Book, and the final Guru of the Sikhs. Many Sikh scholars ascribe the couplets to Farid Shakarganj of Pak Pattan. The tenth in succession to the Faridi seat was Sheikh Brahm (Ibrahim), also known as Farid Sani or Farid the 2nd, and it is this Farid who Guru Nanak Dev met on two occasions.”

“Max Arthur Macauliffe, who has been described as a 'Matchless Scholar of Sikh Lore' claims, however, that the hymns ascribed to Farid are compositions by Farid II, and not of Farid Shakarganj.”

“There are also other scholars who believe that these hymns were composed by different Sufis of the Pak Pattan center, all using the poetic name Farid, as was the custom in those days, as the leader of an order chose his most suitable devotee to take his place shortly before his death.”

“The song I was listening to now, is titled: Turia Turia Ja. It is a collection of some of these Faridi hymns or Farid Bani (meaning words of Farid). Would you like to listen to it?”

Hosh nodded. Rosh removed the connector from the player’s headphone socket and replayed the song for his son. Nusrat Fateh Ali Khan’s voice danced out on the airwaves and Rosh paused intermittently to explain the lyrics:

“Isn’t Turiya an advanced stage of spiritual experience, in which a meditating person’s high-level of self-consciousness cannot be shaken by worldly blows?” Hosh asked.

“It is,” Rosh explained. “But I don’t think Fareed was referring to that in his couplet. His language was that of common folk. And ‘Turiya Turiya Ja’ in local Punjabi lingo just meant to keep walking slowly, to keep going. Stay the path buddy, is what I think he meant.”

"Awaken Fareed, and go broom the mosque.
You’re asleep while your Lord, whom you so dearly love, is awake."

"If you are wise Fareeda, don’t speak ill of others.
Be humble instead, by analyzing yourself."

"Awaken Fareed, and go seek in the world.
If you find an enlightened one, you too will be guided to your salvation."

"Fareeda, be as accustomed as a beggar at the mosque
Who doesn’t abandon his seat despite any amount of ridicule."

"See, Fareed, sugar becomes poison when juice gets drained out of cane.
Without our Lord, could this body (existence) be called bearable?"

"Farid, do not ridicule the dirt. It is inferior to nothing.
Despite being roiled forever under your feet and shoes, it still rides you when you are dead."

"My wooden bread is sufficient to quench my hunger.
Those who feast on buttered breads (good times) have to endure misery too (bad times)."

"There is a legend that Farid once chewed on a piece of wood to quell his hunger, so as not to be distracted from his goal. In the above verse, he is highlighting that one should follow the path of enlightenment to free oneself of desires and their consequent sufferings."

"Be content with your lot, even if it is the bare minimum.
Don’t torture yourself by craving for what others have."

"Let us crave separation. Separation is supreme.
A body that doesn’t realize its separation (from its Lord) is but a corpse."

"Don’t be unnecessarily enamored with palaces, glamour, frills.
No friends or followers will accompany you in the grave underground."

"Forget the deeds which beget no merit, regardless of their temptation
Why be ashamed and embarrassed in the Court of the Lord."

"My clothes are soiled, my appearance is black.
I wander around full of sin, yet people call me a Dervish."