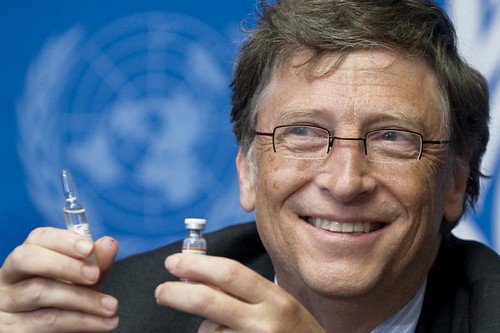 You need the giving mindset, not things, to give away something.

Twice, Bill Gates is given a free newspaper by a poor paperboy

“Bloomberg,” Josh was typing up on the WhatsApp family chat group, “recently released their 2017 list of the ten richest people in the world.”

“Out of 200 billionaires profiled for this exercise, the American, Bill Gates, co-founder of Microsoft, is currently the richest man on the planet with a net worth of USD 86 billion.”

“The Spaniard, Amancio Ortega, founder of the Inditex fashion group, famous for its global brand Zara is the second richest person in the world valued at USD 76 billion.”

“Mark Zuckerberg, co-founder of Facebook, is eight richest in the world with a net worth of USD 50 billion.”

Isha forwarded them a story she had read recently. It read:

“Someone asked Bill Gates, who he thought was richer than him.”

“There is one,” Gates replied. “When I wasn’t rich or famous, I had once wanted to buy a newspaper but didn’t have the money. As I was walking away from the newsstand, the paperboy called me back, gave me the newspaper and said: This is for you. Take it!”

“I don’t have change,” Gates said.

Strangely, sometime later, this story got repeated again as Bill found himself in similar circumstances. The same boy gave me another newspaper free.

After he became rich, Gates decided to find that boy. He found him after a month and a half's search.

“Do you remember me?” Gates asked him.

“Aren’t you Bill Gates?” he was puzzled. “No, I don’t remember meeting you before.”

“You gave me a free newspaper, twice,” Gates reminded him, “years ago. Now, I’ve come to repay that debt. You can have anything you ask for. How can I compensate you?”

“You can’t compensate me!” he said. "I gave you when I was poor. You want to give me when you are rich."

You don't have to be rich or wait to be rich, to give. The real attitude of giving is when you lack. Keep the Spirit Alive…

“I don't know if this story is true,” Josh replied. “But the lesson is good. The attitude of giving or sharing is important, although I think the quantity of what you share matters too…”

“If we are able to get the right message from every story,” Isha replied happily, “its purpose is served.”

“There are no right or wrong messages,” Rosh typed back. “We take what we want, depending on how we are feeling at the moment.”

“Richness is not a number in your bank account, it is a state of mind. I think this story is flawed because the paperboy couldn't have given any free newspapers away - had he felt poor at the time.”

“Only the rich (mentally, even if not materially) give. They are the only ones who can give. A starving mother, with nothing to eat in her house, can give her only morsel of food to her baby.”

“What can those who feel poor, give? One can be materially rich, yet feel poor. They’ll not part easy with anything.”

“To give away something, you don't need things. You need the giving away mindset. Generally, you are either a giver or taker.”

“The idea of repaying your debts (whenever resources and opportunity allow) would have been a great moral of the story, had the paperboy accepted compensation.”

“He could have done more good with that. But he didn't. He fed his ego, denying the richest man on earth - Bill Gates! I guess that’s another way to be compensated. We don’t all want money, or always want money…”

“I think that ending runs against the grain of the story. It also leaves Bill Gates unredeemed, in a way. What messages should it have delivered then?”

“The idea of gratefulness (Gates hadn't forgotten after so many years, and went looking for his benefactor) would have been a great message of the story, but that wasn't highlighted!”

“The idea of perseverance (Gates looked for him for 45 days!) would have been a great message of the story, but that wasn't highlighted!”

“The idea of helping if you can - in whatever little way you can (Don't wait to be rich to give) would have been a great message of the story, but that wasn't highlighted!”

“The idea of unconditional altruism (paperboy gave - expecting nothing in return) would have been a great message of the story, but that wasn’t even mentioned!”

“What was highlighted is a conundrum, perhaps even a paradox! It was the one thing I totally disagreed with in this story. Mental Attitude has nothing to do with your Material Condition. The two are mutually exclusive, really.”

“The paper boy is not richer than Gates - by his own admission. Gates wouldn't think the paperboy was richer than him, just because he refused to be compensated.”

“The Rich don't think that way. Let the story author show at least some respect to someone who has succeeded so brilliantly and so completely, by having virtues and clarity we would do well to emulate.”

“Gates didn't need to seek out the boy who did good to him. Good (and bad) acts are like ripples in a pond of water. They move away from the force that sets them in motion.”

“They don't return to their source. They don’t need to. They spread the goodness (or badness) out - far and wide. This is how I think, good and bad works...”

“I found it interesting that Gates was used as a character in the story to make it more credible, given the challenges of health, sanitation, access to financial services, and agricultural development that Bill & Melinda Gates Foundation is trying to address in the world. Hats off to them.”

“I also liked the punchline in the end: Keep the Spirit (of giving, being grateful, and repaying debts) Alive. Thanks for sharing it, Isha. It was such a message-rich story.”

“Gosh, Pa,” Josh wrote back. “Never thought a story could have so many different perspectives. So much to learn still…”

Next TaleTown Story: My Vivid God