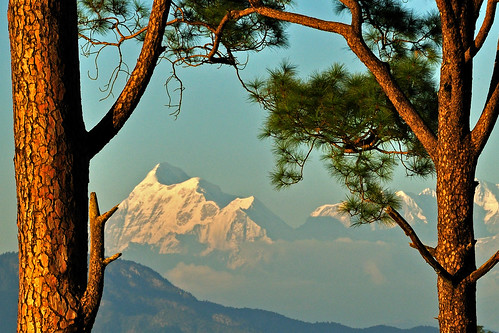 "I want Happiness," a man had once asked Buddha.

He had forgotten how she looked.

He had only seen her for a fleeting moment months ago, when buying his tickets.

Thankfully, he was meeting her at the Ropeway Office after her shift ended for the day.

With racing hormones firing him up with anticipation, he knew he was incapable of safely going anywhere near her workplace before the appointed time.

Yet, he couldn’t wait all day at the Youth Hostel either, cooped up in his room. He had time, and he wanted to soak up everything Nainital had to offer.

So, he had hiked all day. Now from his sun-drenched perch at China Peak, his final destination for the day before he turned back, he looked around at the strikingly beautiful scenery.

A warm golden hue hung over him and his majestic surroundings. He looked at the graceful mountain range lazily sprawled before him and felt at peace.

‘I am happy,’ he realized suddenly, ‘and all I wanted was to get laid.’

‘Strange!’ he thought. ‘I wasn’t seeking either happiness or peace right now. And yet, I have them both. Right here. It cometh without asking, yet its seekers find it not.’

"I want Happiness," a man had once said to the Buddha.

“See,” Buddh had then concluded, “you are left with only ‘Happiness’ now!”

An overwhelming gratefulness rose in his heart, involuntarily. He wanted to say thanks. For the moment. For this glimpse. For everything.

The sun winked at him in acknowledgement and dived behind a cloud. Then the moment was gone. Quite suddenly, the temperature dropped a few notches. A quick breeze rose from the depths of the valley and tugged fiercely at his shirt.

‘Time to go,’ he thought, ‘and meet my sweetheart.’

The thought of what gifts the evening held in its bosom filled him up with sweet expectation. He got up and was on his way back down to the Ropeway. He didn’t want to be late.