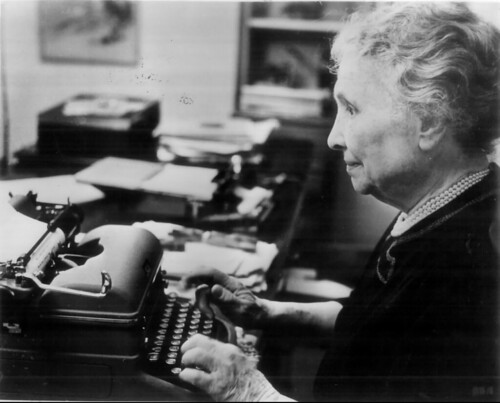 Previous Story: A Cup Too Full

Rosh sat staring at the sunset alone from within his room. He hadn’t spoken to Josh since yesterday.

Isha and Hosh walked in with Josh, who came and quietly hugged his father. He said nothing, but the act was enough. Rosh was overcome with compassion.

“Talk less, listen more,” he said after a while, “Listening is important. Learn to listen more. And you will learn more. Your learning will accelerate.”

“Babies learn almost everything just by listening and watching. They do this for years. Never tiring. Never stopping. Never feeling they’ve learnt enough.”

“Learn to shut up sometime. You have to be silent, to listen. No wonder ‘listen’ is an anagram of the word ‘silent’!”

“Did you know that Helen Keller was a deaf, blind and mute, who listened her way to knowledge and fame.”

“Imagine how hard life could have been for her. Yet, listening helped her overcome all her handicaps, graduate from a college with honors and become a useful citizen.”

“Was she like that from birth?” asked Isha. “Tell us about her?”

She had heard of Helen Adams Keller, but didn't know much about her. Keller had visited India in 1953, over a decade before she was born.

“No,” answered Rosh, “there was nothing wrong with her when she was born. She was a normal child and could speak then. But when she was about 19 months old, she fell so ill that she lost all three of these senses.”

“You see, a baby begins to understand simple words and associate them with objects before it is about a year old. But by then, it has only learnt to make single words or join them into short phrases, like no-no, baba, dada etc.”

“By the time it is about 18 months old, its vocabulary is beginning to build up and it is using gestures more than noise, to communicate. Still, by this age, the most a child can generally do is take your hand, walk you to a bookshelf, point to a book and say “buk” if she wants you to read her a book.”

“She can make basic gestures like push you to say Go, or pull you to say Come. More than this, a child hasn’t generally learnt at this stage. But you need more communication than that in this world. Communication is, after all, a hallmark of being human.”

“This little girl was therefore doomed to a life of loneliness, silence and darkness. She could see nothing, hear nothing, had almost no vocabulary and couldn’t say much.”

“Can you imagine a life like that? You can’t play with other kids, can’t listen to music, walk the streets or have an ordinary life. Consequently, she became quite grumpy as a child. Communication is important for us, you see. It is vital for our happiness and well-being.”

“Fortunately, her parents were quite rich, so they took her to famous doctors. But the doctors could do nothing for her. She was hopelessly deaf. The Kellers then approached the Perkins Institution for the blind in Boston, to see if someone there could help their daughter.”

“Anne Sullivan, a recent graduate from the Institute, came to help this child who could neither see, hear nor speak. Helen was just six, Anne just past 20.”

“Miss Sullivan had an impossible task”, said Isha, “How do you teach someone anything when they can neither see nor hear you, nor speak in any language you understand?”

“Yea”, agreed Rosh, “Well over a 100 years ago, when this was all happening, science and technology weren’t that advanced. We knew much less of the human anatomy than we know now, and we still don’t know much about the science behind infant cognition, or how babies learn.”

“Then the miracle happened. Anne found a way to make herself understood by spelling words on Hellen’s hands to help her associate them with things.”

“She spelled the word “w-a-t-e-r” into the little girl’s hand as water from a hand pump ran over her hand. And suddenly, the little girl understood.”

“Excited now, with her new understanding that things have names, she touched different things. Anne spelled them all out on her hand.”

“There was no turning back after that. Thus began a relationship that lasted almost half a century and made the student and teacher more famous than they could ever have imagined.”

“By the time she was seven, Helen had learnt over 300 words. That wasn’t much when you consider that children learn a word every three days until about 15-18 months, but after that, rather suddenly, they begin learning about 10 words a day. By the time they are seven, their vocabulary is well over 20,000 words.”

“This later learning spurt never happened for Helen because of her illness, but she was bright and curious. Before long, she was using words, putting them into sentences.”

“Anne lived with Helen, played with her and worked with her. She loved her work. She was creating history, helping this child in this way, and it fulfilled her.”

“Using their sign language, teacher and pupil were finally talking to each other. Understanding each other. Enlivening and illuminating her dark silent world again.”

“Awareness does that to you. It lifts your spirit, puts a spring in your step and a smile on your face. Every moment becomes promising, laden with the possibilities of discovery.”

“By 10, Helen was determined to speak. At first, she learned only the sounds of the letters of the alphabet, but soon she was able to say words and sentences.”

“In the story of her life, she writes, “I shall never forget the surprise and delight I felt when I uttered my first connected sentence: It is warm.”

“We fine tune our speech using the sounds we hear in life, seeing the way the other people’s lips move when they make those sounds.”

“Our ears are constantly listening to the sounds in our world, even when we are asleep. Unlike our eyes, they never shut down.”

“Since Helen could neither hear nor see anyone after her illness, this fine-tuning also never happened for her. She said the words, but people didn’t understand them.”

“There wasn’t anything she could say that was worth listening to. She knew she wasn’t ready. But she so wanted to speak. To be heard, and understood.”

“She so knew in her heart, that she had something worthwhile to say. But like you Josh, her time had not yet come.”

“Little did she know that she would toil for 25 more years to learn to speak, yet people would barely understand her.”

“Little did she know that one day large crowds would gather, to hear her speak. They would come to see this miracle for themselves.”

“So Helen focused on listening. And learning. She learnt to read braille - books that are printed for the blind and have raised letters. She had also learnt to use the typewriter to write what she wanted to say.”

Next Story: Then Helen Keller Spoke