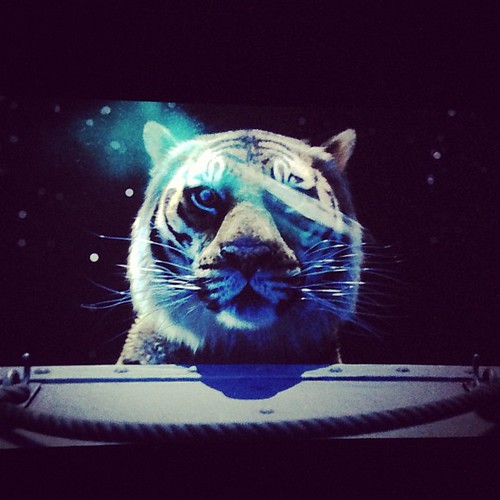 Yann Martel's Life of Pi is reviewed by a school boy.

"Belief requires a leap of faith, and so it is a matter of our choice," he concludes.

"I think there are many messages and perspectives in this film," said Josh, "relating to our will to survive, our capability of doing extraordinary things when forced to change, the importance of storytelling, belief in God, and our desire for companionship etc."

"Survival is the main theme in Life Of Pi. The will to survive is life changing and acknowledged as such by Pi at various points in his narrative. He exhibits it by catching, killing and eating fish despite his vegetarian upbringing. When all his rations are lost at sea, he says: Hunger can change everything you ever thought you knew about yourself."

"It is this desperation to survive that proves to be the undoing of all religious dogmas, cultural values and civil programming of Pi, a person who confessed to have already 'come to faith through Hinduism', 'found God's love through Christ', and 'discovered serenity and brotherhood through Islam'."

"It is this desperation to survive that overpowers his sharp intellect (he fills four blackboards with an accurate calculation of Pi) and channels his strong determination (single handedly re-establishes a new identity at school), reverting him back to his animal instincts and bringing out the tiger in him. No wonder then, that cannibalism becomes a rational choice."

"It is easy to criticize cannibalism in retrospect. With filled tummies, and from the safety of a detached moral, social or religious high ground. I am however, not convinced that any rational being would not have taken the route he took."

"The sanctity of Life is greater than the values Life sanctifies," Rosh agreed, "If one values Life, one must be prepared to change, to preserve it. And if that means sacrificing all the other values, then so be it."

"Pi's will to survive manifests not just as his quest to fight the physical pangs of hunger," Josh pressed his point, "but also in his choice of devices used to fight his mental demons. He eventually trains the tiger, compartmentalising not just the lifeboat but also his mind. Survival of his mind is vital to ensure the survival of his body."

"He writes a diary and follows instructions from the lifeboat's survival guide to keep his mind busy. He tries to follow a strict discipline about 'when to eat, when to exercise and when to keep watch'."

"He plays mind games to preserve his sanity and it is perhaps out of this need that he personifies his fear. 'Without Richard Parker, I wouldn't be alive today', he says in the end."

"Pi's second version is far more believable but it is also far more appalling. Pi told the truth in both versions, but had offered a more palatable one first. Interestingly, the Japanese officials also preferred to report the first version, after they had been given both. This highlights the importance of story-telling. Truth may be necessary, but it is not sufficient."

"Perhaps allegorisation of the initial survivors in his lifeboat was a deliberate attempt by an intellectual to counter his feelings of personal guilt and kill the possibility of encountering social revulsion and antipathy. Pi confesses, 'The cook was very resourceful. But he was such an evil man. Worse still, he brought the evil out in me. I have to live with that'."

"Or perhaps it was just an autonomous response to his traumatic circumstances by a stressed yet fertile mind. Cannibalism was necessary for Pi to survive, and fear kept him alert. But he did not need either when he found the safety of human civilization again. So the tiger left him forever and the unpleasant truths were buried, or at least disguised."

"Man needs more than just food. Magical islands, despite adequately catering for his hunger and companionship needs, hid danger (human tooth clenched inside a leafy pod) and spurred him on in his quest to seek the safety of human civilization and companionship."

"I believe that all the points I have covered relate to our day-to-day world and our lives also. Pi's survival against all the odds illustrates the power of our will to survive, and our ability to adapt quickly and extraordinarily to our circumstances. Human companionship is also an important need and becomes influential once our basic needs are met."

"Although the bulk of the story depends on a deep suspension of disbelief – with Pi and the tiger, both incredibly surviving and even more incredibly coexisting together for months in the middle of an Ocean, it fulfils a stated intention of the author Yann Martel, at the very beginning of his novel. He wanted a story that could 'make him believe in God'. He gets one."

"But whether it is in Pi's tale or in God, belief can only come through a leap of faith. Pi leaves the choice of belief in either, to Yann."

"He had begun by promising: 'I can only tell you my story. You'll decide for yourself what you believe'."

"And he ends with: 'I've told you two stories about what happened ... Neither explains the reason for the sinking of the ship, and neither can be proved or disproved. Which story do you prefer'?"

"The one with the animals", Yann answers after a long pause. "That's the better story."

Next TaleTown Story:  Think Outside The Box