A Cup Too Full 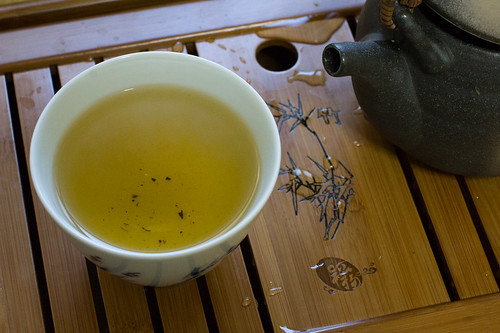 “You are not learning much from your peers,” Rosh was berating Josh, “because you don’t listen much. You have become too full of your own opinions.”

“I can’t help it if I am surrounded by idiots,” Josh replied. “They talk like idiots. They even look like idiots. Listening to them would be a waste of time.”

“They may look like idiots,” said Rosh, “and even talk like idiots, but don't let that fool you. They are beginning to get better results than you.”

“They really are idiots, Pa,” Josh dismissed the observation. “You don't know how hard it is to put up with all the idiots around you.”

“You are beginning to sit on your laurels and have stopped working. Meanwhile, the world keeps plodding along. You were top of the class last year, now many are ahead of you.”

“The teachers in the new class don’t like me,” Josh retorted. “That’s all.”

“I don’t suck up to them like the others,” said Josh. “I’m not a teacher’s pet. And some of these new teachers don’t even know their stuff. They are always asking me to help other students in the class.”

“Nan-in,” Rosh sighed, “a Japanese Zen master, once received a learned scholar who had come to inquire about Zen.”

“As was customary, they went and sat at his table. A kettle was put on the boil to serve the guest tea. Then they started talking.”

“Even though the visitor had come here to learn from the master, he couldn’t resist showing off how much he already knew.”

“The master smiled as he sat listening attentively to his guest. Soon, tea was ready. Without interrupting the flow of his guest, Nan-in served him tea.”

“He poured in his visitor’s cup. The cup was soon full, but Nan-in kept pouring. The tea rose to the rim and began to spill over on the table. Nan-in continued pouring.”

“As the hot water started on its way towards the visitor’s robes, the scholar couldn’t restrain himself any longer.”

“The Cup is too full,” he yelled, shuffling swiftly to get his garments out of harm’s way. “No more will go in!”

Josh stared at his father, trying to make sense of this parable. But Rosh said no more. He waited for the story to sink in.

"He did that just to shut the other guy up?" Josh spoke at last. “That wasn’t a very nice thing to do to your guest. I wouldn’t have visited this rude fellow again.”

“Still finding fault with the teachers,” Rosh flared. “You should open your mind before you open your mouth.”

"If you want to learn, you have to SHUT UP and LISTEN for a change. Sometimes another person has to catch you with your guard down in order to teach you something."

“Knowledge talks, wisdom listens. I’d rather you were as wise as you think you’re knowledgeable. Don’t become like Nan-in’s full cup, in which one can pour no more.”

“It is good to be knowledgeable. But if you are so full already, what more can be added? You need to empty your cup to take in more.”

“Why do I need more,” Josh murmured, “if I have it already?”

“You think you do,” answered Rosh, “but you don’t. You talk down to others. Blame your teachers. You act as though you are wiser than all, but neither your results nor your attitude reflect this.”

“Actions should speak louder than words. Knowledge should make you humble, not arrogant. The heavier a tree becomes with juicy fruit, the more its branches should stoop to the ground.”

"Even if you have the knowledge, there is always more to learn. You cannot learn anything new if you feel that you already know it all. That over-confidence stops your growth.”

"Unlearn it, so you can learn."

Josh stared at his father, his eyes blazing with silent hurt and rage, but he said nothing. Rosh was shocked at his reaction, stunned by its intensity.

‘Knowledge is learning something every day,’ he realized suddenly. ‘Wisdom is letting something go every day. Maybe, it is time I let go. Maybe I am being the cup too full.’

But he couldn’t. He felt duty bound not to give up on his own son, and confident that he had not been too harsh in judging his son’s attitude, underperformance and behaviour.

“Am I being wise and understanding,’ he asked himself, ‘or just opinionated about him?’

‘I’ll watch myself,’ he resolved. ‘And reserve judgment until I’m sure that I am guiding him impartially and being fair to him. For wisdom is what's left, when we've run out of personal opinions.’