Get A Worry Doll 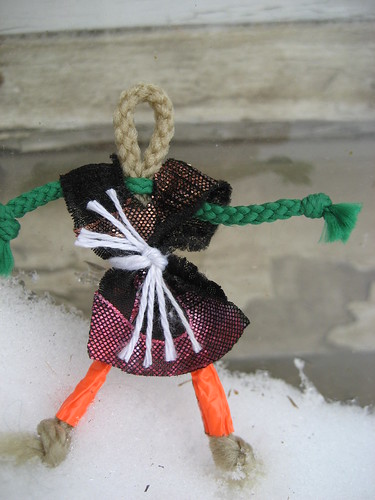 Guatemalan indigenous ancients knew how to delegate worrying to others ...

“Problems don’t go away by themselves if you ignore them,” Isha objected, “You can hide your head in sand like an Ostrich and pretend danger has vanished, but that doesn’t make the enemy go away.”

“Problems are not enemies,” Rosh smiled at her example. “They can be friends. That which does not kill us, makes us stronger. Then why be tense? Life would be boring if there were no problems.”

“Problems need to be solved,” Isha insisted. “To solve them, we need to hold on to them. Think about them. Things don’t work out by themselves. We need to deal with them. Solve them.”

“Putting the glass down seems applicable only to those problems over which we have no control. And I hope, God grants me the serenity to accept the things I cannot change, courage to change the things I can, and wisdom to know the difference.”

“The problem and worrying about that problem are two separate things,” replied Rosh. “I didn’t mean, do nothing about the problem."

"We shouldn’t let our problems takeover our lives like weeds take over a garden, when we don’t do anything about them. I meant just stop them from taking over our minds.”

“Problems still need to be solved and sometimes solving them can take hard work and a lot of thought and planning. But don’t think so much about the problem, that it becomes a separate problem.”

“In focusing just on the problems, we stop noticing what’s good in our lives. Life needs a balanced perspective to be happy and healthy. We need to keep things in perspective.”

“We can’t control our problems anyway. Just their solutions. Worrying more about the problems will not solve them.”

“But it might get them solved quicker,” she retorted. “The wheel that squeaks the loudest is the one that gets the grease.”

“Worrying does not empty tomorrow of its troubles, it empties today of its strength. Yet, I am not saying don’t worry. I’m saying let them go, for a while.”

“What’s the difference?” she asked.

“Telling yourself ‘Do not worry’ is harder to do,” he explained. “Our brain has trouble obeying negative commands. If I tell you, ‘Do NOT think of a blue elephant’, you immediately THINK of a BLUE elephant. Your mind creates one, even though in reality you know it doesn’t exist.”

“That is because the mind ignores the ‘not’ and acts on the rest. So, if you were told ‘Not to worry’, some scholars argue that it is like telling you to worry.”

‘You leave the mire of tension and begin the journey to problem resolution. Because now you can begin to do something about it, or see that there is nothing that can be done about it.”

“It is humane to be disturbed by problems,” Isha insisted. “This is how we have been crafted. It’s all very well to say manage stress, but how do you manage it? How do you Put Your Glass Down?”

“Worry Dolls,” replied Rosh, “are tiny, hand-crafted dolls from Guatemala that local artisans make by binding pieces of wood together or twisting short lengths of wire, or twine into a frame.”

“Cloth or yarn is then wound around the inch-tall frame to give it a doll shape, and then sometimes clothed in scraps from traditional Mayan costumes.”

“Legend has it that the indigenous ancients from the Highlands in Guatemala knew how to cope with stress. Knew how to put their glass down. They created Worry Dolls to worry for them.”

"Kind of like a reverse Voodoo doll?" Isha asked.

“I don't think so," Rosh laughed. "According to this South American legend, when worrying keeps someone awake, the worrier tells it to a doll. Then, they put the doll under their pillow, in a bag or shoebox and go to sleep.”

“They sleep peacefully through the night knowing that their doll is worrying for them. Come morning, the person awakens without the worries that were delegated to their doll during the night. So, just simple stress relief using psychology.”

"Expressing and sharing it," Isha nodded, "helps unlock and release pain. It makes the feelings lose some of their intensity. Do you think it works similarly with sharing worries?"

“I think it helps crystallize the worry, if nothing else," said Rosh. "Sharing worries with other people can help pool minds to seek quicker, and generally better solutions to problems."

"Worry creates pressure. Pressure gets things done. Some pressure is good, but excess pressure must be released. That’s why even pressure-cookers are built with a safety release valve.”

“It lets out excess steam. Excess pressure. Or the cooker will explode. Holding forever on to steam, or pressure is dangerous. Not just for your pressure cooker, but also for the little cooker above your neck.”

“Worrying doesn’t reduce the real weight of your problems. But it does increase the weight on your mind and body. If you can’t think of anything else, get or make a worry doll.”

Note: Reportedly, a version of this doll (Hope doll ‘Tsunamika’), has also been made and distributed in Indian coastal areas of Pondicherry, Tamil Nadu and Andhra Pradesh since 2005. There, it is also in use as the logo of the National Coastal Protection Campaign.

Next TaleTown Story: Mahabharat And Bharat