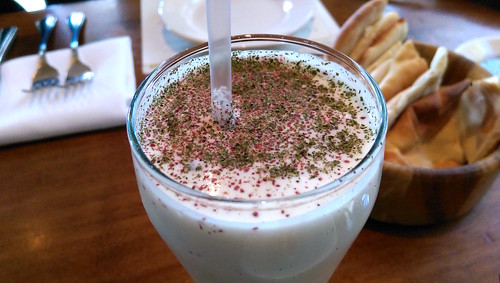 "Aren't the recipe for making Lassi and Raita the same? Why call them by different names then? Isn't that even more confusing?"

"Generally Raita is undiluted," she answered, "or diluted less with water than Lassi generally is. If you are still confused, remember this: Raita is eaten as a condiment with food, while Lassi is drunk."

"People prepare more diluted versions, and call it Chhaas. But Chhachh is technically what is left after butter is extracted from Dahee or cream."

"Straight dilution of yogurt, as we have been doing before drinking it, without extracting any butter, is actually Lassi."

"Matthaa or Chhaach contains more water than Lassi and has the butterfat removed, so it is not as thick as Lassi. Because of Lassi's higher fat content, drinking heaps of it can make you feel lazy and sleepy."

"Chaas is yellowish and has a sour taste. Lassi is whitish and is not generally sour. Can you tell me why?"

"Probably because Mattha was traditionally prepared after cream or yoghurt soured and fermented," Hosh said, "while Lassi is just a straight dilution of yoghourt. So, it hasn't soured yet."

"Yea," agreed Isha. "The thickness and consistency of either can also differ depending on the type of milk used. In Nepal and Pakistan, Lassi is also prepared from Dahi made from skimmed milk."

"Lassi prepared from soured skimmed milk has a weaker taste and flavor than that prepared from the buttermilk obtained from Dahi made from whole milk."

"Just remember that since their naming is mixed up in the market place, you may not always end up buying what you thought you were wanting to buy. But either will do you well, if you just want a tasty beverage."

"But Ma," Hosh asked. "Aren't the recipe for making Lassi and Raita the same? Why call them by different names then? Isn't that even more confusing?"

"Generally Raita is undiluted," she answered, "or diluted less with water than Lassi generally is. If you are still confused, remember this: Raita is eaten as a condiment with food, while Lassi is drunk. So if it is thick enough for eating, consider it Raita, no matter what it is being called."

"Similarly, if it is thin enough for drinking, call it a Lassi in your own mind, although there is no point arguing with others over this. You can even use them interchangeably if you wish, regardless of what you call them."

"Got it," he smiled. "I'll make Lassi today, without you telling me how to. Just let me know later if I do get it wrong."

She smiled and nodded. He scribbled an Ingredients List in his Recipe Book. It read:

She nodded approvingly, then gave him her secret Indian Cooking tip, "I'd use black salt, instead of iodized white salt for Lassi."

"Black salt?" he was confounded.

"Kaala Namak is a pungent-smelling, sulfurous-tasting salt, used extensively in South Asian cuisines of India, Pakistan and Bangladesh as a condiment," she clarified, "or added to chaats, chutneys, salads, many fruits, raitas and other savory snacks."

"It is still sodium chloride, but with several sulphurous impurities, lending the salt its color and smell. It's actually not black, but a brownish pink when whole and light purple or pink when ground."

"Iron sulphide impurity provides its dark violet hue, and hydrogen sulphide is the biggest contributor to its smell. The acidic bisulfates and bisulfites give it a mildly sour taste."

"Although hydrogen sulphide is toxic in high concentrations, the amount present in kala namak used in food is small, so its affect on health is negligible."

"It is manufactured synthetically now, but originally it was obtained from natural halite - from salt mines in Bangladesh, India, Pakistan and Nepal, in certain locations of the Himalayas, or from salt harvested from the North Indian salt lakes of Sambhar or Didwana and Mustang of Nepal."

"Traditionally, the raw natural salt rocks were first treated by a reductive chemical process that transformed some of the naturally occurring sodium sulphate of the raw salt into pungent hydrogen sulfide and sodium sulfide."

"This involved firing the raw salts in a furnace for 24 hours while sealed in a ceramic jar with charcoal along with small quantities of harad seeds, aanvla, bahedaa, babool bark, or Sajji. The fired salt was then cooled, stored, and aged prior to sale."

"Black salt is used as a coolant in Ayurvedic medicine as well as a laxative and digestive aid. It is also believed to treat hysteria, relieve intestinal gas and heartburn. It is used in Jammu to even cure goiters."

"It is also used for making toothpastes by combining it with other mineral and plant extracts, but for me, it remains a vital ingredient in my spice blends like Chaat masala."

"Can I just place all these ingredients in a blender now," Hosh asked, "and blend until smooth? Then garnish with roasted cumin seeds and black salt powder, and serve."

"Simple as that," she agreed. "If not serving immediately, refrigerate in an airtight container for up to 4 days. You can also blend veges like cucumber with your Lassi to give it a bit more texture and bite, but that kind of Lassi is best served immediately, as it won't keep as long."