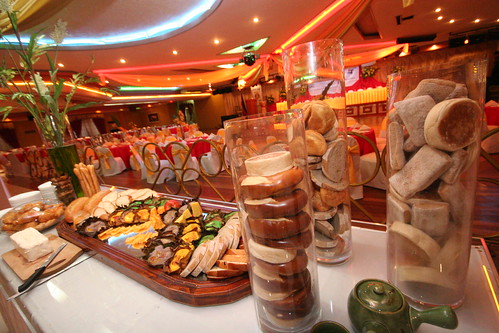 Recent NZ immigrant Rosh takes his family out to dine at an Auckland restaurant.

They have an interesting dining experience.

“Have you taken Isha out to dine yet?” Qosh was asking. “It’s been over a year now since you migrated from India. How’s the new country? How are you feeling there?”

“New Zealand is great,” Rosh replied over the phone. “We’re having fun. And we went out dining too, recently.”

“Incidentally, she had been taunting me just a few days ago, that I was a miser. Hadn’t once taken her out to a hotel to dine... "

“Then what?” said Rosh indignantly. “Just the thought of my hard-earned money being wasted in expensive dine-outs was killing me.”

“The infallible way to win domestics,” advised Qosh, “is to surrender! Admit defeat! Bachelors may not take this advice, but wise, experienced, happily married men would surely agree.”

“That is what I had to do too, in the end,” said Rosh. “There is a buffet restaurant in Auckland, on the Pakuranga Highway, called Valentines. It charges by the people, not by the food. So, you can eat as much as you want.”

“Realizing the gravity of the situation, I decided that we should go dining at Valentines. Going anywhere else and having to pay by how we much we ate would have made us paupers. So, kiddo, wife and I arrived at Valentine."

"Now it is customary here, that people order something to drink before they eat.”

"The menu was on the table. Drinks were being served all around. I sensed danger because wifey was poring over the pages of the colourful drinks menu."

"I fired my first question at a passing waitress. By the way, all the waiters here are extremely beautiful girls. And ultra-attractive is their style."

“Excuse me," I whispered at her. "Do drinks have to be paid for separately here, or are they included in the meal?”

She smiled slowly at my question, and whispered back, “Sorry?”

A knife pierced my heart. I whispered again, "Are the drinks free here, or do they have to be paid for separately?”

Her smile deepened with her instant enlightenment, that this turkey had arrived newly in the country. And was probably eating out at a New Zealand restaurant for the first time.

“The first one is on the house,” she whispered back. “The rest have to be paid for.”

That said, she smiled again cutely and walked away. l felt as if I had been given a life. As I turned back from her, I found Isha staring at me.

“Do you know her?” she asked suspiciously.

“Nah,” I said. “Just asking if the food is so dry here, that everyone is having to wet their throats first.”

“What happened then?” he asked.

“What could have happened?” Rosh continued. “She glowered at me and started reading the menu again.”

“There’s something called self-esteem, after all. First time I had brought her to this restaurant to dine. I couldn’t possibly tell her that I was asking the waitress if they charged for the drinks as well?”

“It was a clean, cool, glamorous place to dine out, Pa. Wall to wall carpet laid on the floor. Shimmering light falling off radiant chandeliers. Flowers, fragrance, music, maidens, all around.”

I was getting my fill just watching the splendour, when the wife asked, “Aren’t you going to get us anything to drink?”

“You want a drink first?” I glowed back graciously. “Order the costliest one you want, but let's limit ourselves to one only. No refills!”

She ordered pineapple juice, but I was busy searching for the most expensive drink on the menu.

Pointing my finger at a drink with a strange name, whose photo was on the menu, I said to the waitress, “This. I want this!”

“My drink actually turned out to be Gin and tonic, even though it came with a tiny, burning sparkler. Cherry, chicken and a dove straddled the glass rim along with a slice of orange.”

“Vast dollops of cream and ice floated in the glass. Overall, it was just like the drink a movie star enjoys while lounging on a beach, no less.”

“When the invoice arrived, the sparkler ejected from the bottom end – but all that later."

‘Well,' I thought, looking at my drink, 'that's at least some of my money back.'

People were staring at me. Even if they weren’t, it felt as if they were all watching me.

When the burning sparkler ended, the wife asked, “Well, aren’t you going to drink it? Its self-service for food here. People are fetching their meals themselves.”

My trouble was that while on the one hand, I had been enjoying watching the sizzling sparkler, on the other I had been seriously weighing up between drinking up first or polishing off the cream in the glass first with a spoon. I still hadn’t decided.

“What’s the rush?” I asked. “We’ll get there. We’ve only just arrived. Let’s first savour our arrival here.”

“Come on, hurry up!” the wife pestered me. “I’m famished. We'd better get it before it’s all gone!”

Next TaleTown Story: What Does Khan Eat?