What Does Khan Eat? 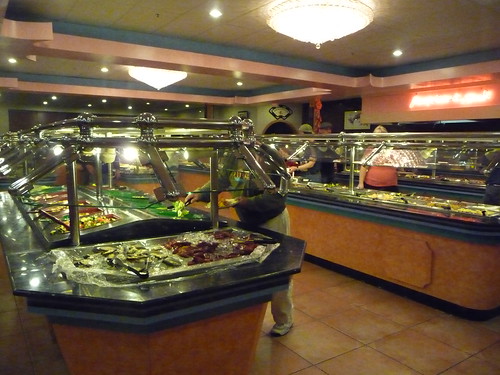 Funny story: What does Khan eat?

Rosh wants to eat his money’s worth while dining at Valentines – a NZ buffet restaurant.

"Now, I couldn’t argue with that,” Rosh continued.

“We had been trained well by our attendances in Indian Weddings, to get cracking on the food as soon as we arrive, lest we go hungry.”

“So, fearful that food in the buffet might finish before we could get to it, I poured the drink inside my throat, and with kiddo and wifey in tow, quickly arrived at the soup-corner.”

“All three took different kinds of soups, in different bowls, and added bread croutons to the soups. I picked up three little packets of butter too.”

That made the wife restless.

“Why are you taking three pieces?” she asked. “I don’t like buttered up soup.”

“There are three people, dear,” I said. “And three little packets of butter. If you don’t want yours, we’ll put one in the pocket.”

“And will you wash the clothes?” came the instant reply. “If the packet opens, or it melts, who’ll take off the stain? Even Surf is $2 per kg here.”

“On computing the domestic economics, I came to the conclusion that I should finish off all three pieces of butter right now. I had to recover my money’s worth, after all. Before long, more butter than soup was floating in my soup bowl.”

“You’re going to get diarrhea if you eat that much butter,” the wife said.

‘All good,’ I thought. ‘Won’t have to buy a laxative to digest this meal then. Money saved, tummy cleaned too.’

“So, I drank up the whole soup. A little stuck to my mustache.”

“Now, tongue is a wonderful tool God created. Roll it over the mustache. Tongue clears, mustache clears, and the goodies on the mustache are cleared out as well.”

“No need for a handkerchief. Anyways, if you cleanup stuff with handkerchiefs, they need to be washed too, eventually.”

“I am one of those people, who do keep a handkerchief in the pocket, but to save having to wash it, don’t use it for months. If no one is watching, the nose gets wiped clean by hand too.”

Qosh laughed at his remarks. His was a funny story. He always had an interesting way of telling stories, but today he appeared to be in full form.

“Until the soup finished,” Rosh was saying, “I was calculating how much value was still to be recovered. The drink was $8, juice so much, soup so much, …”

“Just then, the wife elbowed me again. And said, “Come on, let’s go get our food.”

“I left the accounting, got up, and walked alongside her to fetch my meal.”

“The first food-corner was filled with sea creatures of New Zealand. My mind boggled, when I saw them.”

“I took a couple of pieces of each. Who knew whether anything would be leftover later, or not. I thought, ‘Lord! I will taste fully today, this marine world you created'."

Following my example, wifey took a piece of everything too. For kiddo, we grabbed some jelly, toffee, potato chips and salami from another corner.”

“After filling up our plates to the brim, we returned to our table. People were watching us, but I didn’t care. I had paid for the meal here, I wasn’t gobbling it up for free.”

“But some rascal must have cast an evil eye, throwing a spanner in my works. The moment Isha placed the first marine animal in her mouth, she felt so nauseated that I thought she was going to spew everything out, instantly.”

“She controlled herself with a mighty effort. But she wasn’t going to touch any marine flesh with a barge pole now. But leaving or wasting food on the plate disturbs me hugely.”

“How many in this big-wide world don’t even get two meals a day. And I have never tolerated throwing away food, even at home.”

“By the way, she does the same thing at home. ‘Hosh has left his food. Will you finish it, or should I dump it in the rubbish bin?”

“As if I am there to eat up the world’s garbage. But it is my money that buys it. So, I eat it up regardless.”

“Yea,” agreed Qosh. “What does Khan eat? He eats his stuff, after all.”

“It’s an old story,” Qosh replied. “A Khan was passing by a sweet shop, when he had an urge to buy a piece of Barfi.”

“He paid for a piece. But the shop was crowded. Chaos reigned. In the pandemonium, the shop attendant picked up a look-alike piece of white soap, lying adjacent to the Barfi, rolled it up in a piece of paper and gave it to the Khan.”

“Khan went about his business all day, with the packet in his pocket, relishing the thought of how he would enjoy his dessert after dinner tonight.”

“Then, with great anticipation, he lifted the paper package out of his pocket. Opened it. Placed the tempting white dish in his mouth and started chewing."

"His mouth began to froth up with soap, but the Khan didn’t stop.”

“Son of a bitch!” the Khan retorted. “I eat my stuff. You mind your own business.”

The soap chemicals began to take their toll on his senses.

“Khan!” The friend tried to reason with the crazy Khan. “Spit it out. Or you’ll die.”

"Khan will die," the bewildered man grunted, “but will surely eat his stuff.”

Next TaleTown Story: Read sequel to this story: Money's Worth (Publication Pending)