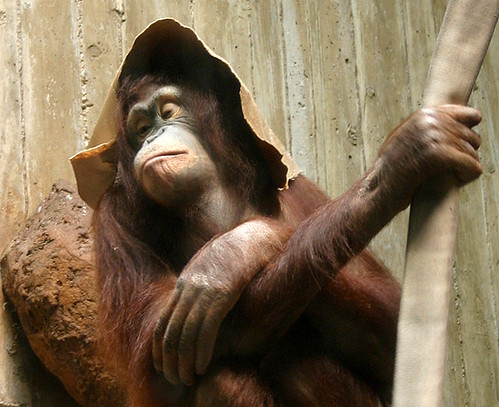 Rosh had gone to the Social Security office to apply for Superannuation, but forgotten to take his driver’s license in the hurry.

Not wanting to come back all the way home, or have to revisit the busy office again, he opened his shirt and showed the lady clerk the curly silver hair on his chest.

“Is that proof enough for you?” he asked, “that I am the right age.”

She nodded and smiled, and processed his benefit application. Jubilant about his successful ingenuity, he bragged to Isha about his conquest when he got back home.

“You should have dropped your pants,” she said, “You might have gotten disability too.”

"When I'm gone,” Rosh retorted, “you won’t find another like me".

"What makes you think I'd want to find another like you!" she returned.

He glared at her but turned away. She could be the limit sometimes, insensitive and rude.

“Are you not going to talk to me now?” Isha realized she may have gone too far.

He went to lie in his bed, not answering her. She knew how to turn him off.

“Ever?” she followed him into the bed.

He glowered at her, but turned on his side.

“A man and his wife,” she said as she snuggled up to him from behind, “were having some problems at home and were giving each other the silent treatment.”

“Suddenly, the man realized that the next day, he would need his wife to wake him up at 5 AM for an early morning business flight.”

“Not wanting to be the first to break the silence (and Lose), he wrote on a piece of paper, ‘Wake me up at 5 AM’. He left it where he knew she would find it.”

“The next morning, the man woke up, only to discover it was 9 AM. He had missed his flight.”

“Furious, he was about to go and see why his wife hadn't wakened him, when he noticed a piece of paper by the bed. The paper said, ‘It is 5 AM, Wake up’.”

Rosh laughed, covered it up with a cough, but did not turn towards her. He feigned a yawn, but she was having none of it today.

“A yawning man demonstrates his impoliteness,” she giggled from behind him.

“And a yawning woman – her capabilities,” he fired back.

They wrestled for a while, and then she showed him her capabilities. She knew how to turn him on.

He turned back towards her finally, and looked at her with loving mirth.

"I don't know how you can be so stupid and so beautiful, all at the same time," he said.

“You know about the left and right brains, don't you?" Rosh took her gambit.

"Yea, what about them?" she waited.

"Strange thing about women's brain", he answered, “there's nothing right in left side, and nothing left on the right side.”

And then they were at it again …