Fetch Him At Once

Previous: The Birth Of Birbal 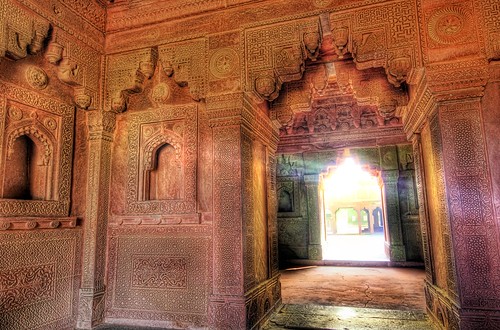 The crows were unusually silent the next evening. They hopped branches to keep up with the walking duo.

"One morning," Rosh was saying, "Akbar woke up in a foul mood. Grumpily, he called out loudly to his attendant: Quick! Call him at once!"

The attendant curtsied and left quickly, glad to be going away from him when he was in such a foul mood.

But as he was stepping out of Akbar's chamber, he realized he didn't know whom His Lordship had asked for.

Instead of risking going in again and asking the Great Moghul himself, the attendant thought to ask the guard stationed outside his chamber.

Since the Emperor had loudly snarled out his order, surely the guard must have heard it too, he reasoned.

"Did you hear what Jahanpanaah (Emperor) just said?" he asked the guard.

"Then go and fetch him at once," the attendant ordered.

"Fetch whom?" the guard asked.

"Whom Jahanpanaah has ordered to be fetched," the attendant answered.

"And who is that?" the baffled guard asked.

The attendant shook his head testily. It just wasn't proving to be his day, and this guard was more brawn than brain anyway.

"You said to me that you heard what Jahanpanaah just said!" he labored patiently.

"I did." came the similarly labored reply.

"Then go fetch him!"

"But whom does Jahanpanaah want fetched?"

The guard saw the attendant beginning to get all itchy and jumpy. He was getting upset too with all these vague instructions. It was an attendant's job to do the fetching, not his.

'Patience,' he thought, 'this moron can make life really difficult for me.'

He smiled at the attendant, trying hard not to get on his wrong side. A full-on smile. Without one tooth. It made the attendant more itchy and jumpy.

The attendant looked at the smiling ape in front of him, took in a few deep breaths, and started again slowly.

"You agreed before, that you had heard Jahanpanaah's order," he spoke up again.

"You heard that Jahanpanaah wants someone called here at once."

"Then what are you waiting for? Go fetch him?"

"Whom does Jahanpanaah want fetched?"

The attendant tore off his hair in anguish.

"You fetch him," the guard could take it no more. He was done trying to be nice.

"Ok!" the attendant tried desperately, "Whom do I fetch?"

"Whom Zill-e-ilaahii (Emperor) wants fetched!" the guard barked back.

This was getting nowhere, but what else could he could.

'I'll sort you out another day' he thought, 'but today you've got me, and it's hurting'.

"Did you hear whom Zill-e-ilaahii wanted?"

"I'm not talking to you anymore," the guard waived him off.

"You're distracting me from my duty," the guard ignored him.

"I'll give you sweets left over today from the Royal Kitchen."

The guard looked away, but remained silent.

"And smuggle some out for your family."

The guard looked back at the attendant, but said nothing.

"If there isn't much left today, I'll do that for you tomorrow too."

The guard's face finally lit up.

"Only if you promise," said the guard, "to stay here in my place while I'm gone."

"A thousand promises," said the attendant, "I won't budge from here till you are back. With the mood Zill-e-suhani (Emperor) is in today, do you think I'll risk it going in alone?"

The guard nodded and walked away. He knew Akbar's moods. When the Baadshah (Emperor) was in such a mood, no one felt safe. Halfway down the steps, he realized he still didn't know whom to fetch.

He came back again, and asked the attendant, "But whom do I fetch?"

"You mean you don't really know whom to fetch?" the attendant asked, fear suddenly rising in his throat.

The guard shook his head.

The guard shook his head again.

'Whom does he want?' he racked his brains, 'I'm pretty sure now, he didn't name anybody in particular. With him in such a foul mood, if I delay, I'm done for. If I get the wrong person, I'm done for. If I go back and ask him now, after this Oaf has wasted so much of my time, I'm still done for.'

"He is, isn't he?" Rosh agreed, "What would you have done in his situation?"

"I would have gone in and asked Akbar," said Josh.

"Well," said Rosh, "this attendant didn't. He feared for his life. The risk was too much. In those days, Emperors were judge, jury and executioner all at once. If you made them mad, there was no court. No appeal. The Emperor was law. The Emperor was the Court. Aren't you glad, you live in a democracy?"

"You mean Akbar could have taken off his head for asking a question?" Josh was astounded.

"He sent off his own regent, Bairam Khan, to Mecca" said Rosh, "He struck down his own foster brother Adham Khan and threw him down from a terrace into the palace courtyard at Agra. Still alive, he was dragged up and thrown down once again until he finally died."

"When the Mirzas, a group of Akbar's distant cousins who held important fiefs near Agra, revolted against him, he had them slain and driven out of the empire."

"Akbar was a bad boy. But that is why his journey through life, his struggles, his transformation and finally his achievements for the betterment of his people are so much more marvelous."

"What happened then Pa?" asked Josh.

Next: Logic Only Reduces Risk