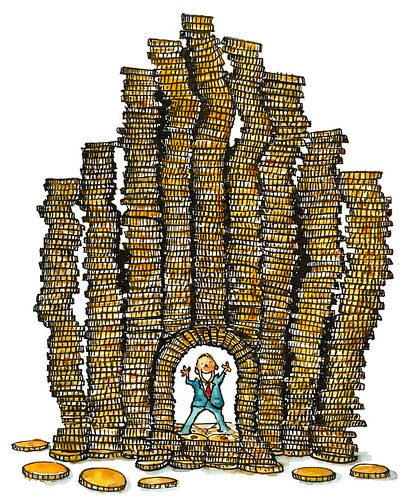 Concentration of Kiwi wealth in houses may be concerning, but it has helped NZ stand out as the best deliverer of prosperity in the world in the past decade.

World’s wealth was increasingly becoming concentrated in the hands of a few, thought Rosh.

A 2015 Credit Suisse report had found the richest 1% owning exactly 50% of the estimated global assets of USD 250 trillion.

Now, just 8 men owned as much combined wealth on earth, as half the human race.

The Global Wealth Pyramid in the Swiss bank reports made interesting reading. The 2014 UBS (Union Bank Of Switzerland) Ultra Wealth Report had also stated that only 30,000 (just 0.004% of the world) ‘Ultra high net worth individuals’, owners of 30 million USD+ of assets, (of whom maybe 1,000 lived in New Zealand) held an astoundingly disproportionate 13% share of global wealth.

Only 02 million people on earth, owned between 5-30 million USD of wealth.

So, only 25 million people (0.33% of the world’s 7.5 billion) had net assets of greater than 1 million USD. In New Zealand, many thousands of houses were worth more than USD 1 million.

Interestingly, it calculated that New Zealanders were the fifth richest people on earth currently, with an average Kiwi adult owning USD 299,000 ($422,700). When revised for median wealth per adult, New Zealand moved up one spot to be placed fourth after Switzerland, Australia, and Belgium.

Had we suddenly catapulted into prosperity this year? Not according to the Legatum Prosperity Index, which said that for the past decade, NZ has stood out as the best deliverer of prosperity, because of its ‘unrivalled ability to turn its wealth into prosperity’ - a broader measure than just money.

The recent capital market appreciation and exchange rate improvements had helped sustain prosperity in New Zealand as a whole, and not just limit it to a select few.

Still, inequality also existed, since the top 10% of Kiwi households had around half of total New Zealand net worth.

But this wealth pattern was consistent with OECD average. Our richest 1% households had 18% of total net worth, again same as the OECD average, but slightly higher than in Australia (where the top 1% owned 13%).

In his recent weekly newsletter, Chris Lee had noted that Kiwis who earned more than USD 28,000 (NZ$40,000) annually, were amongst the top 10% of salaried earners globally. Also, that any retired NZ household with tax-paid annual income of over NZ$72,000 was in the richest 3% of all retired households in New Zealand, and amongst the top 1% of superannuitants in the world.

Yet, almost a quarter of Kiwis were receiving financial help, with over a million (in a nation of 4.5 million) on a benefit (including the means tested Working for families, and the not-means tested NZ Super).

Only a tiny minority of NZ retired households owned shares, bonds, bank deposits or rental properties. The median retired household had around NZ$30,000 in bank deposits, shares, bonds or other non-household assets. But, the universal NZ pension entitled a retiree a government guaranteed pension that probably had a capital value of around $300,000.

Holiday homes, timeshares, commercial and residential investment properties, and land made up the ‘other real estate’ category. This accounted for only 16% of the total non-financial assets held by New Zealand households, and only 8% of their total household asset value. Still, more than 1 in 10 (14%) of New Zealand households owned real estate other than the home they lived in.

Almost a fifth of Kiwi households (19 percent) were involved in a trust. This meant that at least one household member in 322,000 households (those who were only independent trustees excluded) was involved as a settlor, beneficiary, trustee, or had another type of involvement in a Kiwi Trust.

If your net worth was over $815,000 in 2014/2015, you were in the richest 20% Kiwi households (top quintile). This top quintile had more cash and deposits, shares, equity in trusts and businesses, and other financial investments, and less debt relative to lower quintile households.

So, not all the Kiwi wealth was stored in houses. The question now was, how much of it was diversified overseas?

Next Story: Let Them Grow Roots